After you read this click here to see more of our holiday travels. 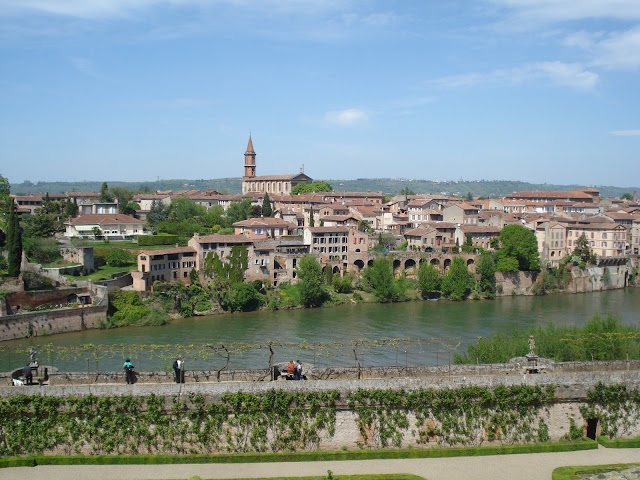 This is my RED for Ruby (Red) Tuesday. Most all of the roofs in Albi, France are made of red tile. The older ones dim, the newer ones can be very bright red.

While taking this picture, I was standing beside the Musée Toulouse Lautrec (museum) waiting for it to open. All of these ancient buildings are across the river.

In Southern France the Spanish influence shows to quite an extent. One of the major items is the closing of all businesses and most public facilities two hours for lunch. They close at noon and reopen at two. I do not know if they take siestas or not. 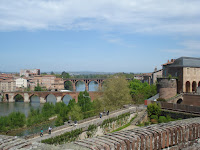 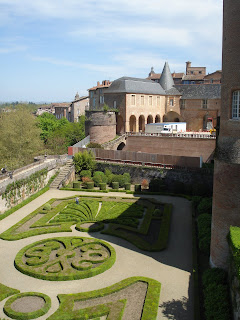 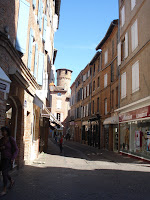 Below me was a very pretty French type garden. I did not go down into it, son, Tim, did. He also climbed to the top of the wall in the left picture and walked to the end.

In the center picture, all the green is shrubbery and is manacured with hedge clippers. I don't think there will be any flowering plants in this garden even later in the year. I don't have a picture from down there, it's a wonder since I did walk around in there.

The right side picture is the type of streets that we would walk through to get back to our car. 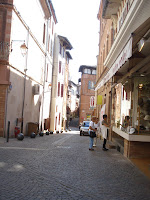 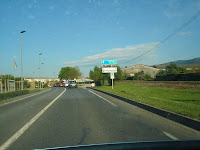 It's hard to pass up an information center. This one was full of posters, I choose this one for a snapshot because it showed what we had seen taking the pictures above.

If it bothers you that there are no pictures from inside the museum, that is because picture taking inside is not allowed (link to 'about' the museum).

The picture on the right says we are headed back to our hotel. We must pass through Mazamet on the way. 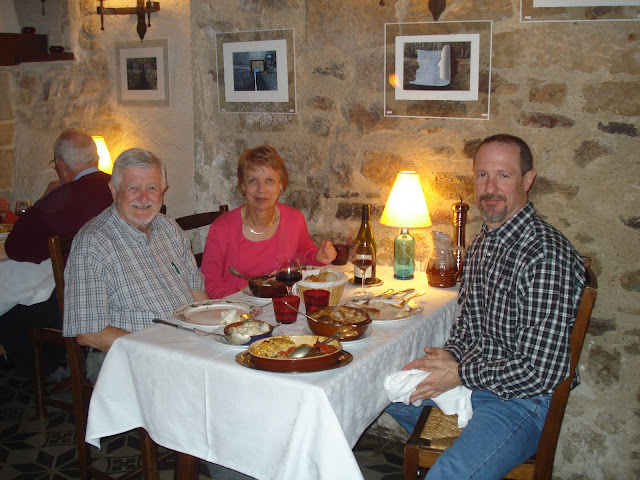 Supper was ready at our hotel dining room when we got back. People really don't start on the evening meal until around eight but we Americans like it earlier. Our reservations were for seven-thirty.

We are just starting on the first course, we had been served but before we started eating our waiter, the hotel owner, Frederic, took our picture. Clockwise, Mrs. Jim, (son) Tim, and moi (Jim). 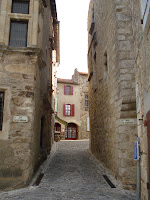 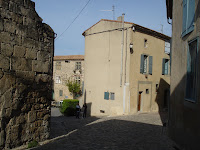 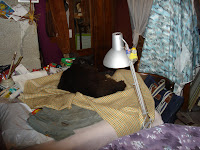 Back in town now and the next morning after our trip to Albi, we went for a little walk around our town.

Walking down now, but we drove up this narrow street to find out hotel. Further on down behind that little green bush we found the studio of an English artist. He has been painting in Caunes-Minervois for five years and considers the town his home.

One of his favorite subjects is his cat. We just woke him up from an early morning nap but he didn't seem to mind. The owner/artist told us his name but I can't remember it. I am not good at names. 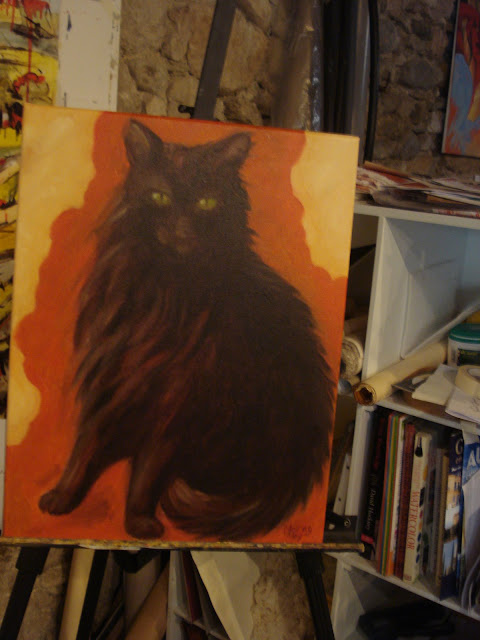 This pretty work is just about finished and is for sale now I can't remember the price.

The last two pictures give an idea of what the inside of an artist's studio might be like. Except for the cat and the painting, it looks similar to my office, a little messy.