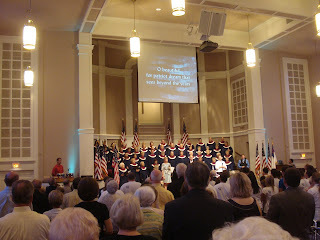 Our 4th this year started with our Sunday service at church. It was very patriotic. Us ex-GI's even got to stand up, I stood when they played The Caisson Song. 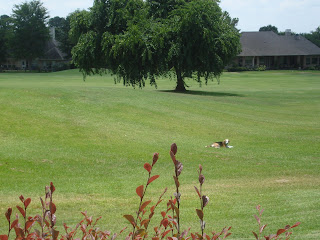 Adi hangs out on the golf course whenever she has a chance. She likes to lay motionless on the warm grass.

Here Adi got up to pose when she heard me turn the camera on. Isn't she pretty?
(Terry asked what Adi would do on the 4th so I added this picture. Adi will have some ice cream and a hot dog too.) 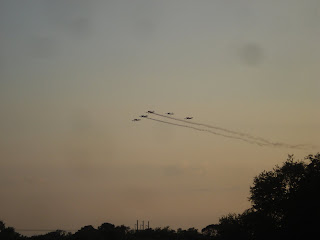 The evening of the third we celebrated at home. There was a twilight fly over. These are retired pilots in the area who just can't give up flying. 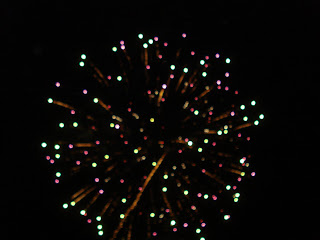 Then at 9:30 (almost dark) we had a very nice fireworks display. Mrs. Jim and I went up fairly close using the golf cart to get over there. Some years we watch from out balcony at home.
.
The rest of my Fourth of July post is repeated from last year.
..
Last year we were in Tekamah, Nebraska, for Blogspot '08. There is not a Blogstock '09; this will be a memory of a very fun time.
Click here for the rest of my Blogstock '08 posts. Mrs. Jim made this poster, actually two each of them, for our float in the 4th of July parade in Tekamah, Nebraska. Adi couldn't come so we at least could put her picture on the float. On the way to Tekamah with our posters we stopped at the Herman Cemetery to visit Mom and Dad's grave. The mowers had left a lot of caked grass on the tombstone and on the base. We didn't have much to wash it off with but did what we could with a bottle of drinking water. This was part of the crew working on the Blogstock '08 float. On the left is Mrs. Jim being supervised by Mrs. Morrow, next Cliff Morrow, Rachel of Sliding through Life, and Mrs. Morrow's mother.

Jim likes to hang out with people who like to eat. Here is a part the Jim Bunch but more so, the Cliff Bunch this time, having our salad before eating. From the left, Jim, Mrs. Jim, Terry , News Editor of the Midwest Producer, Jerry of Back Home Again, and Cliff of Cliff Morrow's Blog.

The meal was completed with Karaoke singing. Here Terry and Cliff are belting out a tear jerker Country and Western song.

THIS LAND IS YOUR LAND
words and music by Woody Guthrie

Chorus:
This land is your land, this land is my land
From California, to the New York Island
From the redwood forest, to the gulf stream waters
This land was made for you and me

As I was walkin' - I saw a sign there
And that sign said - no tress passin'
But on the other side .... it didn't say nothin!
Now that side was made for you and me!

In the squares of the city - In the shadow of the steeple
Near the relief office - I see my people
And some are grumblin' and some are wonderin'
If this land's still made for you and me.

Do you remember this -- MidWeek Blues 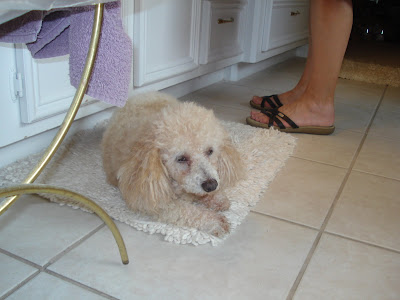 "Help me if you can, I'm feeling down
"And I do appreciate you being round.
"Help me, get my feet back on the ground,
"Won't you please, please help me?"

Sound a little familiar? Here is the credit (click) 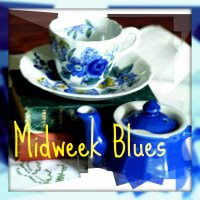 To post your MidWeek Blues picture click on the logo at the right for directions from Rebecca. She has a Mr. Linky and good directions. Just do what I did.

I know these folk don't want their vices known!
I will expose all today for 'Ruby (Red) Tuesday.' 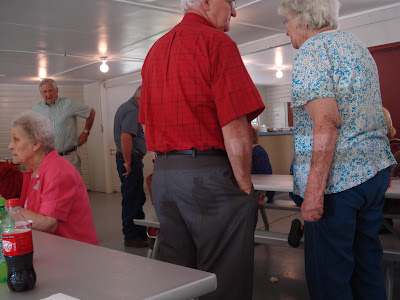 What is my red-shirted preacher cousin and golf playing buddy carrying in his back pocket? You may have to click on the picture to get a closer look. 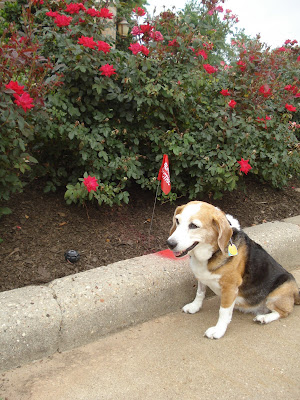 Why is Adi standing in the street looking at the red roses when her sidewalk is right beside her. (A hint is shown in the bottom picture.) 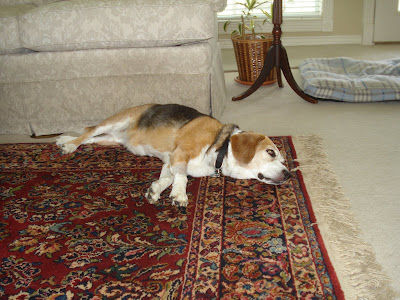 Why is Adi sleeping on the red rug when one of her beds is right over there? She does have four beds to choose from; she lays on the floor? 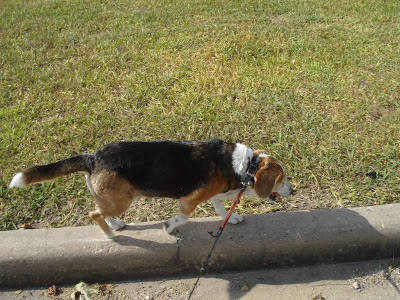 There doesn't seem to be anything wrong with her sidewalk for dogs?

Answers:
Top: This is a shadow projected from that Coke bottle sitting on the table.
Next: Bottom picture answers it.
Third: I don't know. Today she is sleeping on her red checkered bed I brought into the living room. Her Aunt Velma got that red one for her way back.
Bottom: Is the answer to the second. I had Adi walk in the street to pose for that picture. Now she is on her way. She likes to walk the curb. Probably she would do fine on the high wire.

post has been pulled by author due to lack of sincerity

Anyone can find it IF they click my tag, 'Palin.'

I like William's rendition better, Sarah never was a speaker.

Sarah Palin pardons one Alaskan turkey but the rest have to go.

Keep watching into the second minute for her outside interview. Outside in front of the turkey killing and bleeding machine, watch the operation (be warned that two turkeys get killed during her interview) and hear the second interview.
.


http://www.youtube.com/watch?v=N22l3cmNksk
.
I wonder what they do with all that blood that's in the tank. I suppose this beats the old fashioned axe to the neck, or like my Mom did with the chickens, pull their heads off by putting her foot on the neck and pulling on their feet.

At least in that machine we don't have to watch them flop around like we did back on the farm.

Oh yes, Ms. Palin, what was she saying?

Also on the Internet here
The PETA blog on topic here

Notes: Genesis 9:2-3 (Bible):
2 The fear and dread of you will fall upon all the beasts of the earth and all the birds of the air, upon every creature that moves along the ground, and upon all the fish of the sea; they are given into your hands.
3 Everything that lives and moves will be food for you. Just as I gave you the green plants, I now give you everything.
[The entire account of Noah and the ark, the animals, and the flood can be found in Genesis, Chapters 7, 8, and 9 (link)]