— My Alphabe-Thursday (2nd), the letter "O" / Thursday Two Questions — Did you ever? 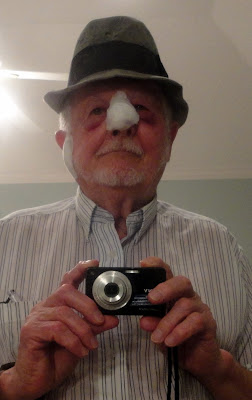 "O" is for "OH!!!" today.  No it isn't for my nose bandaged or the story behind it (mohs surgery for basal cell carcinoma, four cuts/digs).

"OH!!!" is for my exclamation when I found this camera Tuesday in the dryer.  I heard the dryer making a thump, thump, thumping sound like it does when you have washed your tennies and are machine drying them for a bit (don't let them get hot, the rubber soles, etc, can't take the heat good--besides they will shrink).

No, this "OH!!!" came when I looked in my freshly washed blue khakis pocket and found the camera.  I had washed it with the pants.  After recharging the battery and sun drying for two days, it doesn't work.  Nada.  No light, no display, no noises, just nothing.

[click on pictures for larger size]
It was a Sony W-560 that I had ordered from Amazon dot com.  This, below, is the first picture I took with it on May 31, 2011.  The camera came to my sister (Lois) in Iowa and the driving shot was taken just north of Cedar Rapids. 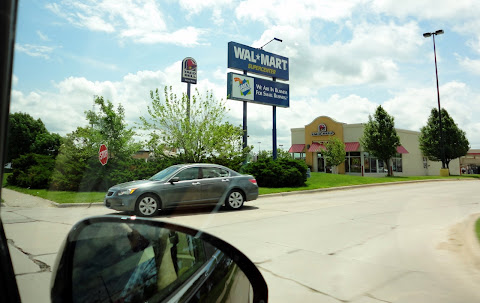 I will quickly shop for another Sony.  Both Sony pocket cameras I have owned have taken over 10,000 pictures.  So did the Kodak.  Adi killed the Kodak when with her wagging tail she pulled it off the shelf by the charging cord.


- - - - -
==> You can see other "O" letter posts by visiting Jenny's blog post, Alphabe- Thursday. My letter "O" portion of this post will be critiqued by Head Mistress Jenny. I always hope for a good grade.

My last post last week was about an "N" word group, the National Maritime Museum in Sidney, Australia.  My questions were about discrimination and travel.  A bunch of you have or are facing discrimination of sort.  Perhaps most all of us are--I'm an 'elderly person.' which is a cuss word for a senior citizen.

1. When did you last--did you ever wash or wet something that doesn't tolerate getting in much water?
Not me, but my kids are always 'washing' their cell phones.  Like in the toilet, ship channel, or off the car bumper into a water puddle.

2. What  is the average life span for you camera?
I measure mine in years and months and also in the number of pictures it has taken.. Up the street from the Blair (Nebraska) MacDonald's on a snowy December morning. We would end up with about six inches before the snow stopped coming down.

Set the scene from the fresh snow picture above.  My friend, "J", was late for work that evening at the tracking station atop the mountain in New Hampshire.  He was due to come in at 3:00 PM to do his job as Video Recorder position.

"J" did come slinking in at about 4:30.  Another friend had pulled his late model Chevy convertible out of the snow-filled ditch.  "J" was alright now, so he said, but he did lose consciousness when his car was stopped by a tree.

One thing to add.  "J" was from California and his Chevy didn't come with a heater so he kept a kerosene portable stove burning on the floorboard.  It was still heating when the rescuer came.  Lucky for all of us there was not fire.

It was often said that "J" would be 'late for his own funeral" as he was habitually tardy for everything including work and even parties.

At the funeral we were told that "J" was late for his own funeral but his body should come before evening.  He had been visiting his girl friend up north and had a heart attack and died there. 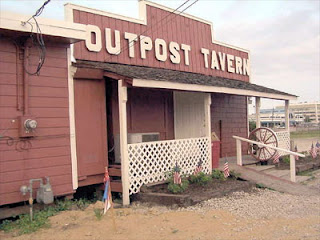 Now the airports were closed and all the planes were grounded.  Flights were to resume but were running late.

We had the funeral without "J" and then retired to the after funeral party at the Outpost Tavern in Webster, Texas.  Reference the year 2000 movie, "Space Cowboys" (link).

The tavern burned down in October, 2010 (link). Our NASA work group held a retirement luncheon there once a month until the fire.  It had been a popular hangout for Astronauts, Flight Controllers (me), and JSC NASA employees during the Gemini, Apollo, and Skylab NASA space missions.

At the funeral one of my other friends giving a eulogy said that women had been very fond of "J" and that could be witnessed by his four ex-wives present for the funeral.  His body did come to the church around five and several of us went over there for a late viewing.

Two Shoes Tuesday is a place for bloggers to share what we enjoy doing most... writing! Each week Josie provides a one-word writing prompt and invite us to share a short story, poem, essay, thought, or photo relating to that topic.

The writing prompt this week for February 27, 2013, is "procrastinate". For a list of and links to those participating, go here.  I am just a little late for this Tuesday post myself as today is Wednesday.  I have excuses.
.

No room for you here, Water Lily!

Don't holler at me, Xerophyte! Get your junk off, there's room for us both.

My wet stuff! You're throwing it!


Picture prompt furnished by  GMa's Goulash, Succintly Yours 101 post
Optional, Word of the Week: xerophyte -- by Pat and Jerry
Rules: Use the photo as inspiration for a story.
..Maximum of 140 characters OR 140 words.

Note: xerophyte: any plant adapted to life in a dry or physiologically dry habitat (salt marsh, saline soil, or acid bog) by means of mechanisms to prevent water loss or to store available water.
see www.britannica.com/EBchecked/topic/650706/xerophyte for more