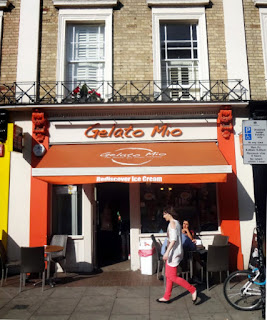 1. Ice Cream Starts with "I" :  In my world of eating, and blogging (link to past SOME of my past posts), "I" definitely is for Ice Cream.  I Scream for Ice Cream!!!

At the right is the neighborhood Gelato Mio store in St. John's Wood, London, U.K. (link) The store is on High Street, like the U.S. "Main Street", for St. John's Wood, this town in Westminster, is home for Paul McCartney not and the old London Stomping ground for the Beatles.

Their first recording school was on Abbey Road there, and only a block from our Daughter, KP, and SIL, who lived in London for five years, all but the last two months in St. John's Wood.

While we were in London, staying with the kids, we would make a visit to Gelato Mia more often than once a week, i.e., we were 'regulars'.  The ice cream, European Gelato, was to die for.  My favorite was Raspberry Amaretto in a Waffle cone.

Now for the ice creams that we eat here at home:

In order of our likes:

1.  Blue Bell Light -- for a long time Blue Bell was shut down due to a bacteria run loose in their plants.  Finally this was all scrubbed out and disinfected and things were back to normal.  Almost.  Our favorite flavor, this Light variety, was the last to start production, months behind the regular flavors.  It was also Adi's favorite. (link)

2.  This should have been "Dryer's French Silk" but I got the wrong kind and so we eat chocolate again.  KP will help us with that, she has several kinds of chocolate that she likes.

Not very obvious on the package, but 'Slow Churned' flavors are also their Lite ice cream, of which classification French Silk belongs.

3.  Blue Bell Dutch Chocolate is KP's favorite.  It is regular ice cream, not 'light'.  For chocolates, this is also our favorite.

We always keep chocolate on hand for KP.

4.  Blue Bell Butter Crunch is sort of like having Butter Finger bars ground up and mixed into the ice cream.  Not being light, we eat this one sparingly but it is really good.

Often with our Blue Bell Light we cut up a Butter Finger or a Reese's Peanut Butter Cup bar and sprinkle that on the top of the ice cream.

4.  Kroger Chocolate is very dark and chocolatey, KP likes this one next to Blue Bell.   Kroger's 'Private Selection' ice cream is very fine, almost as good as Blue Bell.

2. Week's Favorite:  Not too much going on, lots of TV news: (I did get the car inspected get the license plates updated) 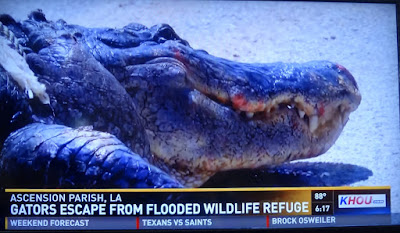 Floods in neighboring Louisiana were still bad.
Alligators had escaped from their habitat. 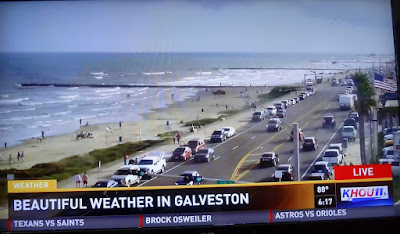 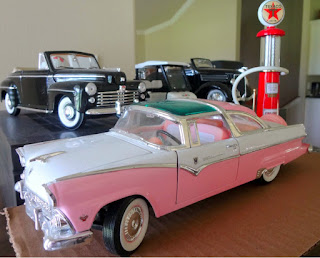 Both these are 1955 Fords, the one on the left was on a NAPA calendar, part of my collection.  It might be red but I think it is a dark pink.  Ford made more pink ones that red in 1955.

The one on the right is my car, a 1:18 scale cast iron model of the 1955 Ford Crestline hardtop.  I bought it way back from the farm store in Tekamah, Nebraska, from their after Christmas sale for half price.

Here are a few more that I appreciated at least enough to take their pictures: 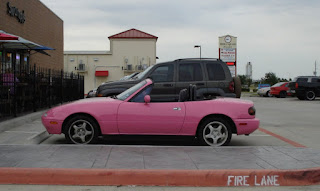 At left a toy plastic car in conjunction with the Big Breakfast celebration at our church, it was a place marker for its owner's lemon bars.  I got the last one.  On the right is a nondescript pink car parked in Friendswood (Texas) at a shopping center.  Kind of pretty. 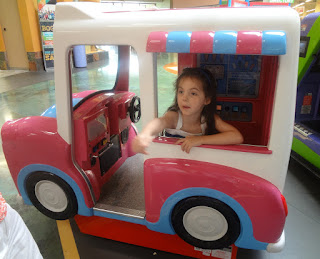 On the right here is a pink toy car for kids to ride in after the parents have loaded it with a few quarters.  It was by the Merry Go Round at the Woodlands (Texas) Shopping Mall.
I am not KP's parent, just a grandparent, and I didn't have quarters for this car.  We may have fed another earlier, I can't remember.  We did feed the Carousal.
KP was about three here, home from London to visit her four grandparents.. 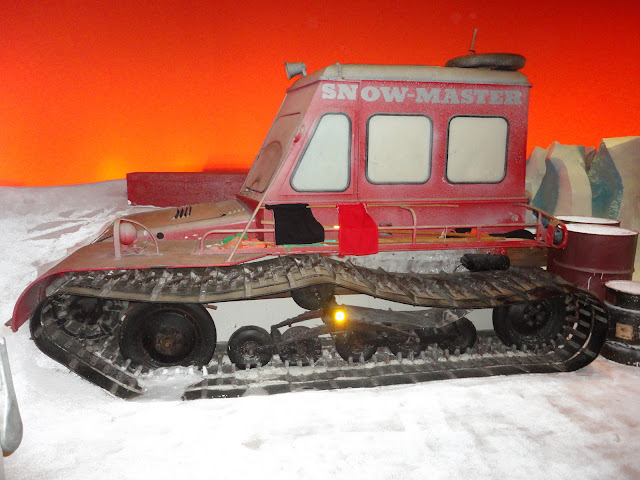 This is a training vehicle belonging to the U.S. Navy at Christchurch, New Zealand.  The Navy has a training facility there for Antarctic Exploration.  One like this one took us for a bumpy ride through the snow at the training field.  We were riding in a trailer-like vehicle being pulled by an Arctic Crawler like this one.  I don't know why it was pink, not a regular Navy color for vehicles. 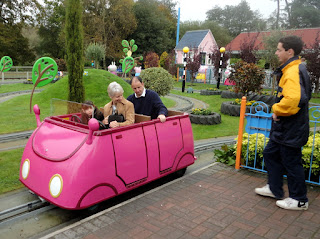 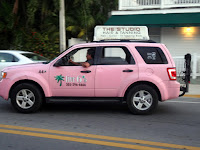 At left is a pink car on track in Peppa Pig Land, Southampton, U.K.  We rode the train down from London.  Our main purpose was to introduce the play-land to KP.  She was three and loved Peppa Pig (Google search).  Mrs. Jim was driving, Billy (KP's Daddy) was her passenger.  Front seat passenger was KP.  The car on the right was a Ukraine find.