My Alphabe-Thursday (5th), the letter "I" — Some places I've been starting with "I"

"I" is for some places, countries and cities starting with the letter "I" where I have traveled: Lets start with the countries.  I liked them all, not really a favorite. So, Ireland gets the nod, we've been there a couple of times.  Both times we had a rental car (drive on the left side of the road).  It is a pretty country, not overpopulated, and they speak English.  Currency is the Euro which has a better U.S. exchange rate than the British Pound. A favorite thing to do is to visit the Blarney Castle outside of Kilarney.  And you have to kiss the Blarney Stone while you are there. Mrs. Jim went up there also but she didn't want to kiss the stone. I've kissed it twice.  To read and see more please check the original 2007 post, found here.
The Isle of Man isn't a country so I can't put it on the list above.  It is a self-governing British 'Crown dependency,' not a country. (Wikipedia link)  It is located off the coast of Britain.  Though there is a ferry that goes there, we flew.  My grandfather's family came from the Isle of Man.  We visited it in 2007 (prior blog posts). The main thing we did in  the Isle of Man was to go from Douglas, the capital city in the middle, where we stayed up to the north by train and then go to the south end via bus.  Lots of site seeing.  We did see evidence of the Corkhill family having been there.  One lady at the information center (above, right) informed us that her maiden name was Corkhill. 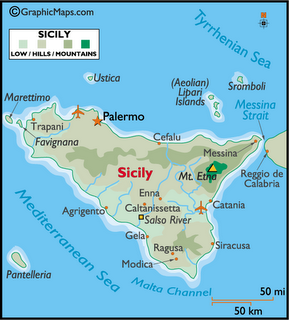 For Italy we took a Grand Circle (travel company) tour of the island of Sicily for two weeks (link).  Since it was by bus, we could explore each part for about a week.

First we stayed at Palermo for a week, then Argrigento (Greek ruins there) one night, and six more nights at Taormina, a small (population 11,000) hillside town on the east coast of Sicily with a nice view of Mt. Etna. We did go onto the slopes of Mt. Etna. After that we flew from Naples over to Milan where we rented a car and toured Provence (France) and Tuscany a week each to finish our five week vacation. 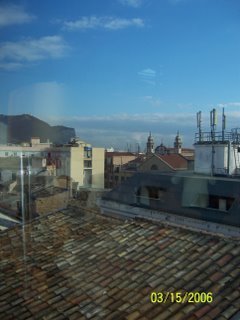 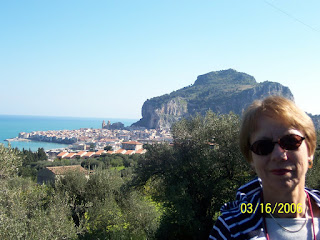 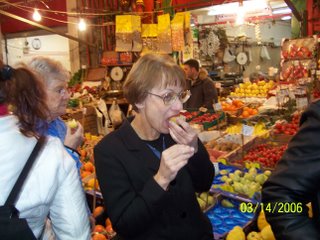 Above, to the left is looking out our  hotel window to the north to the sea.  Next, Mrs. Jim and I took a walk up our hill in Sorento (Amalfi coast) and could look over to the Isle of Capri. 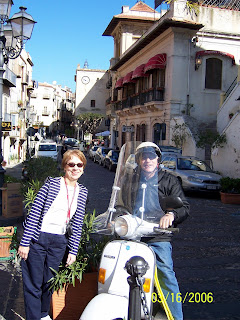 I took a lot of motor scooter pictures when I could.  A lot of women ride them in Italy.   To the right we see Mrs. Jim sampling the goodies at the Market in Palermo, Sicily.

Independence, Missouri, is the home of the Harry S. Truman Presidential Library and Museum (link).  It is a wonderful presidential library.  I have visited slightly more than half of them, seven (7) of the thirteen (13).

The libraries make a nice goal for seeing places in the U.S as surely if you go by car you will not only explore the state of the library you pick, but also the states along the way (List of all 13 links on left sidebar).  We love to make a sweeping tour and try to not come back the same way we went.  We have been to ALL 50 of the states.
- Jenny is starting in now on her tenth series of Alphabe thursday.  With 52 weeks in a year and 26 letters in the alphabet she is now in her fifth year.  I am linked to her blog, GO HERE for more participants and their offerings.