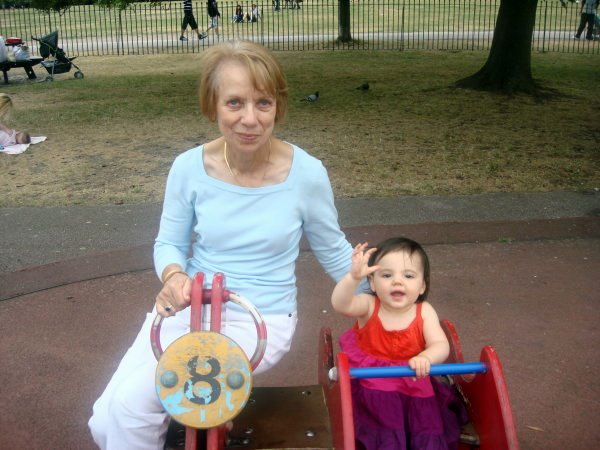 I know, that is hard to take. And hard duty too, not. The Queen is a delight to be with. All KP has to do is know how to play swing, like the London parks, be able to patty-cake, like to go for stroller rides, eat gelato, take short naps, and smile constantly.

There's more good things too but you get the picture. 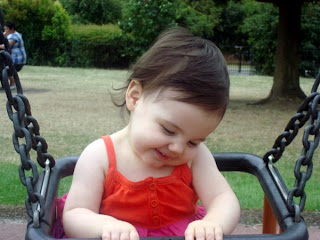 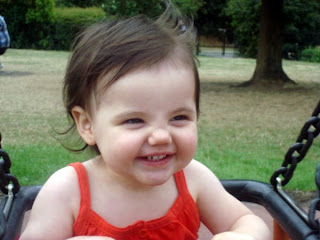 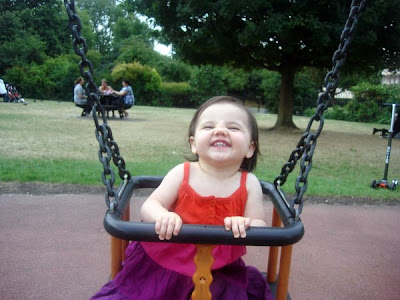 I forgot, she has to a act silly too.

That's my No. 7 Flashback Friday post. Linda is way ahead of me and I'm not sure what number she is on. Sometime I might still do the one for last week on food. That one is perfect for Jim and the Jim Bunch Eats gang (link).

Did your family attend church when you were growing up? What are your earliest memories of church? Did you attend VBS (Vacation Bible School) when you were young? Sunday School? Other church activities? Was faith a Sunday-only thing or did it impact your life and the things you did? If faith and church were not a part of your growing-up years, when and how did you begin and what drew you to God? 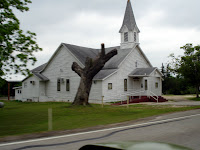 Early life:
I didn't go to church when I was little. The folks or just Mom may have brought me when I was too little to remember. So if that be, I won't count it anyway.

Mom wanted us to attend church. It would be the Baptist church where she grew up in. But Dad wouldn't go. I don't know why, they were married there. He just wouldn't go.

Mom said she didn't want to be one of those ladies who would come just her and the kids. So we all stayed home on Sunday mornings. I don't know what we did, that was before TV and I don't remember listening to the radio. I feel we did not work but rather went for a ride or picnic or something like that.

Dad could get very ornery. Sometimes he was mean to my mom and I was always afraid he would hurt her. I don't think that happened though. That would break her heart and I know she would have left.

So Mom waited patiently and prayed for Dad and for us kids, Lois and me. And for herself, I am sure. 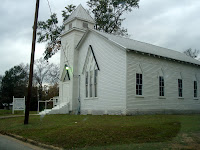 Early Church times:
Then one day it happened. We all went to church. It was the first Baptist Church of Tekamah, Nebraska, Mom's home church. What I remember was going to Mrs. Webster's class. I must have been in about the fifth grade.

I think we went every Sunday after that. Dad stopped being ornery. Later he would become a deacon and teach Sunday school. I am not sure when that started. But we went every Sunday. I wouldn't dare not go or even say I didn't want to go. I felt there was no choice, I HAD TO GO TO CHURCH, the folks made me go.

There weren't any kids there that I knew at first. Mom and Dad knew a lot of the people but since I attended a rural school of between six to eight pupils it worked out none of them attended our church.

One day when I was in high school, about sixteen, my sister 'walked the isle' which meant she would ask to join the church. Baptists have to be Christians before they can join so I am sure they asked her some questions.

That was not right for me as she was five years younger than I was. I should be joining before she did. So I got up and followed her up. I don't remember what all was asked of me, I suppose it was whether or not I was a Christian and did I understand what that was all about. Since I had been in church now for eight years of course I knew what things were about. 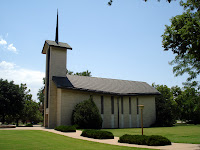 Young adult days:
I graduated from high school that year at age sixteen. My sister will tell me seventeen. I went off to college at the University of Nebraska in Lincoln, Nebraska. That was another last minute decision meaning that I missed the opportunity of getting into the dorms. Not good.

My folks arranged for me to stay with my Mom's cousin Bessy and her mom. I had a small but very nice upstairs room looking out onto the garden and the alley. I discovered there were openings at a boarding co-op at the Baptist Student Center.

They accepted me. I remember my meals, three a day, cost $40 a month. Each week there was a duty for me of setting tables, serving the meal, or washing dishes. We had a hired cook. There were about twenty-four of us eating there. We ate Monday through Saturday noon. Breakfasts were always make your own of cereal, fruit, and pastry.

The first year I ate Sunday dinner with a friend from the co-op after church. Sometime that first year we both quit going to church. I didn't go again until I met my first wife. She was Methodist and after we got married we attended and belonged to Methodist churches near to where we would live.
.
It was at a Methodist church in Manchester, New Hampshire, where the choir director asked me not to be in his choir. He told me about my bad ear. Before that in El Paso, Texas, I was enjoying singing both the choir and in a men's chorus. That clever director put me beside a strong singer that I could follow and didn't say a word about my ear. I did learn to read music though. I later learned to play the piano but I don't sing in public anymore. All this reminds me of Harpo Marx. 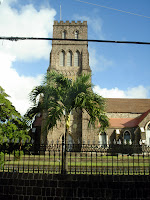 Life lately:
When that marriage was over I quit going to church and did not go again until I met my wife, Mrs. Jim. That was thirty-eight years ago. We have belonged to Baptist churches ever since. Mrs. Jim had been tithing her income (she gave 10% to the church). I told her that I would write her check but that I wasn't going to tithe my money.

There were times that I wondered if I were really a Christian. Would I go to Heaven if I died? I would think about that more than you could know, especially after getting back to church habits.

Then one day thirty years ago during a revival service preached by the Bourbon Street Preacher of New Orleans I felt as Jesus was actually talking to me personally as the preacher read from his Bible. It was from Revelation 3:20. (link)

It had to have been in spirit but anyway this is what Jesus said: "Behold, I stand at the door and knock. If anyone hears My voice and opens the door, I will come in to him and dine with him, and he with Me."

I knew what that meant to me. It meant that if I wanted to be a Christian for sure that I should I should 'open the door to my heart' and let Jesus come in. That meant according to the Baptist belief that I should pray to Him to forgive my sins and tell Him that I would follow and obey His rule in my life. I also believe that is what the Christian Bible tells a person to do. I do not doubt anymore. Now I definitely am a Christian and now I am sure about going to Heaven.

My life changed after that. Not that I was bad before. Rather that I began accept jobs and helping in the church and even started tithing. And I began a praying regularly. My students at the college accepted me as a Christian.

One student caught up with me one day and said to me, "Mr. 'H,' you are a Christian, aren't you?" I said yes, how did he know. He said, "Oh, I just could tell. It was in class when you said you would not go to a certain lawyer movie because it was rated R."

We developed a friendship that lasted until he left our school. As did I with a lot of them. Retired now, in the church I co-teach a couples class of ages 70 and over, have been going on mission trips, and serve on committees. In the community I try to be a good Christian citizen example.

Notes:
1. I am sorry about the times I missed returning to your blogs. I am home now and PROMISE to return all comments you leave here. And visit a little later some that didn't leave comments.
2. Linda wanted us to talk about VBS, Vacation Bible School. I am sure our family church had them but I was too old when I started attending. Besides we lived in the country which would have presented a transportation situation.
3. This got pretty long. I was too wordy but this is what it came out and I don't have time to edit and shorten it.
4. I have not attended any of the churches pictured. They are my driving pictures meaning that when I drove by I liked what I saw and took a picture to save the memory for myself. 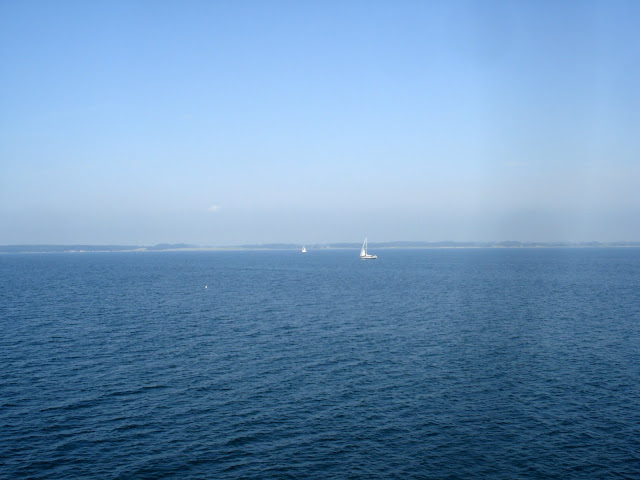 Between these two pictures was a fun day at Oslo, Norway,
and onboard our ship, the Dawn Princess. 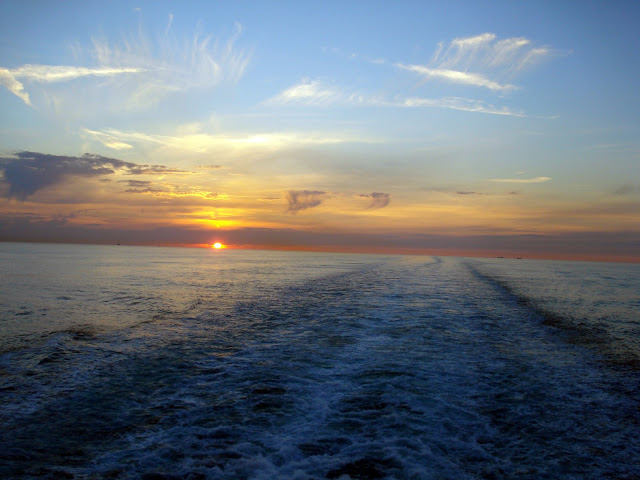 Some of the fun activities at Oslo, Norway, and on board ship that day (link):

Scenes from aboard ship. The sun didn't set until after 10:00 PM. I was offered a second plate of lobster and shrimp. Do you think I took it? Of course I did!

There is a lot more to do in Oslo, we did some more. It is a beautiful city. 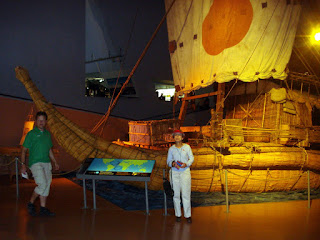 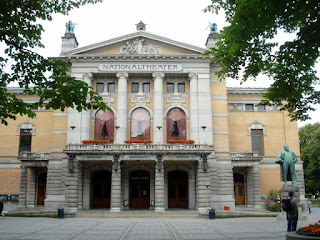 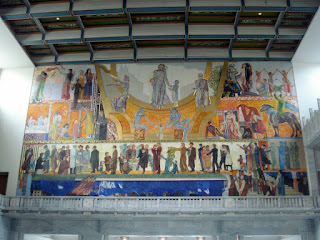 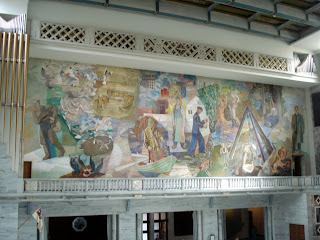 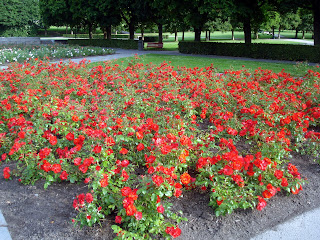 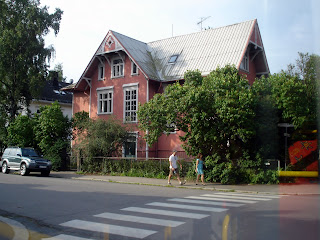 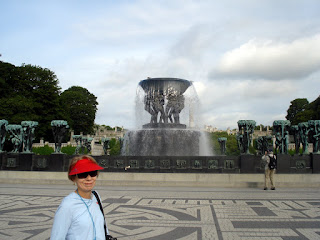 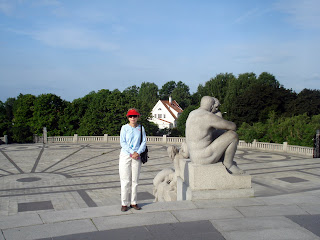 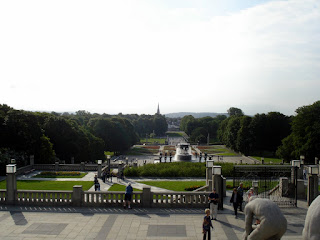 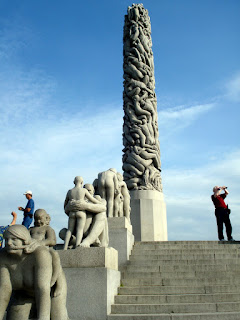 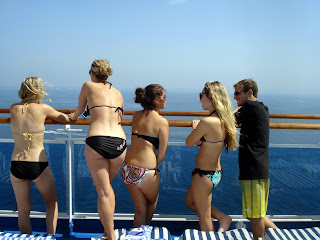 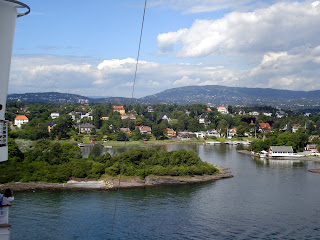 People here were watching the bridge in the picture below. It links Denmark and Sweeden. (link) Our ship is one of the larger ones and there wasn't very much clearance. It gave me a glimpse into the feelings of an 18-wheeler driver going under a low highway bridge. We made it. 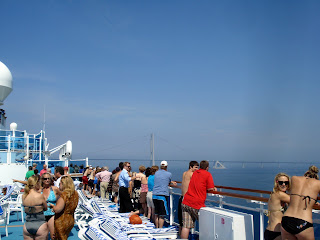 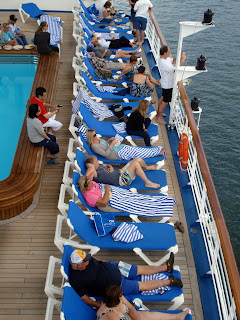 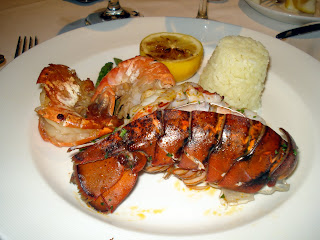 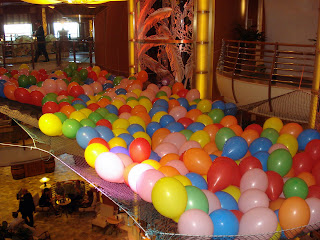 Or do less. All she requires is a BLUE PICTURE or BLUE THOUGHT, you don't have to write.
.