Mrs. Jim is going to have a root canal on May 3. This will be the first for her. She will probably remember this as long as she lives, having a root canal is a big deal.
. You know there is a first time for everything. Good things and bad.

I love to reminisce about those firsts. Some of my fondest memories won't be posted here. Others will.

My first root canal was done by an Army dentist, way back in the 50s.

The root canal hasn't given my any problems but the tooth has. The part he put in fell out many times. Finally dentistry began using a glue that made it stick permanently, so far.

The tooth is also loose at the roots. For several years I have been able to wiggle it. My current dentist would pull it but I won't let him. Wait till it falls out or becomes infected is my order.

It had belonged to my Dad's friend, Elmer Cells. Elmer also had been my high school principal and chemistry teacher. And later on, twenty-five years later, he and Mrs. Cells became Mrs. Jim's and my very good friends.

They visited us several times in Houston. We looked forward to their usual gift of Sue Bee Honey [headquartered in Sioux City, Iowa]. See, Nebraska friends! And they liked it here too! .
Please help take care of God's good green earth.
We are its stewards, He appointed us.

Lets all do a good job

Miss Texas came to sing at our church Sunday! This Sunday we had a special treat, Shilah Phillips, Miss Texas, came to sing for us. She first sang His Eye Is On The Sparrow, then a little later, The Battle Of The Lord. Her singing those, meant as PRAISE TO GOD, was a great treat for me! She sings really good, and she is loud.

Then during the offering Shilah, the Sanctuary Choir, and the Church Orchestra, together did There Will Come A Day with What A Day That Will Be.

I stayed over for the music of the second service and got to hear it all twice. I usually do that so it wasn't too unusual. Mrs. Jim plays viola in the orchestra for both services, they leave before the sermon at the second service.

That's what I do too, but just listen and not play an instrument or sing in the choir.

Shilah began the beauty pageant phase of her life at Frisco, Texas, where she won the Miss Frisco title. She then entered and won the Miss Texas, 2006, contest. She followed that in January, 2007, by becoming the First Runner Up of the Miss U.S.A. contest. Go here to see her in her tiara and here for a short Wikipedia article. **

**
Education
Phillips attended the Denver School of the Arts from seventh grade until graduating from high school in 2000. She studied both vocal music and theatre in her time at DSA.
Phillips began studying jazz music at Howard University in Washington, D.C. and, while there received the Most Outstanding Vocalist award.[citation needed] She was recently accepted into the renowned jazz studies program at the University of North Texas.

Notable achievements
Phillips won the 2006 Miss Frisco title on 30 October 2005.[1]
Phillips is the first African-American to hold the Miss Texas title when on 8 July 2006, at age 24 years, she won the pageant on her first attempt. She is only the second woman in the history of the program to win the title on her first try. She competed as Miss Frisco, sponsored by the Miss Plano Frisco Scholarship Organization.

. . . old men and children. Let them praise the name of the LORD 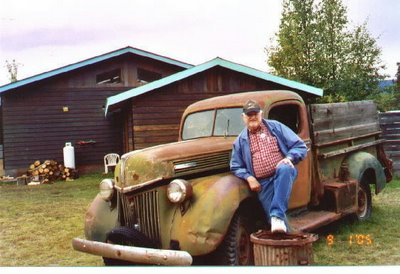 11 kings of the earth and all nations,
you princes and all rulers on earth,

13 Let them praise the name of the LORD,
for his name alone is exalted;
his splendor is above the earth and the heavens.

This came in my e-mail,
[not the old truck picture though]

Senior citizens are constantly being criticized for every conceivable deficiency of the modern world, real or imaginary. We know we take responsibility for all we have done and do not blame others.

HOWEVER, upon reflection, we would like to point out that it was NOT the senior citizens who took:

The melody out of music,

The pride out of appearance,

The courtesy out of driving,

The romance out of love,

The commitment out of marriage,

The responsibility out of parenthood,

The togetherness out of the family,

The learning out of education,

The service out of patriotism,

The Golden Rule from rulers,

The nativity scene out of cities,

The civility out of behavior,

The refinement out of language,

The dedication out of employment,

The prudence out of spending,

The ambition out of achievement,

God out of government and school.

And we certainly are NOT the ones who eliminated patience and tolerance from personal relationships and interactions with others!!

And, we do understand the meaning of patriotism, and remember those who have fought and died for our country.

Does anyone under the age of 50 know the lyrics to the Star Spangled Banner?

What about the last verse of My Country 'tis of Thee? "Our father's God to thee, Author of liberty, To Thee we sing. Long may our land be bright, With freedom's Holy light. Protect us by Thy might, Great God our King."

Just look at the Seniors with tears in their eyes and pride in their hearts as they stand at attention with their hand over their hearts!

I'm very good at opening childproof caps.... with a hammer.

I'm usually interested in going home before I get to where I am going.

I'm awake many hours before my body allows me to get up.

I'm smiling all the time because I can't hear a thing you're saying.

I'm aware that other people's grandchildren are not nearly as cute as mine.

I'm sure everything I can't find is in a safe secure place, somewhere.

I'm beginning to realize that aging is not for wimps.

I'm sure they are making adults much younger these days, and when did they let kids become policemen?

I'm wondering if you're only as old as you feel, how could I be alive at 150?

And, how can my kids be older than I feel sometimes?

I'm a walking storeroom of facts..... I've just lost the key to the storeroom door.

Yes, I'm a SENIOR CITIZEN and I think I am having the time of my life!

Now if I could only remember who sent this to me, I wouldn't send it back to them, but I would send it to many more!

Have a great weekend!