...
My London things in pictures are at the bottom of today's posting.

First, the Flashback Friday:
What are your memories of the fads you had in while you were growing up? How much did you get to follow them?

That was the big question Linda poised for us this week (to see others or if you want to join in with fun of writing up your experiences, please click on the icon to the right).
My answers are hard to fit these questions, but here goes:

What fads were popular when you were growing up? Which were seen as "must-haves" and which as simply silly fads? Did you like them or hate them? Which ones did you have? Which ones did you long for but never get to have? Were your parents pretty tolerant of fads or did they resist them? Were they the type to be sure you had whatever "the" Christmas gift of the year was? What about fad speech? Were there particular phrases or words that were common to your generation? Have any of these fads made a reappearance in your adulthood?

The reason this meme will be hard for me is because I didn't know of any fads going on. We didn't have TV so I couldn't see what those Jones's were doing. Neither did anyone else in our school, at least not very many.

Remember too that there were never more than 6 or 7 in school with me. And our school taught all eight grades by one teacher. None of us had the latest. My cousin did have a record player but then I wasn't into listening to music so it didn't bother me to be without one. In fact I didn't even want one. No special items for Christmas lists either. I might have been a stick-in-the-mud kid.

When I got to high school things were a little bit different. The first two years were at another country school. One popular thing-to-do there was to ride your horse to school. So I did that. Minnie was Dad's riding horse but he let me take her to school with me.

At first there was not stall in the school barn for her so she stayed all day tied to a tree down near the barn. Before winter though, one of the kids moved away and I was next on the list to use the barn for Minnie. I think she liked that a lot. Minnie got a new lease on life with me riding her. The exercise of walking the three miles each way was good for her. I also taught her how to jump over ditches and low objects.

Blue jeans were new back then and I got to wear them instead of the bib overalls I always wore to school in the first eight grades. Town high school for my last two years was a little different in that I drove Dad's pickup truck. I might have wanted to put a red or yellow plastic hood ornament on it as some of the kids had them. But I didn't ask and for sure Dad never got one for his truck.

I do remember getting a bright necktie for graduaton. It was orange red and seemed as if it would glow in the dark. I wore at college as it was the in thing. So were cordoroy cream colored pants (the University of Nebraska colors are cream and red) and for sure I had a pair of those.

My kids didn't have a lot of the 'in' things either. In high school they had jobs at an Baskins Robins Ice Cream store and did spend some of their own money for a few of the fads. I feel, but can't remember for sure, that they had items like Nike brand shoes.

This is except for our youngest, Karen. We would drive to New Orleans to the Espirit outlet store in order for her to have those favorites. It helped that we had relatives there then so we could combine a visit with the trip. Still there was a lot she didn't get either.

That's about all I can't remember about fads.

I thought you might like to see a couple more of my London pictures: (click on them to for bigger size. Click again for extra large size. Use the back button to get back to the blog.) 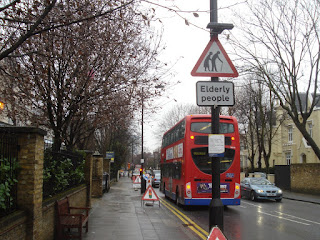 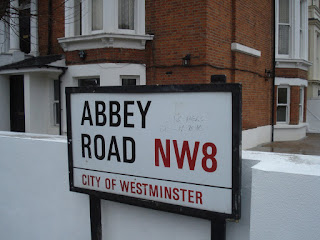 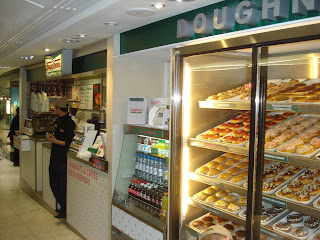 The picture on the left is a double goodie for me. First I love these double-decker red buses. They aren't the kind with sight seeing announcements and you hop on and hop off wherever you want. They are running regular routes with a high carrying capacity.

That picture also has an elderly people sign. I would like one of those in front of our house as the cars go pretty fast. Way to fast for the comfort of dog (Adi and Katrin) owners like me . Those signs were quite common in Ireland, Scotland, and Isle of Man but this was the first I have spotted in Great Britain.

Next is the Abbey Road street sign. This one is near the recording studio where the Beatles made their first records. Most every day there will be droves of tourists taking pictures of the studio and of each other crossing the street like the Beatles did for one of their famous albums.

Finally we have a Krispy Creme donut store. Those are closing around the States but they seem to be going strong here. This one is underground at the Canary Wharf underground shopping mall. I have seen several others but didn't take a picture of any before this one.

For more pictures of what we have been doing in London please click here. Just a lot of our pictures include things we did with the Grandkids. Or scroll down looking as your scroll. 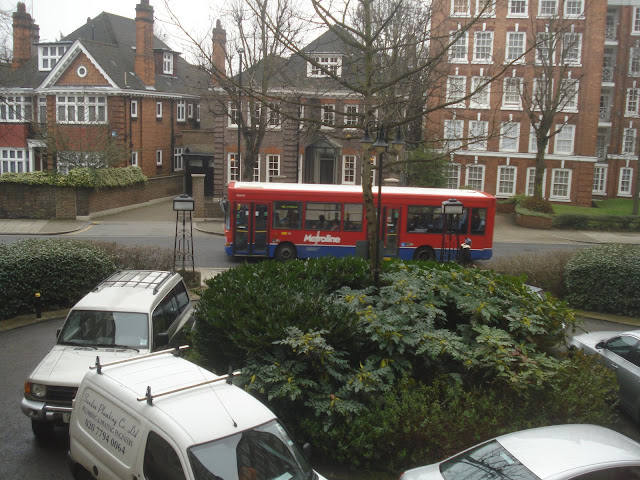 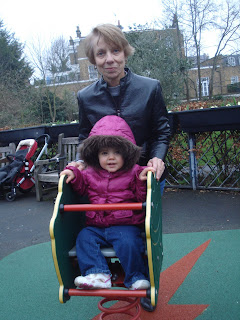 This is the London view we see in the morning from Karen and Billy's living room window . We are enjoying our visit with them but soon it will end. Our salt mines are calling.

The bus is the one we caught to go down to Gymboree a couple of posts ago. Most places we go to are within walking distance. The ones you see here today all are.

The first is a little neighborhood playground that KP loves. She probably likes the swings the best but she also likes to climb up on the slide and then slide down. Here she is sitting in an animal seat.

Sunday we walked over to St. Marks Church on Hampton Road in St. Johns Wood. Before we got to the church there was a breakfast stop at Raoul's, a local cafe. 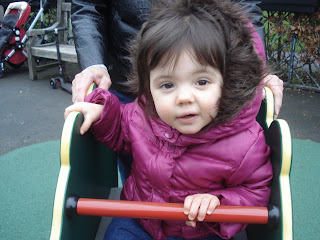 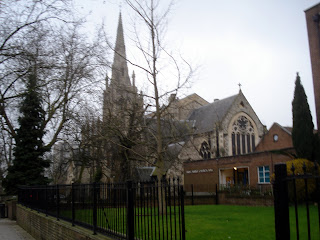 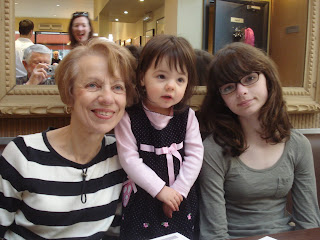 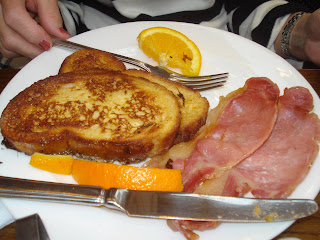 The walking "we" were Mrs. Jim, KP, and BP. Karen and I were there as well but we were taking pictures as you can see in the mirror.

This was Mrs. Jim's breakfast, French toast with English bacon. She had her usual coffee and then an orange slice was thrown in for good measure. I had the corn beef hash with an egg and toast with water to drink. The others all had either French toast by itself, no bacon.

Oh yes, before we could leave KP had to take care of a phone call. She loves to push buttons and play phone. This one of Karen's is real. 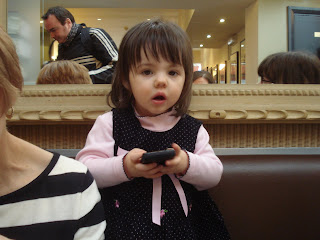 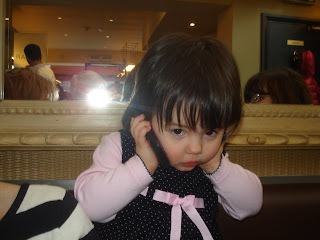 I do think that the bacon and toast breakfast picture here sneaked in somehow.

Four things to do in London things 01 -- Ruby (Red) Tuesday 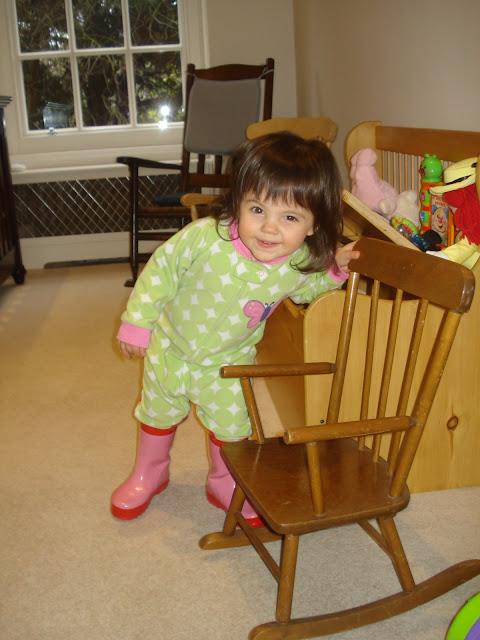 You can see right away that these four things involve KP, our youngest grandchild.

Official KP qualifies as a toddler as she is now 19 months old. Yes, she toddles really well but I dare say she is also going to be a runner like her mom, Karen.

We were pleasantly surprised at how much more mobile she has become since we saw her a Christmas time. 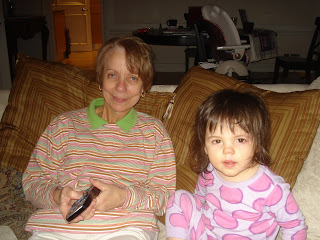 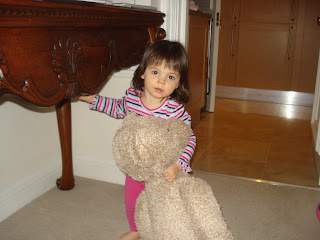 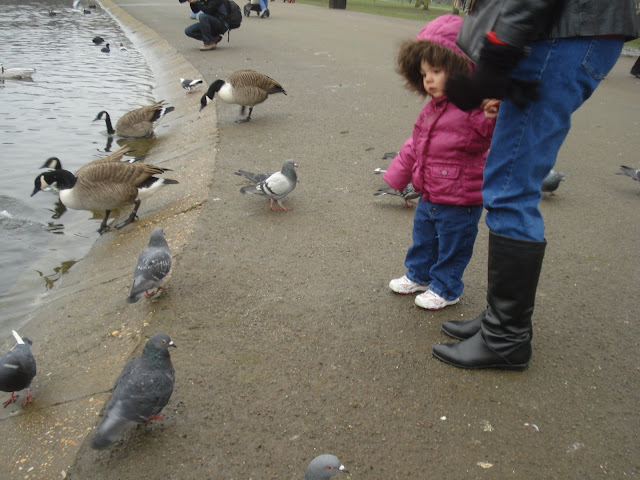 Do you think little perhaps that little birds like little people
while the larger birds just want to be 'out of here?'