How to go to college without paying a dime...

If you ever thought about going to a college and for whatever reason couldn't attend, I am offering a solution that will work. I can not say how long it will work but it appears the time frame will be about 1 year.

In an article in the Houston Press, David Vanegas attended Rice Univeristy for a year. He was a transfer student from the Univerist of Texas. However, last month, Rice police arrested Vanegas for criminal trespass. Turns out he wasn't an actual Rice student but a 20-year-old impersonator. Starting last September, Vanegas began eating in Rice's dining halls, hanging out with students and attending classes. He even slept in the dorms of some of his " fellow freshman". Campus administrators alleged that Vanegas had taken close to $3,700 worth of food from Rice cafeterias. The district attorney's office filed felony charges for aggregate theft. Bail was set at $2,000.
One quote from the story:
Sophomore Chuck Swanson says he recognizes the genius in Vanegas's plan: "Let's say, for whatever reason, you can't get into Rice. Do you a) go into the workforce, or do you b) decide to crash a college for a year? You get to go to parties, you get free food, you get to hang out with people that are your age and have fun. Pretty much, he did nothing. He's being a bum -- but in an awesome way at a great university."

Now I just wonder how that "degree" looks on his resume.

101 most influential people who never lived

I am a sucker for lists. It seems every time I read something, there is a list. They can be about of what song was the best in 1985 or the 10 best sports teams who start with the letter C. Anytime you read a list and mention it to someone the other person always has a different opinion.
I was pleasantly surprised when I cam upon this list. Someone took the time to rank the top 101 most influential people who never actually lived. I copied the top 10 below.However, I found a huge mistake. Number 4 is around and still stops by my house most years. When he skips my house, Karen says it is something I did. Sadly that's probably true. So with further delay, the top 10 +:

From The 101 Most Influential People Who Never Lived by Allan Lazar, Dan Karlan and Jeremy Salter

P.S. I think Santa Claus and Superman should be 1 and 2.

Since Jim is away, I am trying to uphold his high standards of blogging. I thought I would try this one:
Adi Can....bring her luggage for a visit. 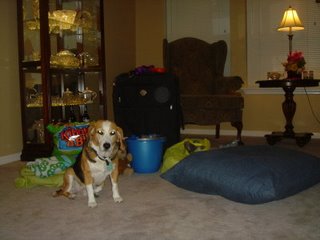 Adi packs a big bag for her visit. As you can tell, I think she may be a bit spoiled. I am wondering if Jim packs this much stuff for his incarceration(s).
Adi Can....share her pillow. 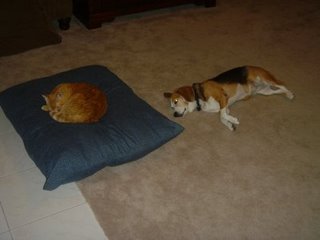 Adi seems to have no problem being around Amber. Sometimes they even cuddle when no one is looking. 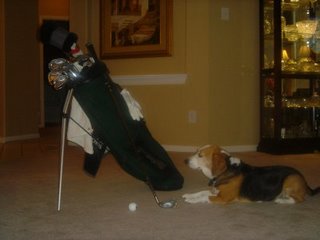 Adi seems to be impressed withe them but she is not sure how much they will actually help my score. After all the rain stops, I will have to try them out.