Yikes, it's the Ides of March! Trouble is brewing right here in Bentwater City**** 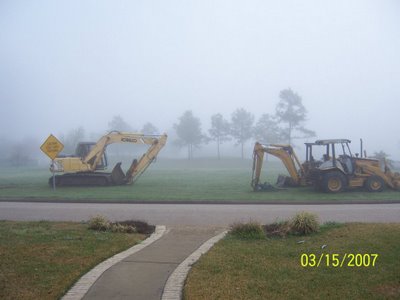 It was a dark and foggy morning. Evil was foreboding. What could be happening to our little world?

Let's start over here. This is the view out our front porch this morning. Those three big machines blocking our pretty view were harbingers** of troubles to come. To say the least inconveniences, noise, visual pollution, and traffic problems out front.

Widipedia has a nice little short article on the Ides of March (link). Although we fear the 15th of March, there were also Ides in every month. Some are on the 13th, four are on the 15th:

Here is a picture taken last year of the pretty field of yellow flowers that will giving way to these yellow behemoths. 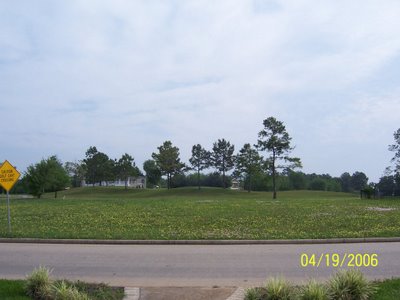 There's another problem today. Our Houston CBS story took off The Price is Right program (link) . Oprah is alright once in a while but really isn't for me. Could this be a one time thing until March Madness is over?

Thank goodness we don't have cable. I can still get Bob Barker doing his thing on the College Station CBS Channel 3.

Can you imagine her not picking up the income taxes due for those Pontiacs she gave away? I haven't forgiven her for that. Too, I haven't heard, but maybe the public outcry did cause her to pay up on the taxes. She can afford that too.
...
.
.
Notes:
** Harbingers are fictional characters with superhuman powers who appeared in every Valiant Comics title. [from Widipedia article--link here]
*** Quoted from Ides of March Wikipedia article--link here to read the article]
**** Bentwater is the name of our quiet subdivision located outside Montgomery, Texas (link). Mrs. Jim and I might be the poorest people in the subdivision as we both worked in public education. But we can rub elbows with the millionaires and ex CEOs on the links or wherever.
Like they I say, "You have a hard time telling who is wealthy when people are naked, or wearing blue jeans for that matter. My jeans come from Walmart or Academy, their come from Tiffany's." I know, Tiffany's doesn't sell jeans, yet. ]

.
On the bright side, after a year or so when this madness is all finished we should be able to look out at a nice big and pretty house. This little flower field is a double lot.

Better yet, even though we haven't met the new owners yet, I'm betting they will be nice neighbors.

For Thursday Thirteen (Raggedy for instance) today I could probably find thirteen good things if I really wanted to be positive. For that matter thirteen bad things for sure if I dwelled on this situation, all temporary though.

Maroon one more time, for the Texas Aggies in the March Madness. My great neice is one of those cute drill team girls sitting in front on the floor too! On CBS today at 2:30 CDT! Goodness, I can watch them on Channel 3 or Channel 11!

This and That -- Times four again: Start with "The Prodigal Returns"

The Prodigal Returns!
[click on pictures for full screen]. 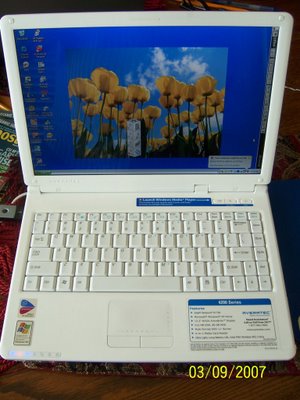 This prodigal is our newest computer. It is a little humdinger but it had to go away. You see the battery gave out when it was only five months old.

So off it went on Averatec Warranty service. Not only did it get a new battery but they also replaced a part--I know not what it was--so the fan would operate correctly. It might have stopped or at least it got very quiet.

Now it is back and runs without any fuss. The tech forgot to tell us not send the pretty box back. Do you think those Irving, Texas, repair people returned our pretty box? No. I sure wish we had it back. Boo to Telespan Services, Inc.

We got it for Mrs. Jim because it is smaller with a 13.3 inch screen. It fits better than a larger one in the antique vanity she keeps it in. Nice too is it's nice clean white color.

Specifications: Averatec 4265 with a Pentium M 730 processor; Windows XP Home; 512 MB RAM; 80 GB hard drive; DVD +/- Burner; 4-in-1 Media Reader; and built in WIFI for Internet. In otherwords it has all the bells and whistles Mrs. Jim needs. 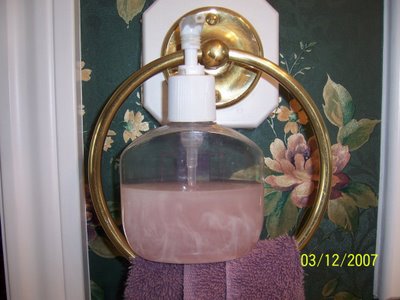 I thought it might be a colloidal suspension but that turned out not very accurate. Those little squigglies, they aren't colloids?

It looks very gross doesn't it? To think I put that on my hands quite regularly and sometimes elsewheres on my bod.

Actually it started out with some Island Sense Luxury Body Soap--white in color--and then mixed with Suave Passion Flower & Rosemary Body Wash. I shook it fairly well, it just didn't mix good.

That Frank Sinatra "was buried with a bottle of Jack Daniel's whiskey, a pack of Camels, a Zippo lighter, and 10 dimes?

"Daughter Tina Sinatra said carrying the dimes dated back to the 1963 kidnapping of her brother, when her father wanted to make sure he always had pay phone change.

""I think it came from Frankie's kidnapping, maybe before,'' she said on CNN's Larry King Live. "He never wanted to get caught not able to make a phone call. He always carried 10 dimes.''

"She placed the dimes in his pocket. Her sister, Nancy, put the bottle of whiskey in Sinatra's pocket and someone else slipped in the cigarettes and lighter." [source: Frank Facts (link)][There's more there too.]

BTW, I heard the question on the Millionaire program tonight and got the answer before the contestant guessed it for $50,000. I should be a life-line. Any takers? 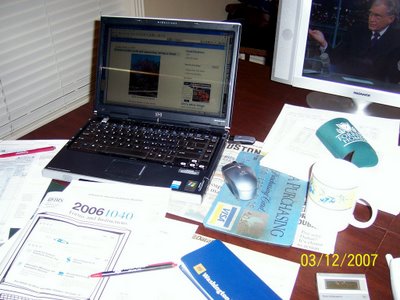 Yes, it's tax time again. Jim does his Dad's every year. Dad has Federal, Nebraska state and Iowa state. Sister Lois dropped it off Thursday while we were at the funeral.
.
Did you see this computer? It is my HP with the same processor as Mrs. Jim's Averatec but is only about half as fast. I have the Spies weeded out and the Ad people on hold. It runs anti-virus every evening at 8:00 and I do an occasional defrag.
.
Finally,
(makes five, dosesn't it?)
. 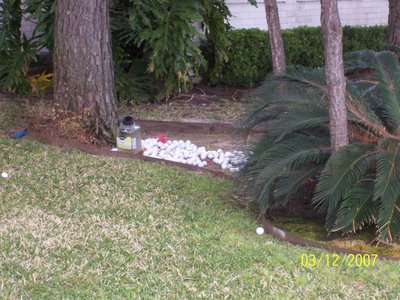 Adi and I found this on our walk to the mailbox. We took the long way, starting left away from the mailbox to end of the block/street and went on down to the 16th fairway. Then we walked the length to the street that would lead to the mailbox. Kind a' like going around the block, it was a rather large one.

These people are growing a golf ball flower bed. Their property is halfway up the par four fairway. My drive wouldn't make it to their back yard but evidently a lot do.

I say 'growing' because it does grow a little everyday when they pick up those out of bounds golf balls and put them in the flower bed. I would like to think that every now and then they might give some away. That's the way I get my balls, the only ones I have bought were for Mrs. Jim.

My son, Mike, will only play a ball nine holes. Then he plays a new one. Our Thermos chest full of balls, he gave me them five years ago, is finally empty.

Flowers of the earth are appearing, spring is here! 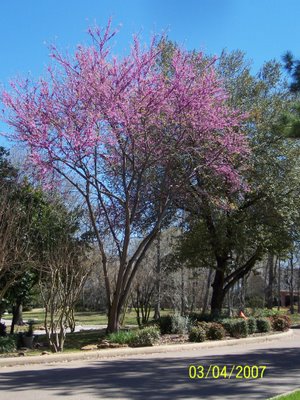 Click on pictures for large size
.
Flowers appear on the earth;
the season of singing has come,
the cooing of doves
is heard in our land.
.
Song of Solomon 2:12
(New International Version-link)
.
.
This is a redbud tree. We have a lot of them here in East Texas, I don't recall them being in West Texas, New Hampshire, or Nebraska.
Those are the other places where I have lived.
. 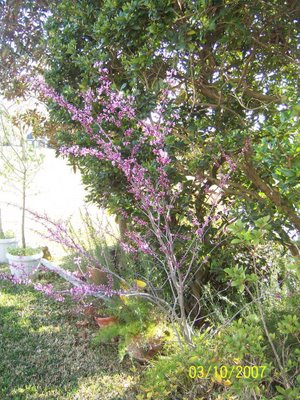 .
We have a small redbud tree in our backyard.
. 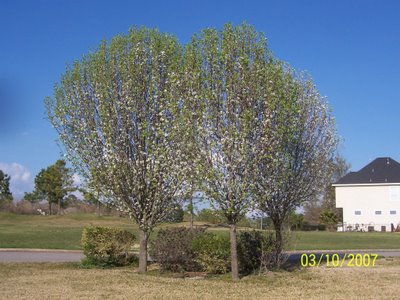 The ornamental pear trees in the front yard are blooming too! I was a little late in getting their picture. Then too, they tried to bloom once before (link) and a frost set them back. 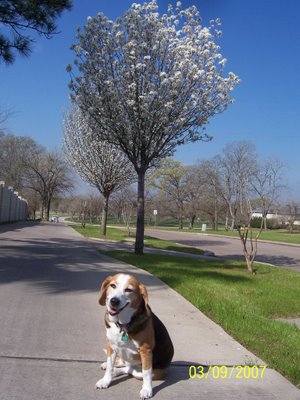 Adi likes this one better. First, it is more her size. Secondly, it has more blooms. Maybe the frost didn't get to it earlier.