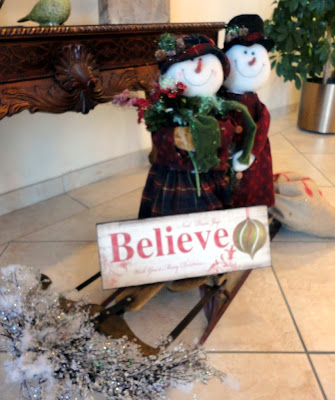 
1 In those days a decree went out from Caesar Augustus that the whole empire should be registered. 2 This first registration took place while Quirinius was governing Syria. 3 So everyone went to be registered, each to his own town.

4 And Joseph also went up from the town of Nazareth in Galilee, to Judea, to the city of David, which is called Bethlehem, because he was of the house and family line of David, 5 to be registered along with Mary, who was engaged to him and was pregnant. 6 While they were there, the time came for her to give birth. 7 Then she gave birth to her firstborn Son, and she wrapped Him snugly in cloth and laid Him in a feeding trough—because there was no room for them at the lodging place.

The Shepherds and the Angels

8 In the same region, shepherds were staying out in the fields and keeping watch at night over their flock. 9 Then an angel of the Lord stood before them, and the glory of the Lord shone around them, and they were terrified. 10 But the angel said to them, “Don’t be afraid, for look, I proclaim to you good news of great joy that will be for all the people: 11 Today a Savior, who is Messiah the Lord, was born for you in the city of David. 12 This will be the sign for you: You will find a baby wrapped snugly in cloth and lying in a feeding trough.”

13 Suddenly there was a multitude of the heavenly host with the angel, praising God and saying:


14 Glory to God in the highest heaven,
and peace on earth to people He favors!


15 When the angels had left them and returned to heaven, the shepherds said to one another, “Let’s go straight to Bethlehem and see what has happened, which the Lord has made known to us.”

16 They hurried off and found both Mary and Joseph, and the baby who was lying in the feeding trough. 17 After seeing them, they reported the message they were told about this child, 18 and all who heard it were amazed at what the shepherds said to them. 19 But Mary was treasuring up all these things in her heart and meditating on them. 20 The shepherds returned, glorifying and praising God for all they had seen and heard, just as they had been told.


- - - - - -
Merry Christmas!!!  Christians around the world celebrate the birth of Jesus the Christ at this Christmas season, the most on today, December 25. Others also celebrate on this day in a similar manner without the worship of Jesus.
Our United States was founded in order for the "undertaken for the Glory of God, and Advancement of the Christian Faith" (Mayflower Compact, 1620) so it is fitting to celebrate the birth of Jesus as a national holiday.
Incidentally, we also celebrate the founding of our nation as a Christian nation, thanking God for protection through the years as did these Pilgrims  who in 1620 instigated the celebration as iterated in the Mayflower compact (made a part of our law by act of Congress on June 30, 1909).

I found the searching sign scene shown in the top picture was in the lobby of our bank.  The others show activities in this Christmas season (click on any of them for a larger view of that picture clicked): 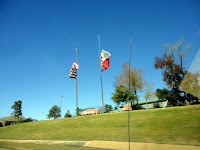 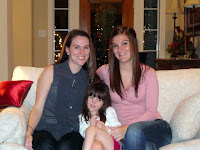 On the left shows one of the many flags flying half mast in honor of those who lost their lives in the recent senseless school shooting massacre in Connecticut.  The Texas flag is the one on the right.

Centered is a three-generation shot of Mrs. Jim, daughter Karen, and her daughter (our granddaughter) KP.  Next at right are our three granddaughters, Megan, Jenna, and KP, at our family gathering on the Sunday before Christmas this year. 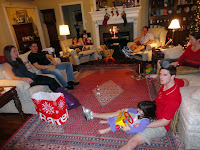 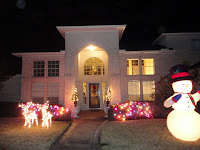 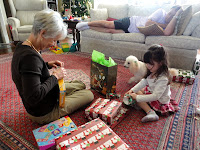 Above left you see the tired kids and grandkids hanging out but really waiting to go home after our gathering with Christmas dinner and white elephant gift exchange.  This is how our house looked with the lights and decoration.  We were told that the grandkids must be coming because the lawn is decorated.  Then what happens the next morning?  Gift opening!

Please note:  I very likely will not be able to return your comment made on this posting.  I do appreciate the visit and your nice comment so I'm saying "I am sorry" in advance.