Give a penny for your thoughts? 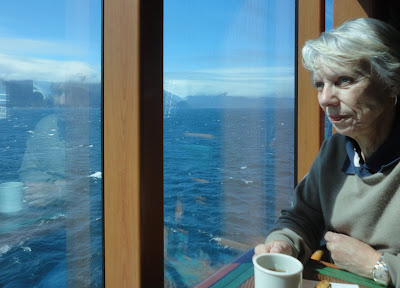 Today will be pictures of the first and last New Zealand places we visited.  The ones below are of Auckland in the north (actually in Devonport, across the bay) while this one above is of Mrs. Jim having coffee with scones as she was watching the fiords at the Southern tip of New Zealand.

There will be more New Zealand pictures later to fill in the one in between these.  Don't know when for sure. 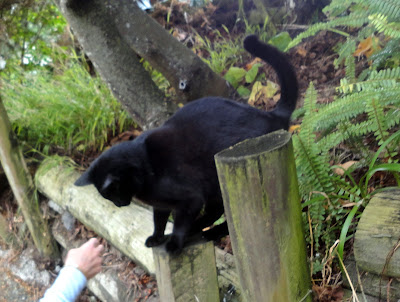 Well, she is 'official' in my book. 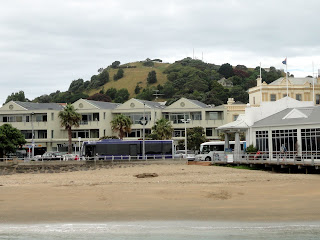 This black cat was the last being that we spoke to on our way coming down from our climb up Mt. Victoria in Devonport, New Zealand.

She came down from by her house to meet us while we were walking through the neighborhood coming down the final descent of the 'mountain.'

We were using a narrow sidewalk which was dividing the small wooden houses on our right and a little garden park on the left.

Next we would catch the ferry back to Auckland, walk over to our Princess cruise ship, and board. 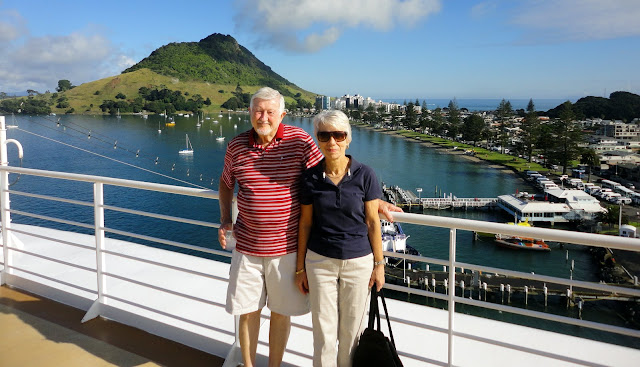 Then the cruise went over to Australia, stopping at Tasmania, Melbourne, and Sidney.  After the cruise we would spend three and a half days and three nights in Sidney before returning home.  On January 1 we spent Mrs. Jim's birthday in Wellington, NZ.

==> For more Feline Friday Cats, peek in on Sandee's blog at Comedy Plus.
.;

==> Describe your life (or something) in a phrase using just six words for Six Word Saturday. Click the box at right to visit Cate's blog with Mr. Linky showing all the other blogs participating this week. Cate is the boss at Six Word Saturday. She would like for you to participate.

— My Alphabe-Thursday (2nd), the letter "I" / Thursday Two Questions —

New Zealand and Australia; our most recent cruise pictures
Here we have some pictures to honor Alphabe-Thursday letter "I" 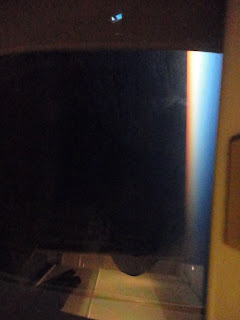 "I" is for Invisible. My first picture is of our flight, crossing the International Date Line.  That is an "I" word group in itself isn't it?

About our most recent Princess line cruise?  It began in Auckland, NZ, and ended in  Sidney, Australia.  Going over we lost a whole day, very suddenly when we crossed the International Date line.  We did get two Monday's of this week coming back.

I wanted so badly to get a picture but didn't get a chance.  Coming back I asked our flight attendant when the time would be.  She said it would be exactly (now come on, United Airlines, is anything exact with you?) at 6:28 PM, Australian time.  That was on January 14 meaning that all of a sudden it would be 6:28 PM, January 13, Australian time.

Sure enough, it was and here above is my picture (with reflections) to prove it. It was shot from the rear window of our United Airlines "Jumbo Liner." Oh yes, it was dark then too, out over the Pacific somewhere about over American Samoa.  (International Date Line link).

Well, you say, if that picture is of something intangible, Invisible, do I have anything we can see.  The pictures below are just a sampling of our cruise from Auckland, New Zealand, through Christchurch.  More will be later, just follow my label, Aus-NZ. 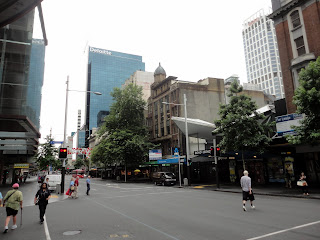 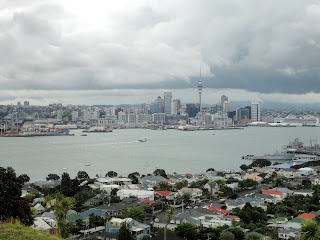 Our United Airlines/Air New Zealand flights took us to Auckland very early in the morning.  We were to stay at a hotel which Princess had rented a large hospitality room with coffee, tea, and snacks until the ship would be boarding in the afternoon.

Mrs. Jim and I took the ferry across to Devonport where we enjoyed this island neighboring city.  The picture shows a part of Auckland taken from Mount Victoria which we climbed at Devonport.  New Zealand's population is about 4.5 million and 3.5 million of those  people live in Auckland (link 1)(link 2). 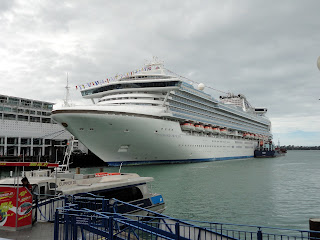 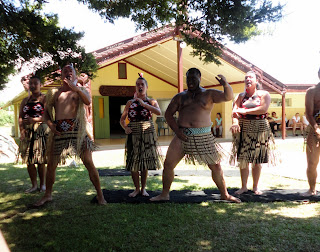 Our ship, the Diamond Princess was ready for our boarding when we returned.  Our first stop the next morning was where we could visit a group of the Indigenous People, the Māori's, who gave us a demonstration of one of their tribal greetings offered to visiting persons.  A part of that was rubbing noses with their welcoming dignitaries, which Mrs. Jim and I did. 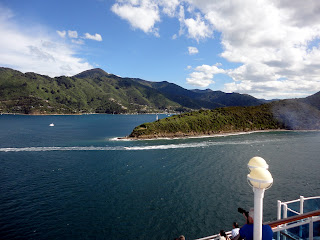 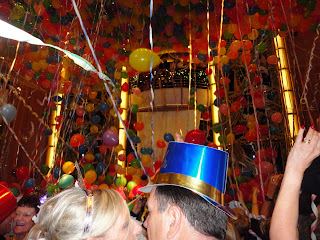 Our next day's stop was at Picton, which was the place I was for my last post of 6WS.  That evening we had a nice New Year's Eve celebration, the highlight of which was a large balloon drop from the third floor of our atrium. 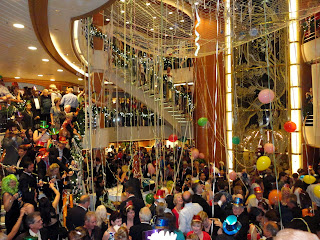 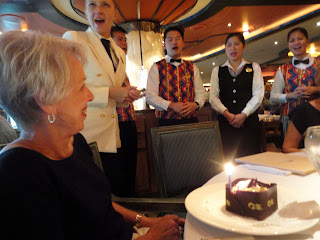 Mrs. Jim's birthday was New Year's Day, which we began celebrations along with the revelers at midnight. The following evening Princess had a nice birthday cake and a singing greeting performed by our wait staff for her. The cake had some really nice chocolate. She shared it with me but the others at our table declined her kind offers. 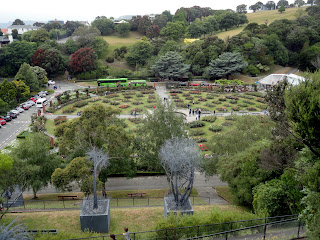 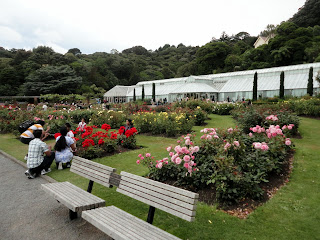 The following day we were at Wellington for a nice museum visit followed by a funicular tram ride up the mountain overlooking the city.  We then made our decent through the city's beautiful Wellington Botanic Garden.

The above pictures are of the rose garden, the first was taken from the fern garden, high above.  The second was of one quadrant full of nice rose plants.  We didn't take time to see how the garden was organized.  We on took just a little time to smell some of the roses and have a potty stop. 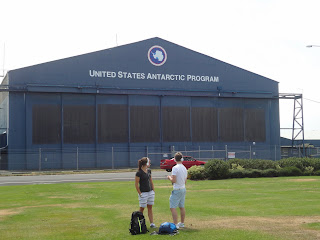 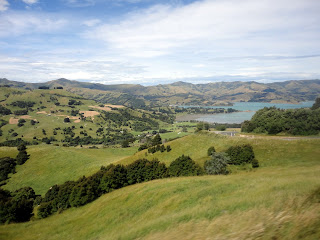 Last for this post are a couple of pictures we took on our Christchurch visit.  Christchurch has a long way to go before recovering from its terrible earthquake a couple of years ago.  The one on the left shows some of the pretty farm land we saw on our one and a half hour bus ride to and from Christchurch.

I will be posting quite a few more pictures of our visit.   To me, New Zealand has beautiful scenery and very green hills and trees to see.  Australia is a more fun town to visit and play. In Tasmania we were allowed to play with the animals like kangaroos and qualla.

==> The Alphabe- Thursday portion of this post will be critiqued by Head Mistress Jenny.

My last post in December was about the of "E" word, Elephant.  I enjoyed reading about your kind feelings towards these lovely beasts.


My Two Questions for this week (you can answer just one if you wish):
.
1. What have you encountered in your life that was invisible?

Bonus Question: What is your favorite "I" word?
. .
==> My Thursday Two Questions post is for Amanda.