My Alphabe-Thursday (5th), the letter "E" — Some places I've been starting with "E"

"E" is for some places, countries and cities starting with the letter "E" where I have traveled:
Countries:
Egypt
Estonia
States:
(There aren't any states starting with "E")
Cities
Edinburgh (Scotland)
El Paso (Texas)
Exeter (New Hampshire)

Exeter, New Hampshire, is a place hardly anyone goes to.  Instead they go through and on to Rye, Northampton, and Hampton for the beaches.  But when I lived in Manchester it was well worth the trip driving the 30 miles east to Exeter for fried clams (Link to Petey's).  I like the clam rolls. If I ever run away for more than a weekend you can look for me up there.

El Paso, Texas, is a nice West Texas town (or it was when I was there five years while in the Army stationed at Fort Bliss).  We used to say it was a nice beach without any water.  What I liked was to ride my Vespa motor scooter all around town and over into Mexico.  I also drove it to work about 20 miles east to work in the desert.

The Vespa loved the trip down U.S. Hwy 80 over to Hueco Tanks (link) which was free and wasn't crowded back then.  Another favorite ride was down in the Valley amongst the cotton fields.  Along the river in Mexico was just as pleasant. 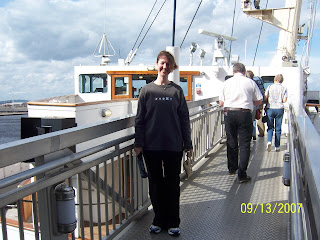 Edinburgh, Scotland, I didn't ever live there but we did have a very nice long day playing there with Mrs. Jim and Karen.  The first thing we did was to visit the Queen's Yacht, now retired.  The Royal Yacht Britannia was home to Her Majesty The Queen and the Royal Family and is now berthed in Edinburgh (link).   I have a few pictures on my blog post (link).  At left is Karen, our daughter coming up the gangplank.

We left the car parked at the yacht's parking garage and took the bus downtown to the Edinburgh Castle.  It was a pleasant walk up to the castle from where the bus dropped us off. 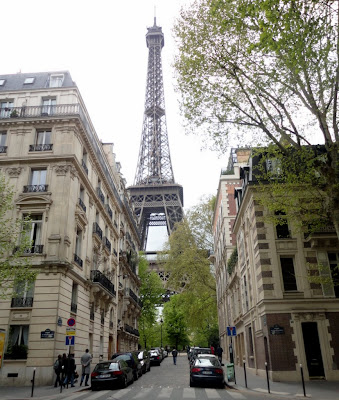 Eiffel Tower, France - Don't know why I didn't mention that.  Many, many times I've been there. 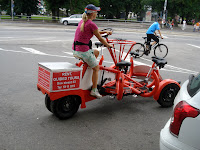 Estonia -- Been there most of the nice part of a day on a Baltic cruise in 2011 (link to blog posts).

Egypt - That was back in 1980 when we were on a Mediterranean cruise.  We started at Athens, Greece and went over too Haifa, Israel.  On the way we island hopped (Patmos and Rhodes ), stopped at old Ephesus, Turkey, then to Alexandria, Egypt, and over to Haifa, Israel.

At Alexandria we toured the library and then boarded a bus trip, which followed the Nile up to Cairo.  There we saw the pyramids and the Sphinx, rode a little boat where Moses was hidden as a baby, and of course rode a camel.  There we visited too the Museum of Egyptian Antiquities which is also known  as the Egyptian Museum or Museum of Cairo (link).  I enjoyed seeing the King Tut exhibits.

- I am in my fifth series of Alphabe Thusday.  I intend to put on some pictures of my travels when I can find a few.  Some are in albums, pictures I've taken before a digital camera came to me.  I haven't scanned any yet  I should have done that for Egypt, I have a lot.