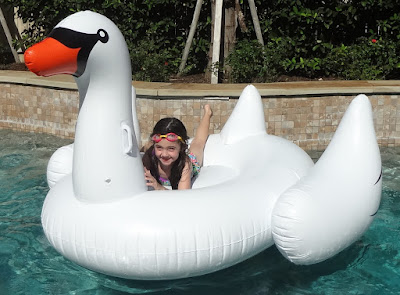 1.1st. Starts with B:  "B" is the beginning for the word, 'Bird'.  The bird pictured is a large pool bird, a white swan.  This is KP riding on it, she can keep the bird very busy. 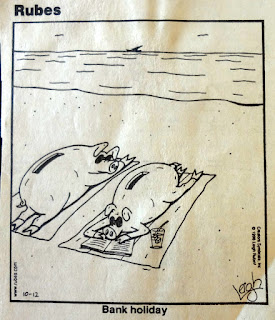 1.2nd. Starts with B:  "B" is also the beginning of the word, 'Bank'.  Here the two little pigs are enjoying being able to observe a 'Bank Holiday'.

Do you remember reading the comic, the "Rubes"?  This comic can be viewed daily (Sundays?) at Go Comics (link).  The link will bring up the day's publication.

His comic characters are mainly from the animal world.  I think that cows are his favorite although there are plenty of pigs.

This year, Rubes® celebrates its 30th anniversary! Rubes is syndicated in more than 400 newspapers and other publications worldwide. http://www.rubescartoons.com/ 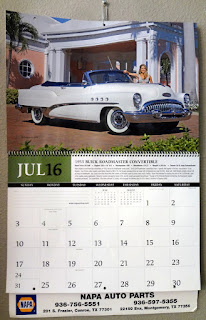 1.3rd. Starts with B:  "Buick" also starts with "B".  This pretty 1953 Buick Roadmaster Convertible will look my way from my office wall for the rest of the July.

My Uncle Howard drove Buicks and Grandpa drove them every other new car he bought, taking turns with Fords.  A spittoon carrier was bolted to the front cent hump for each one to make the car drivable.

It is the NAPA Auto Parts Classic Car of the Month.   I had to travel to Montgomery (Texas) to get my calendar for this year. Some of the dealers around Katy here weren't even ordering any. Our closest ran out way early, he obviously didn't order enough.

I missed the first edition but have collected one for each year since they began to be published.  A few came from Dad, he would always have the current issue but didn't save them after the year was over. 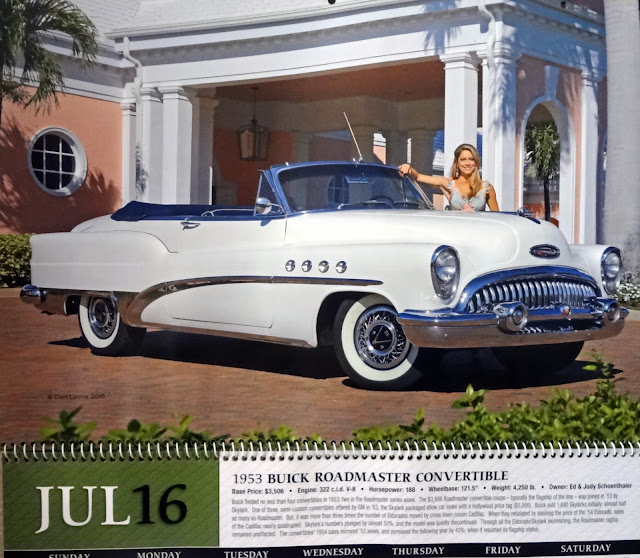 2. Week's Favorite:  Our 4th of July celebration was largely a success.  Since we are not in a city, there is no law against shooting fireworks.  I believe that every street in our subdivision, Cinco Ranch, Katy, Texas, had at least one house making a fireworks display.  (It takes an act of the Texas Legislature to make any one of the 93 Texas counties stop its citizens from shooting fireworks.)

Some photos and activities: 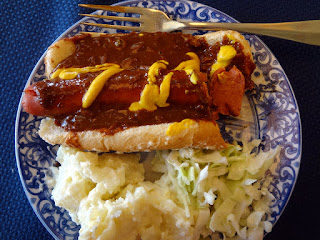 I made hot dogs for lunch.  They are slowly replacing the hamburger as the Number One American Food Favorite.

Mrs. Jim made "Mom's" potato salad and her own recipe for coleslaw.  It was all good.  Sorry that I took a bite of my hot dog before I remembered to take a picture.

Billy and Karen and KP joined us for food and the swim. 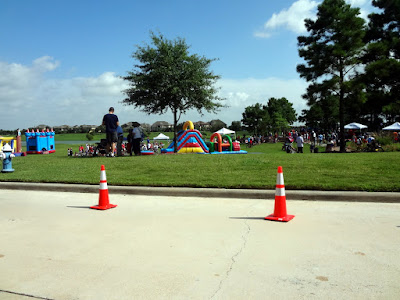 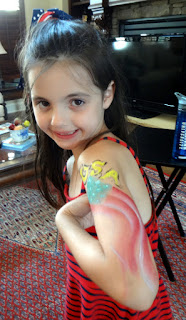 In the morning before swimming and lunch KP and Mrs. Jim went to our community's common area where the civic association had set up a play area for the children.  I am sure they tied things down good in light of the recent accidents from loose bouncy houses flying off in the Coastal Winds.
KP's favorite area was the train (sorry, no picture) and also the face painting.  Some of the kids were getting 'arm painting' and KP opted for that.  Hers was a very pretty American flag with a few yellow flowers.

We flew our American Flag in front of the house.  The civic association had also put a smaller flag at the curb in front of every house.

3. Patriotic: Our church service last week was very patriotic, the huge American flag hung in the back of our auditorium and much of the music was oriented towards being patriotic to our nation (U.S.A.).

If you look closely you can see some of he people attending were wearing patriotic clothing. 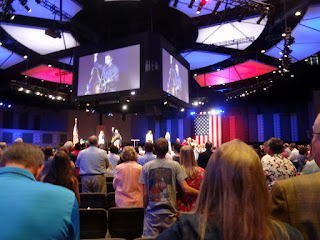 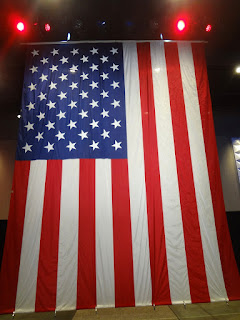