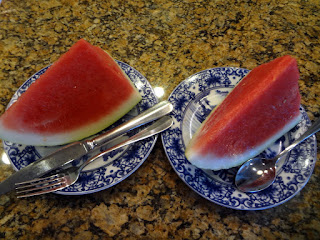 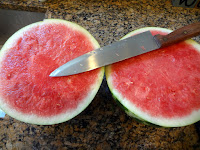 DO YOU USE a knife and fork to eat Watermelon or a spoon.  I will tabulate results for next week. 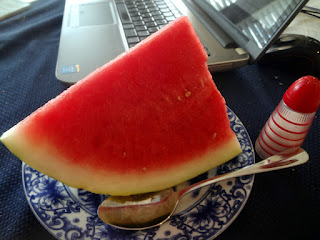 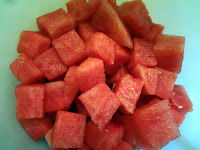 Please Vote with your comment for either, or something else.  Most 'something else' people will be eating it with their hands, taking big juicy bites.  I put salt on my melon use a spoon to eat it.
.
(2.b) Week's Favorite:  We have watermelon on the brain here this week.  Last weekend we drove up to North Louisiana, to Farmerville which is north of Rustin, almost to Arkansas.  Farmerville was holding its annual Watermelon Festival.

The celebration we had was to buy a round, five of us, Royce, Velma, Mrs. Jim, KP, and me of Sonic Drive In milkshakes.  They were half price after seven on Saturday nights all month.

We forgot to buy a watermelon there so we bought one Thursday at our grocery store.  Kroger sells Texas watermelons which are a bit better than most of them from Louisiana.
_ _ _ _ 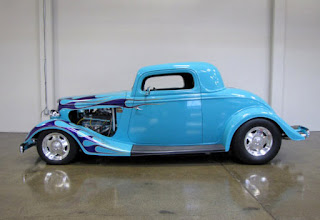 This one, on the left, is a 1 9 3 4 Ford three-window coupe.  Envision it without headlights, having the fenders cropped fairly close to the body, and with very heavy duty bumpers.

Oh yes, paint the number "88" on the doors and trunk and you will have our 'modified stock' oval dirt track racing car back before I got drafted into the Army.

Our car was very fast, it would almost always win the "B" Feature race.  We held it back so as to come in about third or fourth in our Heat race so it wouldn't have to race in the "A" Feature race.  Occasionally we would race there but never could come in first place. 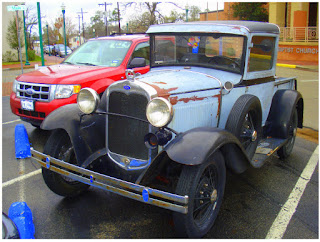 I counted twelve (12) Fords that I have owned, there is another, a 1937 Ford Tudor.  But technically it beloned to Dad as I was only 14 and it was my school car to drive into high school.  We only kept it for a couple of weeks, another story there.

(2.a) Week's Favorite:  It has to be Simone Biles, the U.S. Woman's Gymnastics first seat.  She is from Spring, Texas, which is a northern suburb of Houston.  The U.S. team should be having qualifications Sunday, August 7.  Much will be on NBC if I read the schedule correctly.  You can check for more, Google will get you there. U.S. is predicted for Gold.
(Photos are from today's H o u s t o n C h r o n i c l e.) 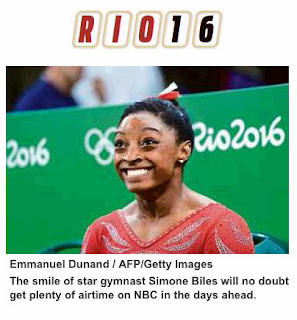 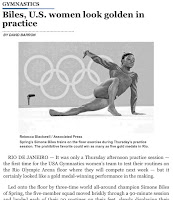 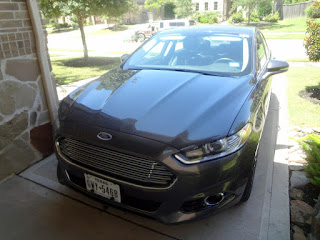 (3) Shiny:  This our is our Enterprise rental car for about a week, courtesy of Farmer's Insurance.  It is a 2016 Ford Fusion, fairly loaded, and with low miles. [You can click on it to see it better--back button gets you back here again.]

Did you know that NASCAR Ford Racing uses the Ford Fusion, hot-rodded of course.

A couple of weeks ago we were on our way to Baton Rouge to visit Mrs. Jim's cousin who is 96 years ago--she still drives around town.  We didn't get very far and a who was following us very close banged into us. 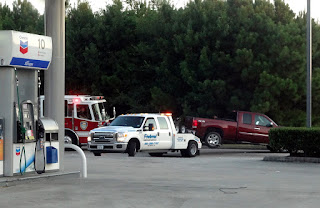 He banged into us and after about 50 feet banged into us again.  I thought sure he had road rage and I wasn't about to let him away.  We were in the left, fast, lane going about 40 mph so I just stopped.  A witness stopped in the middle lane beside us and soon a Harris County Sheriff Deputy also pulled in behind my witness.

The man was lethargic and not angry or excited one bit.  He said he was on his way to the hospital, I assumed under too much medication.  When he got out of his Bruiser Ford with a cow catcher front accessory to talk with the Sheriff's deputy he didn't stay because he was told to go get back into his truck.  He almost tripped on the curb going back. 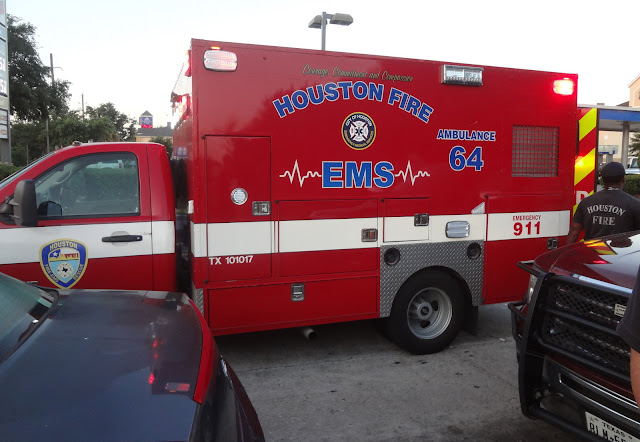 [Our car is the gray Cadillac in the lower left corner]
The Houston Police came and finished things up.  His cow catcher had messed up our back bumper pretty badly and the impact hurt both our neck muscles, I got a headache.  The medic recommended Mrs. Jim go to the ER but she didn't because we were on our way to see her cousin.  The police ordered the ambulance take the other driver to he hospital.  He wasn't quite elderly yet but he was 70.

After an hour and a half we were back on our way to Baton Rouge.  I did loose the left half of my temporary bridge eating an Egg McMuffin at McDonald's.  My headaches have mostly stopped and our neck and shoulders feel better.  The insurance wants to settle that part quickly, we haven't yet.  We did find out not to mix Advil or Aspirin with Meloxicam from the Walgreen pharmacist.
"
The Fine Print:
- Teresa of Eden Hills, (click), is running this meme, Friday's Hunt. Her rules are: "Welcome to linkup for Friday’s Hunt. It’s very simple. Anyone can participate. The link opens at 7pm Central time and will close Sunday at 7pm, so you have plenty of time to enter.