Watermelon way of eating survey - Here and Facebook total was thirteen (13):
Spoon - 4
Fork & knife - 5
Hands - 4, some others did this way when younger, I did out in the melon patch.

1. Starts with G:  Today "G" is for Green, green spinach.  Being retired, we have cut down on cooking and have tried to cut down on eating.  The later says we need to eat out more than we did while we were working.

Our favorite faster eating places are McDonald's, Wendy's, and a sampling of the various Chinese and BBQ places.  Luby's Cafeteria and Chick Filet are also on our list.

We hardly ever eat at the Chick Filet places here in Katy because we have not found one that has any 'extra benefits' for seniors to stop there.  In the Conroe/Woodlands and others we find when traveling offer a 10% discount.  But not here in the Katy area.  Katy is a Yuppie area and I really think Chick Filet would rather not have Seniors around.  They even build playgrounds for the kids, but nothing here for us Seniors!

When we eat at Luby's most times we get a coupon in our e-mail of a special.  This Tuesday we had a coupon to buy-one-get-one for their Luby's Combo Meal so we used it, saving $9.99 plus tax.  A good deal, Goodbye again, Chick Filet!! 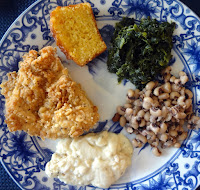 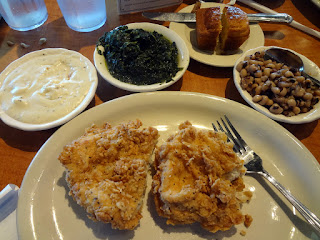 [on the left, my plate at home, right what I had at Luby's, divided to take some home]
Here is my plate.  First thing is do is to divide my food in half and separate it to one side.  This will be my noon meal for the next day or one more next.  You will note I had Chicken Fried Chicken with White Gravy on the side.  It is my favorite there.  Mrs. Jim had a fried white fish patty.

For vegetables I had Spinach and Black Eyed Peas.  Neither of these had I ever eaten until I met Mrs. Jim.  I was excused from Spinach and Oatmeal at home, the oatmeal made me gag.  I chose to show my Spinach picture as Spinach is a Green vegetable. 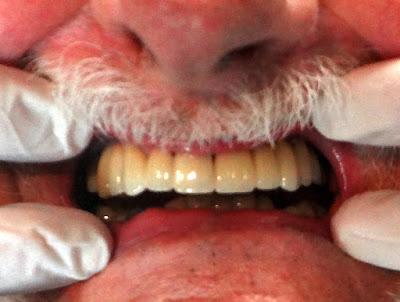 2. Week's Favorite:  I have several new teeth in this new bridge.  I've been wearing a temporary bridge.

The temporary bridge had broken three times.  This one is supposed to be affixed much firmer.

The third time it broke I came in to have it repaired or for the dentist to say it would be okay as half was still there.

[Please don't click this one.  It will get so big it will scare you]

Instead, since my new bridge was in, they just went ahead and put this one in. 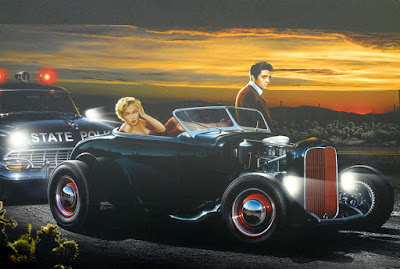 A celebrity must have gotten a ticket.  For speeding?

I've not had a '32 Ford but have had two 56's, a Ford Sunliner convertible and a Ford Four Door Hardtop.  Each has a history that I may never completely tell.

It qualifies as "Wheels" because the later models were about the most practical replacement for hotrods.  Mags hadn't been sold at consumer prices yet.  Wire wheels were an option for some cars.  These red ones were probably off a 1950's Mercury which would bolt on a later model axle using hydraulic brakes.
_ _ _ _ _