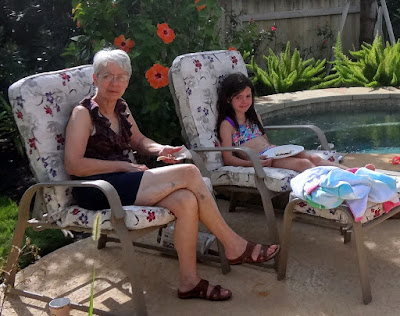 This week's Friday Hunt topics are: 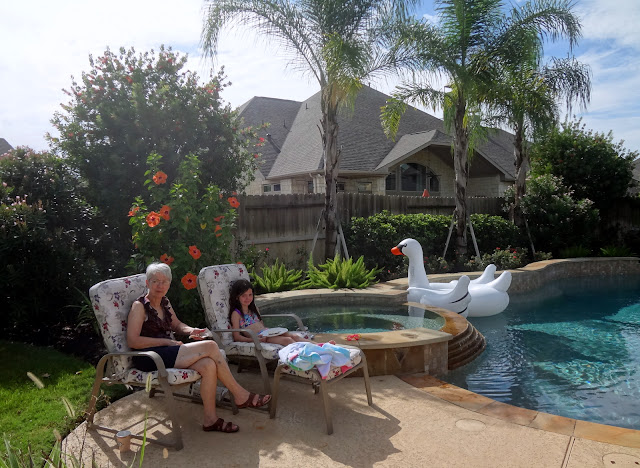 Starts with "H":  That would be our Home. Here would be KP and Mrs. Jim, soaking up some sun between the showers we've been having this week.  KP also did some swimming.

Week’s Favorite:  We've had KP as guest all week, she will be going home either tonight or Saturday morning.  Her favorite activity this week has been swimming.

Here are some pictures of her activities for the rest of our Week's Favorite: 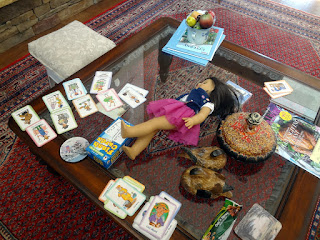 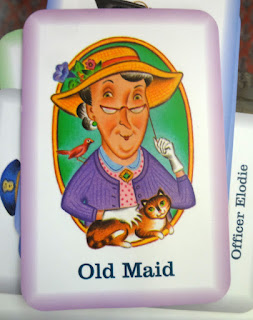 Old Maid is her favorite card game.  We played Old Maid quite a bit but also she likes Bunco so we played that one also.  For some reason we missed getting out the checker board.
I asked KP if the Old Maid were married.  She said, "No, but she used to be.  Her husband died." 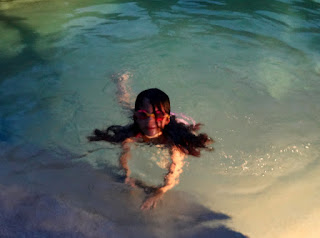 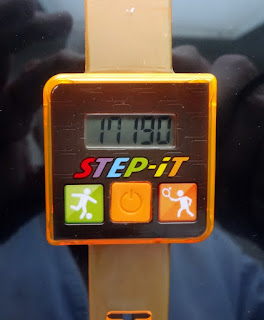 She even swims after dark.  The "STEP-iT" wrist device is the toy that McDonalds quite handing out with the Happy Meals.  She has two, this one she picked up when they stopped for brunch on the way to the Children's Museum down at Richmond, Texas, 24 minutes from here.  Starting with Zero and ending at bedtime with 17, 190 steps, I'd say she had a busy day.  Of course Mrs. Jim followed her every step. 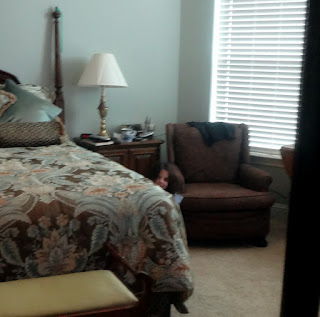 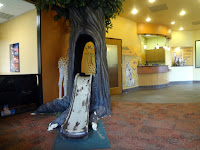 KP likes to play hide and seek better than we do.  But we do accommodate her.  I found her hiding behind the bed here.  Thursday she had a dental appointment so we took her to the local Pediatric Dental Safari for her checkup.  She is about to lose another front tooth but it stayed in for a later date to disembark. 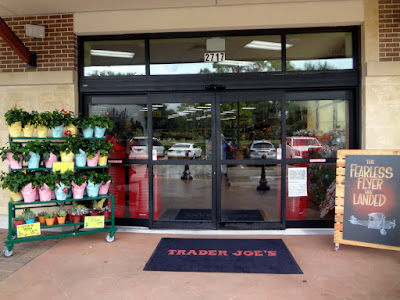 [click on any picture for larger sized viewing.  click again for super large]
My last picture is from our visit to Trade Joe's grocery store.  I like Trader Joe's because they have food samples all the time.  We went there because it is close to KP's dentist.  Our best bargain was a dozen Jumbo Grade A eggs for $1.49, the same price as a can of sardines in olive oil for me.  Bananas were also 19 cents each, I picked up three large green ones.  I won't bother you with the rest.

Single:  I should have left the old maid for this one.  She by definition is a single lady.

But I have found another Single item, it is a Single Exhaust as opposed to Dual Exhausts.  This would be on a car, explaining how many exhaust pipes car has, one two.

My car below is a 1936 Ford Tudor Convertible with one, i.e. Single, exhaust (lower picture, the shiny pipe and muffler running from the motor to the rear bumper).  Hot rodders would add another exhaust for better efficiency and more power. 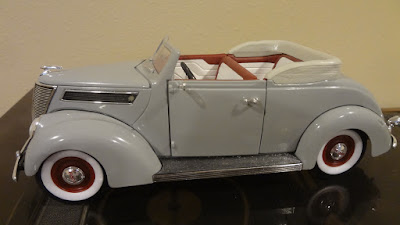 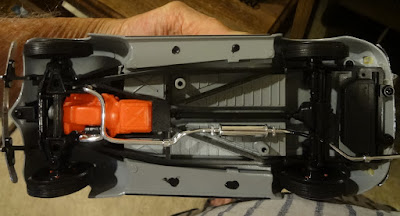 The next two cars have dual exhausts.  First is this pretty 2003 Ford Mustang Cobra which I bought from the parts people at the Ford dealer in Conroe, Texas.  Those parts people generally have a 'car calendar' having Ford car pictures for me sometime between Thanksgiving and Christmas time.

And this third one is a 1956 Ford Sunliner Convertible which came from the factory with dual exhausts with the standard Ford Thunderbird V8 engine.
Mine was white where this one is red, and a pale green where this one has black.  I bought it new when the law was giving me a really hard time about my loud mufflers.  That car was hot-rodded and needed those exhausts to accelerate quickly enough to stay ahead of the '55 and '56 Chevy's. 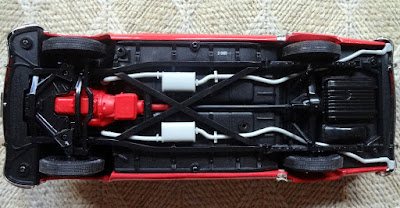 Did you notice that the '56 had no "X" pipe welded between the car pipes before the mufflers.  Doing that would have added several horsepower and would have helped it go quicker and faster.  All modern cars with V8 engines now have these.  My 1974 Mustang II does not.
I was drafted in May of 1956 and had to sell the car because my car payments were more than my total Army pay including a married with two kids (in December) allotment.  I placed it on a consignment lot and traded it for a 1950  2-door Jimmy Dean type Mercury.  I kept that car for five years and literally drove the wheels off it.  It was also very fast and had dual exhausts.
(image below and the 'definition' above are from Googling "Old Maid")