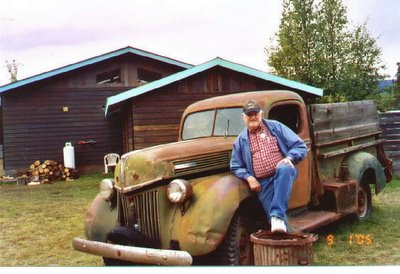 .. BACK BY POPULAR DEMAND ..
. . . . . . Jim . . . . . . . . .
[The demand this time was to have more pictures of people and less of animals. One of my favorite persons is Jim.]
.
I had been digging potatoes that day. It was cool and earlier had been misting a little. It was a good crop for the third acre plot. Must have been fifty bushels. They filled one end of the cellar.
.
I was reminded of the time I was born. No I can't remember it, but Mom had told the story often. The folks were very poor and the doctor should be paid but they didn't know where the money would come from. There weren't to be any hospital bills because I was to be born at home. Dr. Lukens made house calls.
.
The saving grace was a very large potato crop that year. There were plenty to sell and the doctor could be paid. Before and after this there were never enough potatoes to sell. We would eat them all before the next crop.
.
I felt like the little red hen too. Nobody came to help me harvest, but plenty came to help eat the baked potato and barbeque beef spread that Mrs. Jim fixed later that week.
# posted by Jim : 1/02/2006 11:36:00 PM

Comments:
Cool picture of you and that old truck!! That was some potato crop too!