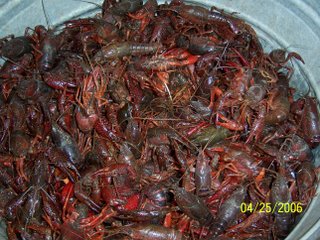 .
It's June Bug!
No,
It's May Bug!!
And a lot of them!!
[click picture to enlarge]
. . Remember the April bug? (link) Well, these are May bugs but they came early, a whole bucket we found, all those in the picture were here in April.
.
We do have a few June bugs now too, there aren't very many yet so the birds can eat them about as fast as they appear.
.
May bugs have another name, after the place they live in. You see they live in the mud and are also called mud bugs.
.
Southern people eat these mud bugs. They are boiled with a ears of corn and whole potatoes (enough for every eater to have at least one) and highly seasoned. The tail meat can be breaded and deep fried, put in etouffee (link) or gumbo, and a lot of other Southern dishes.
..
The best way to eat the boiled ones is to bite the head off and suck the juice out. Then split the tail and eat the meat that was inside. Some people dip the tail meat in cocktail sauce or tartar sauce.
.
---------------------------------------------------
.

You are getting ready for a crawdad feast! My husband loves those things!

You have to be kidding me. I have never seen anything so disgusting in my whole live. O.k. I am calming down now. But bloody hell that is well ummmm just plain well yucky.

I hope you enjoy them and think of me not eating for a week. LOL

I looked at the picture again because I am a sucker for gross. LOL They are not really bugs are they???

Its me again. Jim where do you live? Because I am never coming there. That other bug looked like a spider. Now you are just scaring me. I hate bugs with a passion. EWWWWWWWWWWWWWWW!!!!!! I have the gooseys now.

The minute that picture popped up I started to drool - crawfish. I love those.
Ralph

I don't think britmum liked the blog Jim. But that's just a guess.