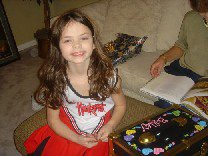 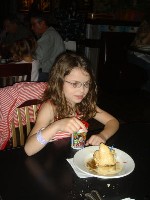 Things are never dull when GC#4 is around. She is tireless or at least us old folks have never been able to "wear her out". She gives us the opportunity to do the things again that our older grandchildren have outgrown such as the zoo, with their night opening with Christmas lights. That was fun as were the lighted paddleboats we got to ride in. 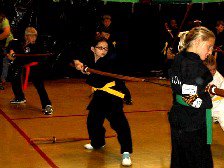 This is a picture of our newest grandchild taken in her karate class. Notice she is wearing her yellow belt. We haven’t seen her yet wearing her suit and yellow belt. She is now eight and is in the third grade. We love her very much and like to visit with her as much as we can. 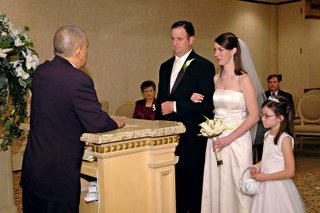 On December 20, 2005, this precocious little girl officially became a member of our family. Our daughter, Karen was married to our now son-in-law, Billy. Along with Billy came GC#4, his then seven year-old daughter. We are so glad.

PapaJay asked GC#4 a few questions and here are her responses.

Kabuki is her Pug

When she grows up she wants to be an author of children’s books. 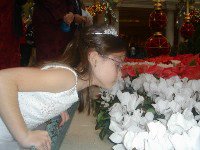 For sure GC#4 takes time to smell the flowers!

Today's blog is a joint effort of her Mimi and PapaJay, aka Jim and Mrs. Jim

Extra! Extra!
Read all about it!

I'm not as notorious as Cliff with his Morrow clan, but three of my kiddos are on Blogger. Karen, Susie, and Mitch. Welcome, Susie. They are all linked on the side here.

Let's Sleep Off Our Fat Now

What does this mean to us?

It may lead to better treatment of obesity and type 2 diabetes. Imagine sleeping off pounds. While in hibernation the body switches from burning stored fat instead of glucose.

Research mice at the Texas Medical School at Houston were left in the dark to induce a hibernation like state. Mice don't hibernate naturally, just as humans don't.

The researchers found one normally dormant gene became active in the mice left in the dark. That gene makes an enzyme that breaks down dietary fat. They then found elevated levels of AMP (Adenosine monophosphate). Formerly this compound was considered waste, but now they think it may be important in notifying the body to start burning fat instead of glucose.

Next should be to make timed release pills of AMP. One pill for one day's sleep and three pound loss, two for two days' sleep and six pound loss, etc. Order me seven to ten pills, please.

So, off to sleep to burn off some fat. Who wants to be first?

There was a nice newly-wed man, MrJ, who was just learning the ropes; his wife was learning how to 'train her man.'
I put them down for 'out of control' but I imagine things are changing fast up there in NJ.

*I know,know, these numbers don't match the 11 comments received so far. Do not worry, I have had e-mail and phone calls also.
Then I read a few family members' minds to make sure the results were accurate and would match my desired outcome.
That's the way I ran my classes, very democratic. I always wanted everyone to have an input and to express their opinions. However, since I was their teacher it always came out the way it was supposed to be.

I promised to tell when Mitch (link) blogged again. He has a good one tonight--my opinion because I can relate to it.

Mrs. Jim says:
"They should have executed him 25 years ago."

The article went on, "The U.S. Supreme Court rejected an appeal Monday from a 76-year-old convicted killer who argued that he was too old and feeble to be executed."

The TV announced this morning that he was executed.

This was a pathetic ordeal, Clarence Ray Allen, who was legally blind, nearly deaf and in a wheelchair had finally exhausted his appeal.

Is there a lesson here? Mrs. Jim has hers, think about the repercussions before you act.

Mine is don't wait until you are so old to kill someone. Kill in your early years then maybe you could die by age 40 or 50. Even quicker for Florida, they don't have many juvenile protection laws.

Now if I were to kill someone, I'm so old that I would die in prison before they ever could get to killing me back. Not a bad deal maybe, with high price of gas, food, medicine, medical care, etc. now-a-days. Please come visit me if I decide to take that option.

I could live the rest of my life off the state.*

*A slight problem here: I don't have anyone in mind that either (1) I hate bad enough or (2) is worth killing that would get me the death penalty.

You can live in Montgomery, Texas, where ...

7. There are 153 colleges and universities within 100 miles.

Labels: Why I live in Montgomery

.
When I have my way, our looks like the one on the left.

What are lids for? If toilets were so beautiful with them open all the time we wouldn't need them. My reasons for the lids:
1. TO PUT THE GAPING HOLE out of sight so it is prettier.
2. To put things on when we aren't using the toilet, sort of like an extra table.
3. To keep things from falling in. That will always do in the electric razor. Toothbrushes can be washed. Ask Jerry Seinfeld about that.
4. For ladies to gripe about when men leave them up. Well guys, I have to admit it isn't very pleasant to go in when it's dark and sit down on the toilet with both seats up.

There might be other reasons. I try to enforce my both lids down rule. Mrs. Jim has the first lid down rule.

Maybe yours looks like the one in the middle. Mine will be similar to that some day, except not an infant conversion, rather it will be an extender to help me get up and down easier.

Most of the time ours doesn't get like the one on the right. I have a plunger and a tool box together with my ingenuity keep it working.

There is a Web site of toilet bowl pictures at ToiletNet.com. They say no downloading* except from the download page.

I would like one (or more) of my Houston kids or grandkids to send in a picture of the one in the Cadillac Bar, along with a picture of the restaurant. The men's in the annex building would be best. Watch out for unmentionable graffiti. That place is a must see for Houston visitors.

Happy and Blue, you are welcome to take a survey of this for me. You have a much larger following than I do for sampling.

* The fine print from ToiletNet.com: Condition (rule) 1.3 "User may not download or copy the Content and other downloadable items displayed on this Web site for personal use (with the only exception being those contained on our downloads page). User shall not store any significant portion of any Content owned by or licensed to Toiletnet.com in any form."

[Breaking news, DanActive isn't working! Go here to read all about it!]

.
Check to see if he is on your payroll.
.
This might remind you of an old time medicine wagon remedy.


That isn't a good question to ask. I should ask if it is working. DanActive is a drink made by the Dannon company.

The rules are too small to read without a magnifying glass. I can read that the rules are available on DanActive.com or 1-877-DanActive.

No need to check the rules, DanActive is working for me after one week. Mrs. Jim and I are using DanActive Light with the same offer.

Here is what it is supposed to do:

Take the DanActive Challenge and find out for yourself!"

Probiotic literally means "for life" and refers to living microorganisms that, when consumed in sufficient numbers, exert health beneficts beyond basic nutrition.

I was told by an as yet not named relative that this drink will make us regular and may eliminate constipation. This was great news to me, as I was regular, buy almost to the verge of being constipated.

My problem stemmed from medication side effects. Two medicines especially. One might cause diarrhea and the other might cause constipation. For a while I actually boasted that they had a balancing effect on my system. Then for no apparent reason, the constipation side began winning.

DanActive put me back on the desirable side of this dilemma. Mrs. Jim hasn't passed judgment yet. For now, I will say it works.

Active cultures (nothing was mentioned about active ingredients, it must not be medicine) are L.BULGARICUS, S.THERMOPHILUS and L.CASEI DEFENSIS.

I haven't researched these, but think they are in sour milk.

We should be able to make this in our blenders.