A Good eBay Bargain for Me 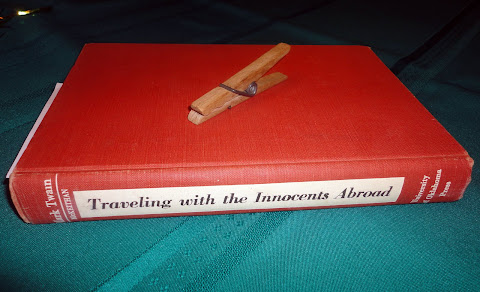 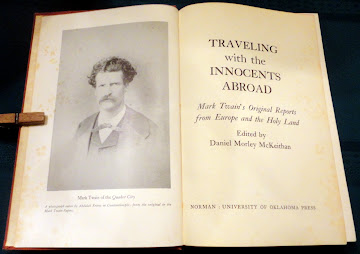 My book find is a 1958 (55 years old) first printing of  "Traveling with the Innocents Abroad; Mark Twain's Original Reports from Europe and the Holy Land; Edited by Daniel Morley McKeithan."  It was published by the University of Oklahoma Press at Norman.

My bargain price was $0.50 U.S. plus $3.88 shipping and $0.03 Texas Sales Tax for a total of $4.41.  I watched it for several days and then before the eBay auction was to close I bid $6.01.  Since the seller had established a starting bid, my bid was entered for 50¢ and it would automatically increase to meet competition as needed until I would be outbid.  Then I would enter another higher price and monitor the bidding accordingly.  That was not necessary as my 50 cent bid was the only one made.

The lowest on-line book store price I could find it for was $19.95 for a former library copy (plus shipping and also Texas Sales Tax if 'the seller did business in Texas').

Our college library, where I taught Business Law and other business courses, had this book on their shelf.   I started reading that copy several years back and only got about half finished with it.  It was a wonderful book to read in ones leisure because each chapter was a letter from a different place that Mark Twain had visited.  The library disposed of this book before I retired so I could not finish my reading.

Mark Twain took The Quaker City, a steamship with auxiliary sails, on a European cruise-tour.  He was one of seventy-six passengers who sailed from New York City on June 8, 1867 and returned after five plus months on November 19.

Twain was under contract with the San Francisco Daily Alta California (newspaper) who paid for this voyage with Mark to send letters back of his travels.   This he did by sending back 58 letters, all of which are published in my book.  Six of the letters were written for the New York Tribune, one for the Naples Observer, and the one for the New York Herald after his return.  The rest, fifty, were written for the Daily Alta California. 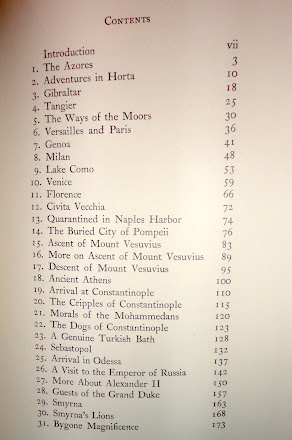 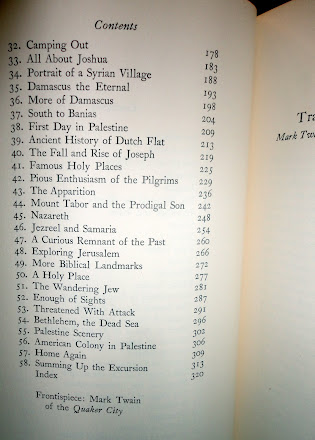 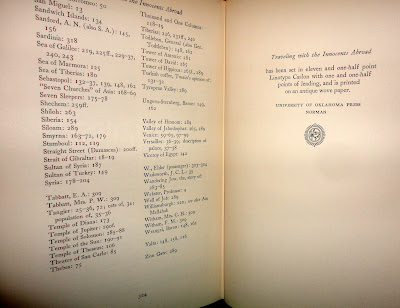 My book contains 325 pages not including the preface of eighteen pages, marked with Roman Numerals.  Five of these 325 pages make up the index at the end.

I will start my reading with Chapter 32, titled Camping Out, on page 178.  Here Twain picks up "In Camp, Mountains of Lebanon, Syria, September 11th, 1867."  The group had just returned from Ephesus, Asia Minor (now Turkey).

After finishing reading my book (who knows when?) I will start over.  I may reread the preface before beginning my reading as the part I read in getting information for this post was very interesting.

I have had no buyer's remorse because of this purchase.  Instead, I am a VERY happy camper with it.  Mrs. Jim and I have visited many of the places where Mr. Twain tells of his travels.  In 1980 we visited on a cruise tour of Greece, the Mediterranean isles, Ephesus (Turkey), Egypt, Israel, and Jordan.  Since then we have visited most of the rest of the places he has gone.

The last page, 326, shown above in the picture on the right, says the following about my new-to-me book:

Describe your life (or something) in a phrase using just six words for Six Word Saturday. Click the box at right to visit Cate's blog with Mr. Linky showing all the other blogs participating this week. Cate is the boss at Six Word Saturday. She would like for you to participate.
﻿

New Zealand and Australia; more of our most recent cruise pictures
Here we have some pictures to honor Alphabe-Thursday letter "M"

For a larger picture, click on what you want.
Click again and it should get larger still.
(The BACK BUTTON gets you back here.) 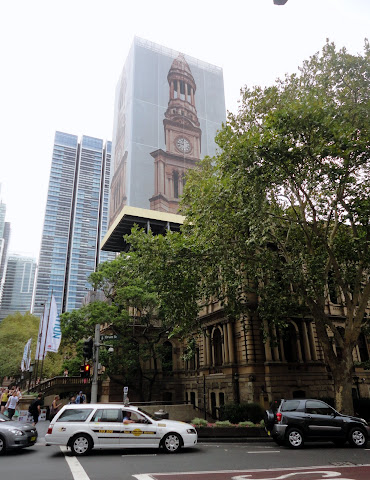 "M" is for More.  More of good things is what people are wanting.

So here are some More of my New Zealand pictures.  This will probably NOT be my last posting of them.

First I will show this one of the Sydney, Australia, City Hall.   The outside of the building, including the clock tower, are being renovated and cleaned.

So that the Sydney residents don't forget (why else do this??) what their City Hall should look like, the contractor has build this colorful four sided frame with the tower's picture on each side.

We did not go into the City Hall.  But is was in our line of sight from our hotel room, a couple of blocks away. 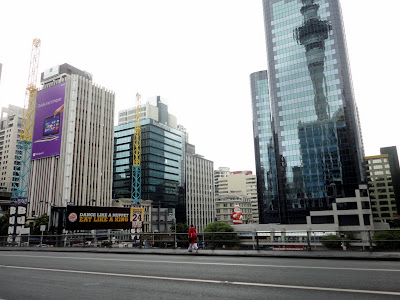 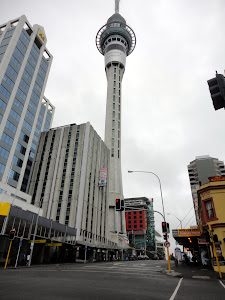 Our plane arrived in Auckland, New Zealand, at 6:00 in the morning but our ship would not be ready for boarding until the afternoon.  So for such happenings Princess has made hotel arrangements for a permanent hospitality room.  They had tea, coffee, and  snacks for us.  Princess also had a bus tour of  Auckland which we could purchase.

Mrs. Jim and I opted to not do either, the bus tour or wait in the hospitality room, but rather go for our own sight-seeing walk.  Auckland is New Zealand's largest city with a population of about 3.5 million people while the whole of New Zealand's population is only 4.5 million.  Auckland's skyline is very impressive. 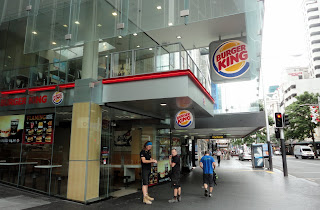 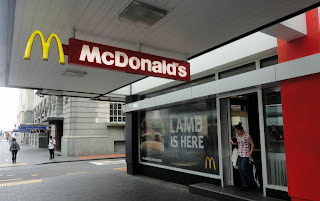 We walked about a mile down Queen Street to the harbor. My cameras have taken a lot of Burger King and MacDonald's restaurants and we passed these two on the way to the harbor.

When we reached Australia there were no Burger Kings.  Instead we found Jack's Burgers all over the place.  Burger King owns Jack's. 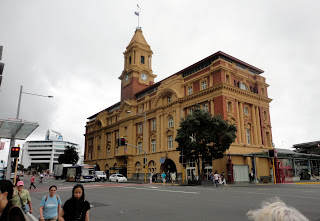 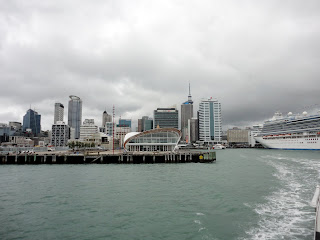 "[The] Britomart Transport Centre is the CBD public transport hub of Auckland, New Zealand, and the northern terminus of the North Island Main Trunk line. It combines a bus interchange with a railway station in a former Edwardian post office, extended with expansive post-modernist architectural elements. It is located at the foot of Queen Street, the main commercial thoroughfare of Auckland CBD, with the main ferry terminal just across Quay Street." (Wikipedia, Auckland Britomart, for more)

And it is just around the corner from the Burger King.  We didn't stop at the BK, instead we caught the ferry over to Devonport.  That was about a 40 minute ride, one way. We had a very nice view of the Auckland skyline from the boat.  At the right in the picture is our ship, the Diamond Princess. 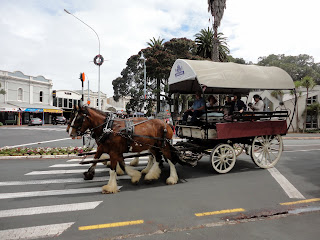 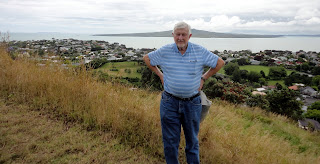 Devonport is a pretty little town.  Its most prominent feature is a hill named Mount Victoria pictured below on the left.  Of course mountains are meant to be climbed and Mrs. Jim and I did that. On the right, above, I am standing at the top.  Up there are a weather radar and an old bunker left there from WWII.

While we were up there an older man and his dog arrived, both having climbed the hill.  The man told us that he had originally lived in Scotland, quite a few years back had come to New Zealand to visit his sister, and then just stayed.  He was a sheep shearer in Scotland and also did that in NZ.  But he had to learn to shear them the New Zealand way.  We talked with him for about half an hour and must have picked his brain dry. 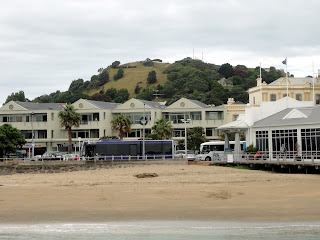 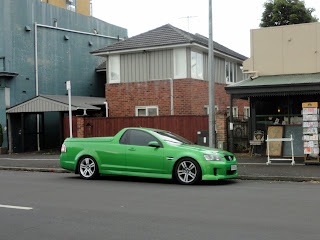 What is a Ute?   A ute is a pickup truck that uses a car body (Ford example).  The green one above is a modern Volkswagen Golf vehicle with a ute body.  In the states the Chevy El Camino and the Ford Ranchero pickups (New Zealand and Australia called those utes) are U.S. models that you might remember.


==> You can see other "M" letter posts by visiting Jenny's blog post, Alphabe- Thursday. My letter "M" portion of this post will be critiqued by Head Mistress Jenny. I always hope for a good grade.

My last post last week was about a "L" word, Laugh (also smile).


1. Do you ever have More things you like than you can ever tell about?
So far, since 2005, I have not run out of things to blog about.  Nor is my honey-do list ever emptied; etc. for other items.


2. What does a hill or little mountain in your way have for you to do?


I have climbed many, many, little 'mountains' and hills  Two of the most fun were Franklin Mountain in El Paso which I would climb at least once or twice every year and the little mountain range behind Waikiki Beach in Honolulu.

With my artificial knee joint I have slowed down on the climbs but I still like and can do most of them.


Bonus Question: What is your favorite "M" word?
. .
==>  My post is for Amanda at her Thursday Two Questions blog, Self Sagacity.
. 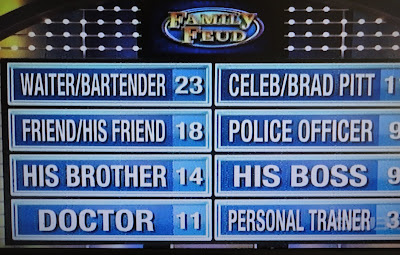 My daily schedule involves the TV always being on while I am awake.
No, watching TV IS NOT my inspiration.  But I need want your help.  I do hope this picture will be inspiration for you, my readers, to help me to remember part of what I did watch the day I took the picture.
Perhaps even you saw this on your TV.  If so, AND if you can remember better than I can, you can be the standard for the other's answers.  Please don't spill the bean's though.  SO, if you saw it and YOU KNOW the answer, please leave me your answer here in confidence.  After the quiz (??) is over I will publish your comment along with the others and give you credit here.
I need want to remember the QUESTION ASKED on a recent F A M I L Y .. F E U D program. It will be in one of these formats (total answers only shown for two or more giving the same answer, so these above will not total 100):
(please be a sport and leave a guess even if you don't have even a clue.  Thanks.)
"One hundred women were asked (the question that I forgot); or
"One hundred men were asked (the question that I forgot); or
"One hundred people were asked (the question that I forgot).
Your turn, what was asked that day on my program.
- - - - - - -
Two Shoes Tuesday is a place for bloggers to share what we enjoy doing most... writing! Each week Josie provides a one-word writing prompt and invite us to share a short story, poem, essay, thought, or photo relating to that topic.


The writing prompt this (as chosen by Kristina Perez) week for February 12, 2013, is "inspiration". For a list of and links to those participating, go here.
.