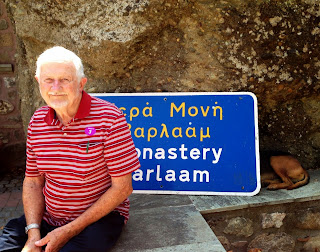 I am on an August Break from blogging but I just can't get away entirely.

If it's a habit then it might become addictive.  Ha ha.

This is my unofficial profile picture for the duration of my new series of posts about our Pacific Princess cruise from Venice, Italy, to Athens, Greece, via the Black Sea.  We just got back this week and the series started yesterday.

Mr. Tin Man will remain but "Jim with a sign and a dog at the Varlaam Monastery, Meteora, Greece" should appear on this series. [Mr. Tim Man]

Just scroll down to see what I have been doing during this "Break."

One thing we have done was to visit with SoulBrush (link) at the Market where she had a booth selling her pictures (we purchased a lovely original painting called 'Helping Hands' of two ladies carrying water).  We, Mrs. Jim, KP, and I, had a nice visit with S. B. and her husband.  I will post of this visit a little more later.

One:  This is my unoficial profile picture for the duration of this series of posts.  Mr. Tin Man will remain but "Jim with a sign and a dog at the Varlaam Monastery, Meteora, Greece" should appear on this series. [Mr. Tim Man]

The series will be of our Pacific Princess cruise from Venice, Italy, to Athens, Greece, via the Black Sea. 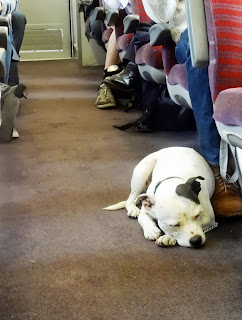 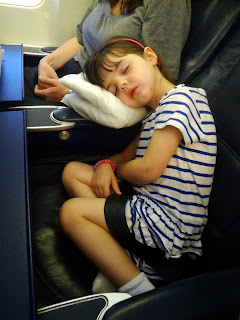 Two:  Say "Hello to the sleeping dog and KP."  We are riding the Gatwick Express Train from London to the Gatwick Airport where we will catch our plane to Venice.  Both of these little folk needed a nap.

We spent the night at the Sofitel Gatwick Hotel so we could be ready for our early morning flight.  Our room was very nice as we got upgraded to be across the hall from Karen and KP's room.  She is a Premium member which helped us a lot. 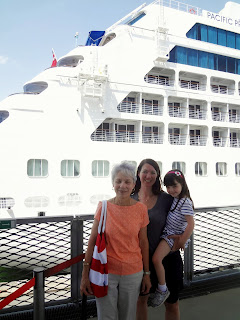 Three:  We boarded our ship about noon but it wasn't to depart until after nine.   The Pacific Princess is a Princess 'small ship.'  I think it was to hold 685 passengers and we were pretty well full.

Our room was eighth from the front in the middle row of balcony rooms,of the Port Side of the ship.   Six are showing here on the Starboard Side.

After we ate lunch on ship we took a water taxi over to the Old Venice Downtown.  All four of us had been there before so we mostly walked around.  Our other time was in 1980, Karen and KP were there a year ago.
.
. 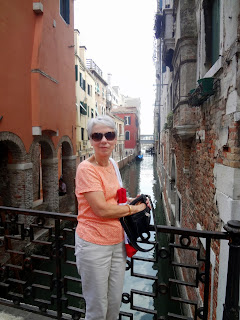 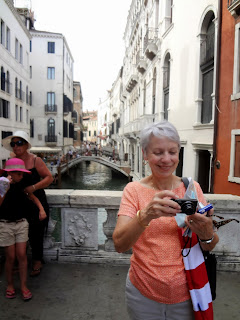 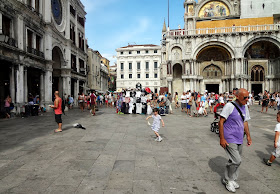 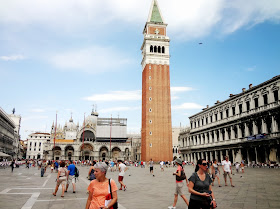 Four:  KP was chasing birds again.  In the lower left picture you can see one flying ahead of her.  I don't see her in the right picture but she didn't get lost. 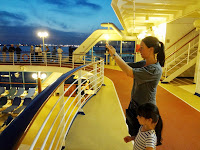 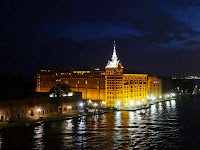 [Click on any picture to make it larger.  Use your "Back" button to return to the blog.] 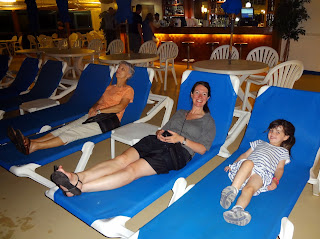 Five:  Our Sail-Away time was 9:30.  By then we had eaten supper and were ready to 'party.'
We sailed through the old part of Venice where we had been earlier in the afternoon.  It was very pretty all lighted up for the night.
And after leaving the channel we had to check out the sun deck chairs.  They fit very nicely.

Next we were off to Split, Croatia.

Our Cruise Itinerary pictured: [click on it so you can read it better] 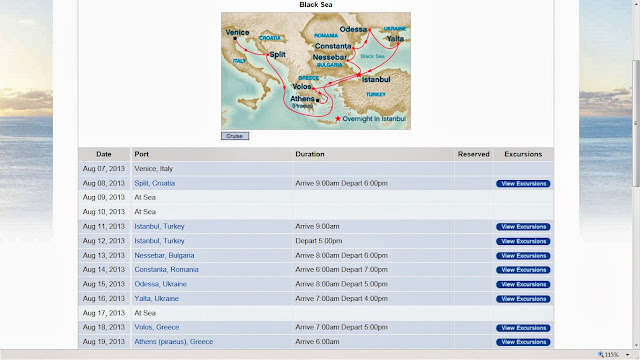 Fine print stuff:
==> I'm linked with Steve's Burnt Food for this today, go see his cat.
He and others have a Mr. Linky going there so you can see other cats too.
==> I am also linked up today with Nancy at A Rural Journal. She conducts her "A Random Five" blog hop there. Click that link to read other "A Random Five" posts or to join in with your own.

==> Click on any picture for a larger size and a better view.
==> Notes:
1.  Be seeing (BCNU) you on a more regular basis after my 'August Break' is over.
2.  My Feline Friday cat picture for Venice didn't turn out.  So instead I have these two dog pictures.  Sorry, but it might happen again. 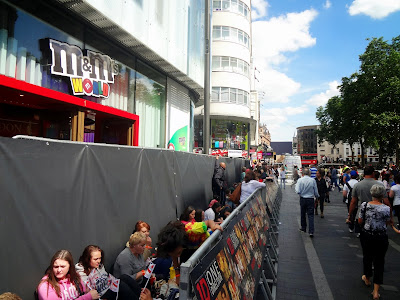 Not exactly lost though as we are just in front of the M&M Store.  Some of these people I will show here may be lost before it is all over.

They are waiting for a glimpse of One Direction members.  Some have been waiting for three days now. 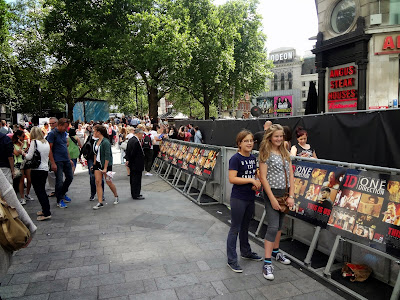 We came down town (London) to eat at the Five Guys Restaurant.

It just happened that when we got off the Tube at Piccadilly Circus and headed up to eat we ran into this bunch waiting at Leicester Square.
.
.
.
.
.
. 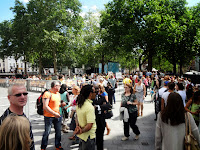 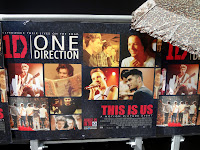 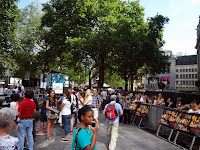 The picture at the center shows a little of what these 'lost' people were waiting for.  The beige umbrella originated from inside the barrier just as I was taking the picture.  I moved it once and it came back before I could take my picture.

I moved it again and this time it was let go.  I held it up and took another shot which I didn't used here as it was poorer quality.  After that I gave it back and said to the unknown and unseen owner, "Thank You."  That owner still unseen but sounding like a young female, replied, "You are welcome." 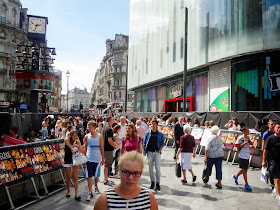 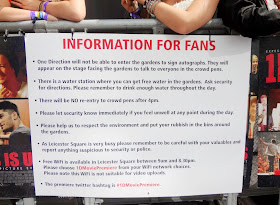 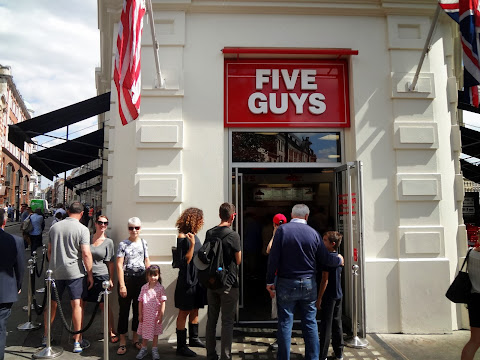 We finally made it to Five Guys for our American style meal.  Mrs. Jim had a grilled cheese sandwich and I had a BLT.  We shared a large order of Fries (not chips) and each had a Diet Coke.  The soft drinks came from the new red drink machines like we have in all the BK's (Burger Kings) in Texas.
There was a short line but not bad for almost two in the afternoon.  Oh yes, there were free refills on the soft drinks like in most all of the U.S.  Eating here very much could get to be habit forming on one.   The burgers were just like those in the States except that wouldn't really be a treat for us.  Hot dogs are just around the corner. 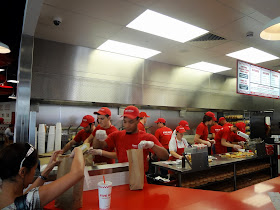 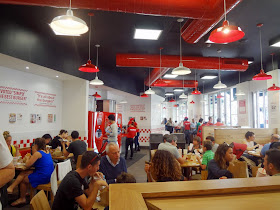 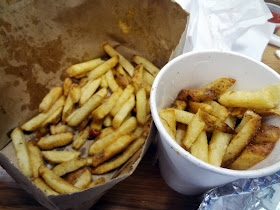 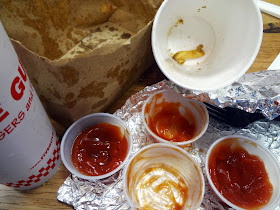 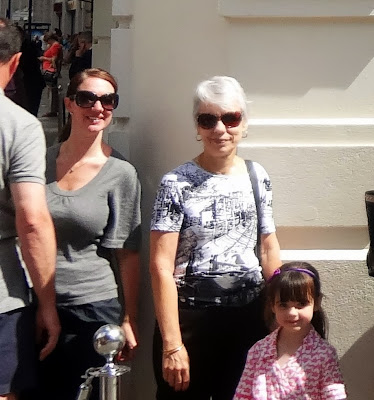 This is a picture that I enlarged from the Five Guys picture above.  Clicking on it will make it larger still.  Karen, Mrs. Jim, and KP were in the outside line (queue) waiting to order.  Billy was just getting settled and I was taking the picture.

The August 20th writing prompt words to choose from "Tuesday Two-Shoes" are Habit and Lost. Josie Said, "Have Fun!"  (link)

P.S. We are back to London now from our wonderful Princess cruise from Venice to Athens via the Black Sea and Istanbul.