Today we are starting a new 'meme' series of blogs called "Warm Heart Wednesday."  It is being headed again by our favorite school teacher, Jenny Matlock.  Jenny's instructions are basically this: 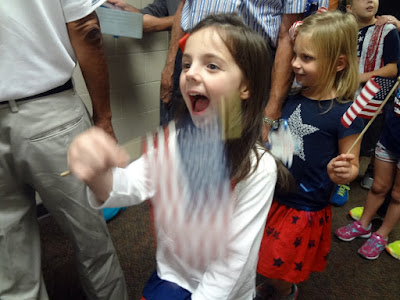 "Warm Heart Wednesday is for me (Jenny).
To start remembering.
And to make a journal of joy."
"I hope you will consider joining me on this adventure by sharing something that made YOUR heart warm over the past week.  I think it will be fun and uplifting to read your ongoing journals as well." 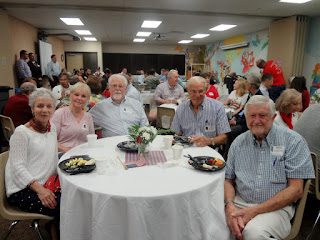 Exactly a week ago on a Wednesday morning Mrs. Jim and I were guests of KP's school for a Veterans Day Breakfast.  There was quite a crowd there, her school is very large. The fifth grade choir sang for us while we ate.

KP had invited me to come.  My service was five (5) years in the U.S. Army.  All of it except for basic training (Fort Hood, Killeen, Texas for that) was spent in El Paso at Fort Bliss.

A lot of draftees were bitter about that time in their lives, having to spend two years of their lives 'pretty much wasted.'  A perpetual group would always keep up on the mountain west of town a painted rock sign disparaging the Army.  I had then, and still do now sometimes, have bitterness for the five years out of my life spent there.

BUT, it really was for the good.  My second term, of three years, was spent learning electronics studying and attending classes for 42 weeks.  There I learned to maintain NIKE Hercules Fire Control Systems which consisted of three radar sets and the computer to track the enemy plane, the missile, and guide the missile towards the plane.

Upon the end of the second enlistment period I left the Army as an E-5 (a private started as E-1) we advanced one number for every grade promotion. After service I obtained employment as a Tech Rep Field Engineer with experience in lieu of a degree.

I went into Aerospace Engineering and worked with Philco Corporation which eventually became Ford Aerospace Corporation.  My jobs were at New Hampshire and ended as a Flight Controller at the NASA Manned Space Center in Houston.  Additionally I used my G.I. Bill entirely and finished college with a Bachelor and a Law Degree.  I changed careers after my schooling and spent 22 years teaching business courses at San Jacinto College in Pasadena, Texas.

That is why most times I will say the Army was good for me, but I was a total drain on the United States Treasury for five years.  I was ready but there was no war to fight.

I'm sure that was too much, TMI, but people need to know that the morale in the service sometimes stinks and there often is a lot of resentment for career and living time missed.  There is also though, an opportunity to learn a skill or trade and to get the G.I. Bill for training and education after getting out. 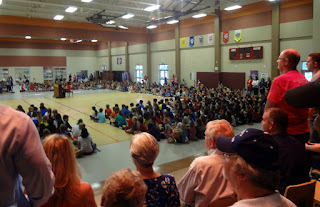 Well, anyway, after breakfast we went into the gym where the children were assembled in groups.  Different groups would sing the song for a certain branch of service and the Vets serving in that branch would stand.

Then our student child, grandchild, or whatever, would find us.  We assembled in one long column and proceeded to march around the halls of the school.  Students who did not sponsor a Veteran were sitting around the halls, back by the wall so we could march through.  Lauren liked this, she is the lead picture here, at the top.

Below is the Wall of Honor made in similar fashion as the U.S. flag.  I didn't count the stars but would imagine there were fifty.  The stripes were made of individual bio's of the Veteran.  Mine is pictured on the right of the flag. [click on it to enlarge] 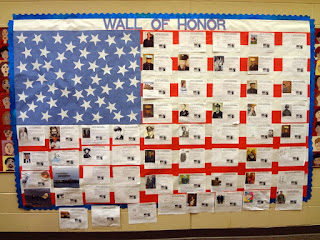 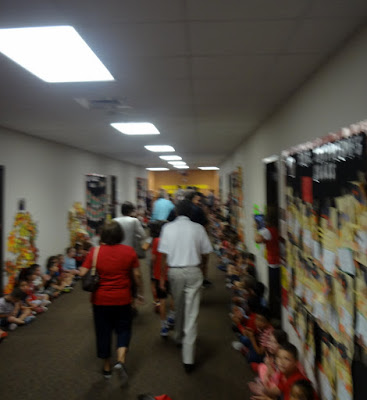 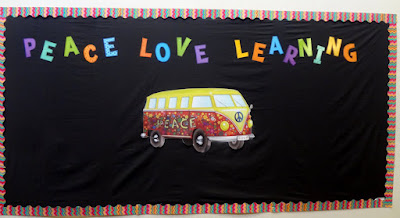 On one of the boards we passed in the halls.
I am linked with Jenny at her "Warm Heard Wednesday" page.  You may go to her post from here to post your warm hearted post or to view what others have posted for theirs.