Starts with A…Anteaters, aardvarks, and Australia 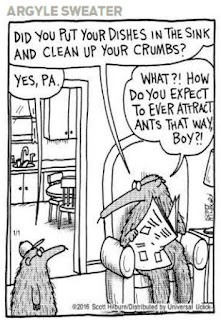 Mrs. Jim and I had this 'discussion' about the comic strip in Saturday's Houston Chronicle (Friday, January 1, 2016).

Old people don't have too many worldly things to worry about, like ISIS, Mexican immigrants, who will be our next president, etc.  Except that neither of us are for Trump or Cruz.  We think either would ruin our country.

Our discussion about the comic strip was about the creatures in the strip.  I called them Aardvarks, Mrs. Jim knew the weren't, just merely Anteaters.  My position was that they were the same creature by another name.

I was wrong.  Read on. Sorry I have no personal pictures.
BTW, January 1 is Mrs. Jim's Birthday.  We have had a nice day. 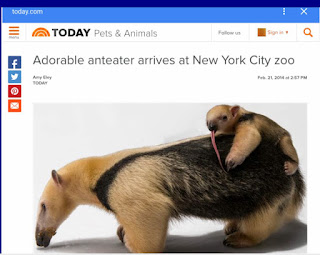 A distinguishing feature they have is a long tongue which can wrap around an ant or termite.

Other species are commonly confused with the anteater, including the common aardvark featured below. 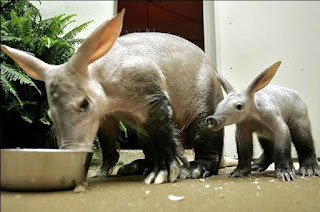 The aardvark doesn't have the pointy nose like the anteater but does have a long tong to catch the insects. (See the baby's long tongue in the picture above.)

Aardvarks originated in Africa.  They are often confused with the other similar animals with anteater characteristics. [picture from Wikipedia, a commons release (link)]

This chart from Wikipedia, https://en.wikipedia.org/wiki/Anteater_(disambiguation) , helps distinguish the various animals similar but not related to the African Anteater.

Australia is a nice place to visit.  One of my favorites was the wildlife animal rescue and reserve that we visited in Tasmania, Australia in 2003.  I blogged about this, click here.  I am sure that they had a Numbat or two there but I can't find a picture of any of them.  By going to the 'disambiguation' link above and clicking on the Numbat link you could see one.

Below is Mrs. Jim feeding a kangaroo on our Australia visit to the state of Tasmania. 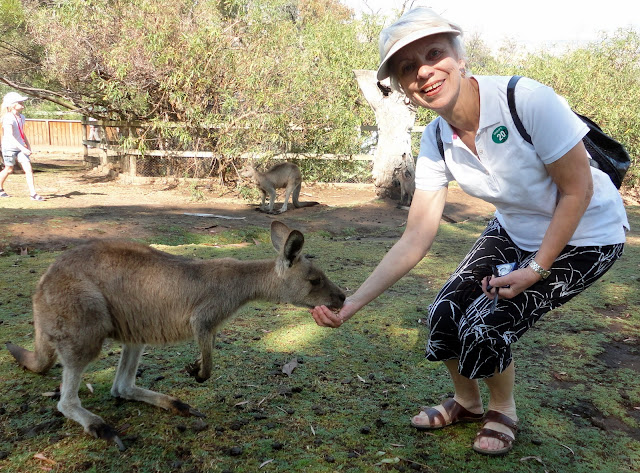 I did have this picture (below) of what I thought might be a Chinese Pangolin, scaly anteater common name (link), but now I think he was more of some species more like an Iguana.  I sure wish I knew what he is.  I spotted him at the Tasmanian wildlife rescue center also.
Perhaps maybe you know?

.
The fine print:  Teresa of Eden Hills is running this meme, Friday's Hunt. She has three alternatives for us to post about but this one, Alphabet series, will be the one I will try to follow and post about.
- Her rules are: "Welcome to the first linkup for Friday’s Hunt. It’s very simple. Anyone can participate. The link opens at 7pm Central time and will close Sunday at 7pm, so you have plenty of time to enter."
- The Mr. Linky address here has others who are participating if you would to read what these folk are doing for the Friday post. 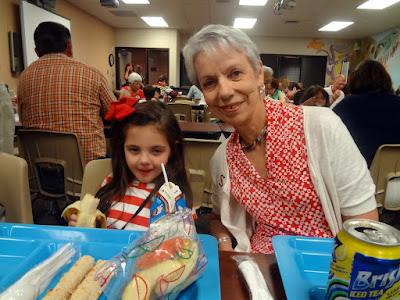 My heart was really warmed earlier this week when Mrs. Jim and KP came. A brief (?) scenario of the stuff before is needed.

Monday morning would begin a wonderful three days having our granddaughter staying with us. Mrs. Jim had set her alarm for 6:30 so she could be at KP's house at 7:20 so that daughter Karen could leave for work. KP was out of school for Christmas Holiday and both Karen and SIL needed to be at their work.

I was up at 6:20 and had coffee made when the alarm went off. By 7:15 Mrs. Jim was ready to leave. I had the alarm disabled for her and she headed out. I had not unlocked the back door though, so she fiddled with the lock and went into the garage. I quickly followed her and waved goodbye to her as she backed down the drive. She closed the garage with the remote and I was ready for my second cup of coffee.

But when I got to the back door, it was shut and locked from inside. After the fiddling with the lock she had it opened but must have set the lock again. When I went out into the garage I closed the hall door behind me, locking me out.

I was in my P.J's and my robe so I had to wait for Mrs. Jim and KP to return. I wasn't sure when that would be. They could just load up and come right back home. Or they could fool around for a while, maybe KP would want to show what Santa had left. Or they could stay there and play with new toys. All of these options had been discussed while Mrs. Jim was getting ready to leave.

Quite a bit of time passed, I figured they weren't coming right back. I had no watch and of course no cell phone or I would have called. So I got the two pillows and an old blanket and crawled inside my Mom's Mustang. I did go to sleep for a while, I don't know how long it was but it seemed they weren't coming very fast.

There were a lot of thoughts passing through my mind.  About people in prison. About whether or not they were really guilty of the crime they were convicted of. Most of all I thought of their loss of freedom. Things they couldn't do, places they couldn't go, and times they couldn't leave. .Escape came to mind. Most all escapees eventually were returned. I could leave but I wasn't dressed good.  For sure not well enough to spend a morning with people hadn't made real good friends with since we moved here in August.

Finally I set to emptying some boxes left from the move. I had saved the slower ones till last.  I thought of how Mrs. Jim generally calls when we are apart. How she might worry that I didn't answer or call her back when I could. And why, reasons, she didn't just load up then and check on me.

Also I thought of prison visits, especially where Jesus in the New Testament (Matthew 25:35-36)(link) had told that when we visited persons in prison we were visiting Him.

Finally the door opened and both KP and Mrs. Jim came hurrying towards me as I walked to meet them. Mrs. Jim hugged me but KP wasn't quite that glad to see me. She scolded me for being there and not calling them or answering the phone.

After we figured out what had happened and Mrs. Jim had shed a few tears of relief and of being sorry for me, KP did understand what had happened. I think though, that she wasn't treating it like a very big deal. Mrs. Jim and I?  We are still glad I was okay, it only lasted a half day, and have been thinking of getting a key to leave in the garage or under a rock.

I wrote a little poem about being confined for posting on my other blog, Jim's Little Photo and Poem Place, http://jimmiehov6.blogspot.com/2015/12/bad-morning-my-poem-for-tuesday-platform.html

Warm Heart Wednesday for the week of December 31.  Click here, http://jennymatlock.blogspot.com/ , for links of others or for directions to join with a post of your own. There Ms. Jenny is our teacher