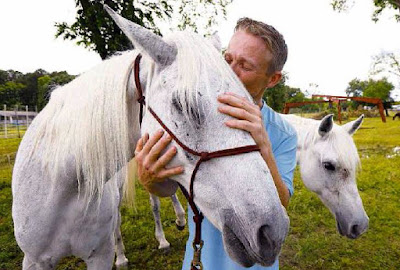 This pretty horse was one rescued from the Houston area flood.  Last week, link, I had posted about the horse rescue effort.  Then this Monday the H o u s t o n  C h r o n i c l e front page had another article this time telling about the completed effort.

What warms me is that the horse reminds me very much of my horse, Minnie.  Growing up, Minnie was our farm pony for riding.  We had other draft horses for pulling equipment and wagons (also a sled in the winter).

When I started high school I rode Minnie to a two room country school for my first two years.  New England School in Washington Country Nebraska held grades 1-6 in one room and 7-10 in the other.  The two years I went we had three students in each grade each year.

Minnie was colored like the rescue horse but we cropped her mane to help her heal a fistula.  After the healing we still kept her mane cropped to about two inches.  She was also a little wider in girth as she had quite a few draft horse genes.

Our ride was three miles, at the end of the first mile I was met by a pair of sisters, both riding their horses also.  Betty was a grade or two below me, Francis was in the one ahead.  Another quarter mile we were met by Vivian on her bike.

The girls horses would jump over the little streams that show up after the rains.  Soon Minnie, though an older horse, had also learned to jump.

When I transferred to a four year high school in town my dad bought me a 1937 Ford Tudor.  It had been owned by a little old lady so was a low mileage car in very good shape.  It also smelled of her strong perfume and makeup.  We could drive at age 14 to school or work back then.

Before school started Dad decided that I should not drive the car as it was an older one with mechanical brakes, not hydraulic--way before power brakes were invented.  That was his excuse for buying himself a new Ford pickup truck and my older Ford was his trade-in.

My sister, Lois (link), also drove the pickup to school for her senior year.  She did not attend New England country school like I did.  She rode with the cousins who had been riding with me for her first three years.  I taught her how to drive. 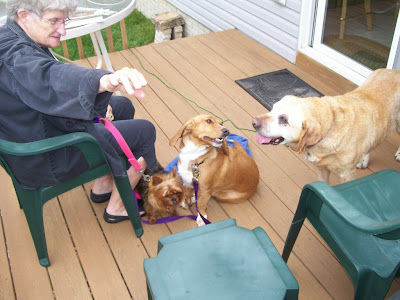 [Lois 'baby' sits dogs for her son and grandchildren. She had never said yes to
my request for her to 'baby' sit Adi. Probably she thought I wasn't being serious.]
Lois did knock down one country mail box, but just that one.  I had two accidents, neither was my fault.  One was when a drunk driver almost head-onned me as I couldn't take the ditch where I was on the road.  But at the last minute he veered and only swiped the side of Dad's truck.
_ _ _ _ _ _
:

The Fine Print:  Warm Heart Wednesday for the week of April 27.  Click here, http://jennymatlock.blogspot.com/ , for links of others or for directions to join with a post of your own. There Ms. Jenny is our teacher.