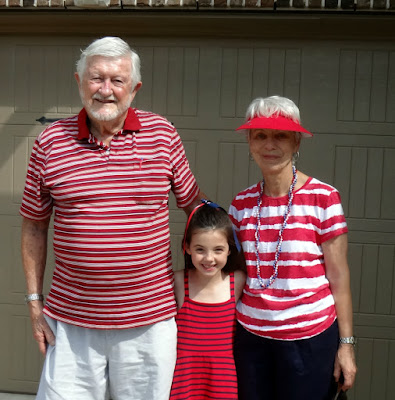 Jim, KP, and Mrs. Jim -- Goes with item 2, "Weeks Favorite"
as this week KP played with my toy 1964 Mustang Convertible.

[picture of a toy  1950 Studebaker Starlight Coupe, a cast iron model of my first car]
[for a list of all the cars I have owned, see item Four, here]
[I have quite a few cast iron 1:18 scale toy cars, this one included.] For the week of July 15th1. Starts with "C"2. Week's Favorite3. Unique Perspective

1. "C" today is for Car. Pictured here is a 1:18 scale cast iron model of my first car.  The Car is a 1950 Studebaker Starlight Coupe. It definitely was not a teenager car, it only lasted me a year.

The car originally belonged to my High School Principal and since I had borrowed Dad's pickup for over four months, he decided that I was old enough (until age 21 he had to sign for it) to have my own car.  And that this one would be a good one.  Elmer C. was a good friend of Dad's and had traded it in on a new one.  Dad knew that this was a good car, and it was. 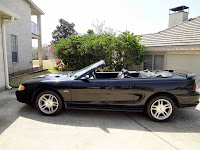 The reason that I had his pickup for so long that while I was in my second year of college, The University of Nebraska.  I had broken a metatarsal in my right foot.  Since I was walking a mile to college or taking the bus, I really did need the transportation.  Then I dropped out in January and did not tell Dad about that until I had a job.  But I also needed transportation to and from work even though Dad did need his pickup back for farming. 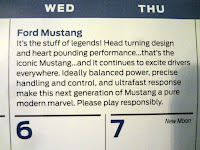 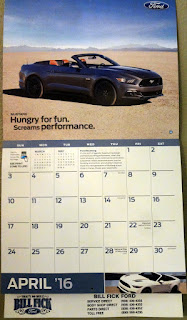 I still drive my cars hard but my 1998 Ford Mustang GT Convertible pretty well takes the punishment. A 1998 model, that makes it 18 years old with 108K miles.

I have had to replace the transmission and wisely put in a beefed up model. Oh yes, we still buy used cars (my Mustang was two years old when I got it) and have never had a NEW car in the 43 years we've been married.

I have others, still packed from our move last August.  I have owned one like the 1956, only green and white, and a 1937 Ford Tudor, but only for a couple of weeks (another story here). 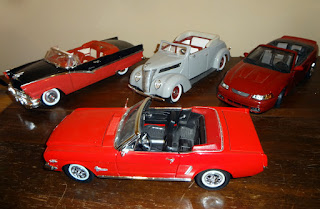 This week KP asked to play with these cars.  At first I was reluctant but then relinquished and said that she could play with the red '64 Mustang.  I do have two of these 64's.  She enjoyed playing with it for about 30 minutes.  She is also the only child who has played with any of my toy cars.

The next picture is of where these cars are sitting right now, on my early 1900's Aunt Minnie Desk.  The pitcher 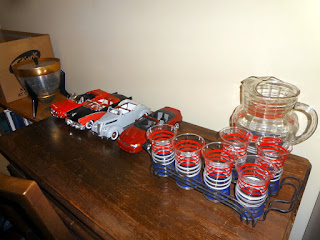 and glass set was my Mother's, now possibly out for the July 4th Independence Day celebration but mor likely they will stay there for a while.  The desk is in our Media area which we really don't use as it is upstairs.

The set should have eight glasses, two must have been broken or are packed in another box that we haven't opened as yet.  eBay may soon have our attention to find two more.
3. Unique Perspective:  Breakfast at Church with Themed Settings.  We tried to set a record for the longest breakfast table. Duno, it was about 500 yards long.  This was for Go Texas Sunday, you can see that theme always involves horses and cars and boots and western dress.  We ate good, real good, that morning.

I have an affinity for eating breakfast, as you can see here (click).  The next to bottom post will probably be more of the Church Breakfast that day. 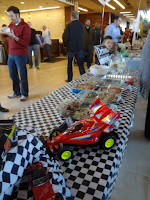 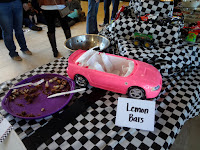 [Click on any picture to make it larger, again for larger still.  Back button returns to my blog.] 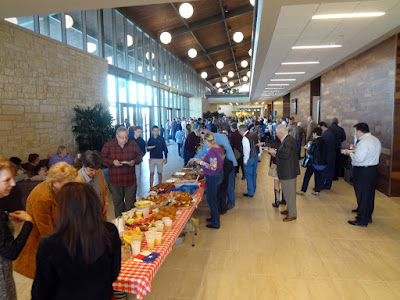