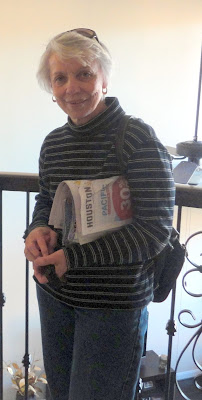 A man comes home from an exhausting day at work, plops down on the couch in front of the television, and tells his wife, "Get me a drink before it starts."

The wife sighs and gets him a drink.

Fifteen minutes later, he says, "Get me another drink before it starts."

She looks cross, but fetches another beer and slams it down next to him.

He finishes that beer and a few minutes later says, "Quick, get me another drink. It's going to start any minute!"

The wife is furious. She yells at him "Is that all you're going to do tonight? Drink and sit in front of that TV? You're nothing but a lazy fat slob, and furthermore..."

The man sighs and says, "It's started."

Joe Cosity used to send me one of these every day. His jokes are still at http://www.cleanjokeoftheday.com/jokes.html where I clicked on "Archives I"

The picture is of Mrs. Jim.  I smiled at the joke but it wasn't how we work.  Mrs. Jim has never brought me a beer while I was watching TV and I have never asked her to.

Here are some other past posts where I was using the letter, "L":
http://jimmiehov.blogspot.com/search?q=%22L%22 , for other requesters.


2. Week's Favorite: I was pretty proud of this sandwich.  Mrs. Jim was having eggs and grits for lunch.  I opted out of those although she volunteered to hard boil an egg for me with hers if I wanted.  I wanted. 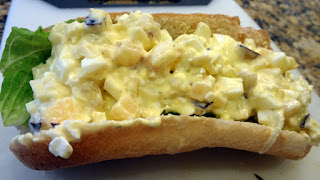 Before the egg was finished I had decided that I would like an egg salad sandwich.  I said that I would make her one also but she stuck with her grits.

My Ingredients, yours may vary:
- One hard boiled egg
- One hot dog bun
- A piece of onion, One large purple plum, One teaspoon tartar sauce, Mayo as needed for consistency (I used light), One teaspoon yellow mustard if you want, I did not, Salt and Pepper, I used a couple of pinches each.
- Other items that you yourself would add to make a deviled egg or egg salad
- Two fairly large Romaine lettuce leaves

I cut the center out of the hot dog bun to replace that part with my egg salad.  Dice the egg and onion into fairly small pieces, the fruit into larger.  Put in the lettuce, add the salad.  Yummy! 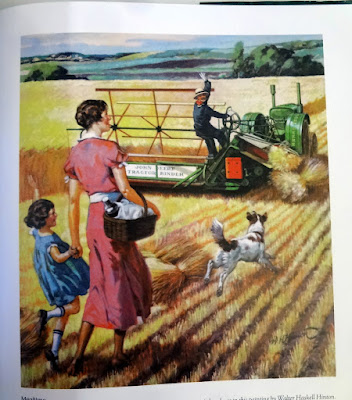 Most farm people have at least one Farm Dog.  If more than one, most likely only one will be the favorite.

Ours would be raring to come out to the field with the lunch like the dog in the picture.

The lunch for sure came in the afternoon and depending on what activity was there, a morning lunch also might be had.  Farmers can work up an appetite. Also a nice cold drink is appreciated mid-day.

This picture was one I found in an old John Deere book last Sunday afternoon during some 'stops' after church.  I don't think the illustrator person was very famous, there were no credits that I could find.

I did not buy the book, it was marked $20.00.  Dad had a binder machine like this one, he pulled it with four horses.  It cut the oats or other grain and when a bundle size was ready the binder put a piece of twine around it and tied a knot.

I think it kept maybe four and then dumped them.  Another person or the farmers would pile them in a 'shock' to dry.  The 'shook' had six to eight bundles and was sloped so that any rain before threshing could run off.

This operation, cutting and binding, and threshing happened in the summer so I was able to help a lot.  Dad would not let anyone except himself do the cutting and binding.  Now a 'combine machine' replaces the binder and thresher, combing both operations.  One think though, the grain will have a higher moisture content than doing it the old fashioned way.

Oh yes, now the farm critter dogs either come out with the trucks or stay home and play with the kids.
_ _ _ _ _