(A) Starts with the Letter "K":  King starts with the letter "K".  Here is a little poem about King Og that I found: (Hint, I've always been saying that he had big feet but that is not the correct answer.)

BED OF OG
"While browsing through the Bible once
I ran across the queerest thing:
A Bashanite of giant height
Upon his nation’s throne was king.
His name was Og. …" (more, please click here) 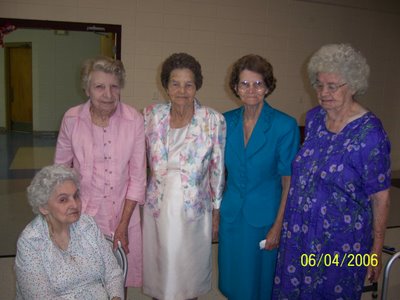 The five cousins
(B) "Keepsake" (Tom's Choice): This picture is a Keepsake, from 2006.  Left to right is Viola (Mema, Mrs. Jim's mother), Gracie (a cousin by marriage), Louvenia, Oma, and Ethel. All of them were born and grew up in Central Louisiana. They all still lived there, except for Mema, who lived in Texas near us. All were widowed, all have died since 2006. 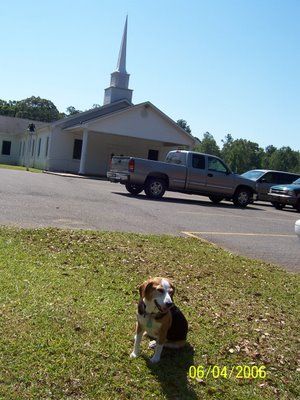 Adi was certain she was going to have to stay in the car
while we all were enjoying food things in the church
[This photographer is overpaid]
We met at the New Hope Baptist Church in Elmer, Louisiana, for Homecoming 2006. Only Mema had been able to come to the family reunion the week before in North Louisiana, so this was a second reunion oppertunity for them.
. 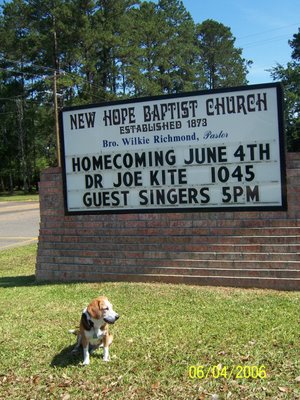 Adi wonders if she will get to eat with us
The service was good, the guest minister, Dr. Joe Kite, gave a fiery sermon. He was about a year older than me, both of us slightly younger than Methuselah. He had a keen sense of humor. Since he didn't know us, he looked our way a lot; sure he didn't want to miss an opportunity for a convert.

The piano player played like church music should be played in a Louisiana country church. Her grandmother was a cousin of some sorts to the five cousins.
Excerpted from (read our escapade from this link below) http://jimmiehov.blogspot.com/2006/06/family-reunion-ii-meeting-of-five.html

Adi was our Beagle dog.  She and I were a registered Pet Therapy pair.  (Adi's meme ) 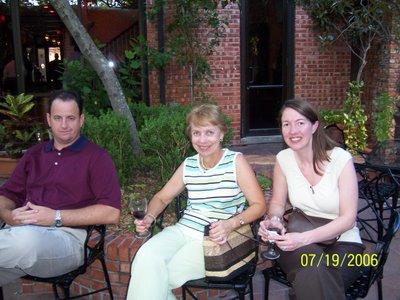 (C) A Favorite: We had been celebrating our younger daughter's birthday and stopped off at Brennan's Restaurant for an open house with wine and hors d'oeuvres; also there was a kitchen tour and demonstration by the chef.
I forgot to ask if the original restaurant in New Orleans had reopened yet after being devastated by Hurricane Katrina (link).  [This is pulled from a 2006 post, you will have to imagine these folk aging 14 years (link to 2006 post)]. 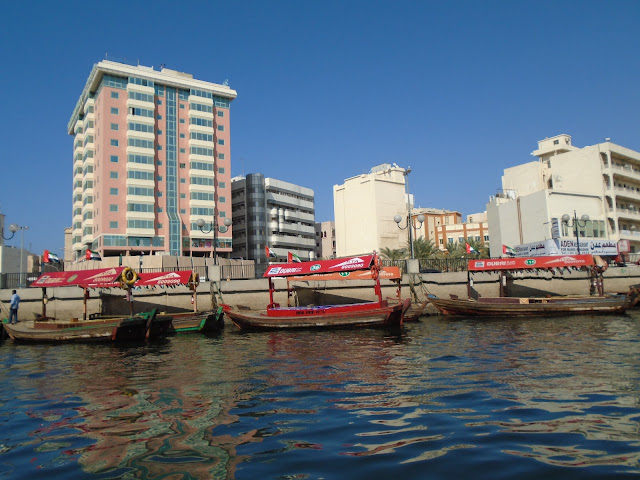 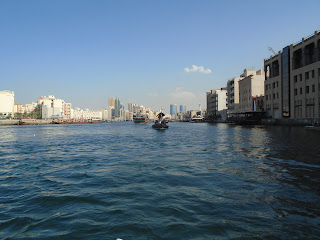 (D) Reflections:  Parked water taxis at the Dubai Harbor.  We were headed toward the dock riding in one like these.
_ _ _ _

1.  What is your favorite "K" word?   Mine was hard to decide.  I settled on Kind.  My MIL, Mrs. Jim's mother had a favorite Bible Scripture verse that she taught to all of her preschooler Sunday morning Bible class.  It was "Be ye kind one to another..."

She once came into her room one morning and two boys were fighting.  She asked them, "Boys, boys, do you know what Ephesians 4:32 KJV says?" One replied, "Yes, Ma'am, we know but we just ain't doing it."

2.  Tell about one of your experiences with water travel.  We like to do the "Transition Cruises" offered by the cruise lines.  Our first was from Fort Lauderdale to Los Angeles through the Panama Canal.  It and Princess below both were sailing for over two weeks.

Then we have done several to Europe on the Princes line.  Our favorite there was on the small ship, the Pacific Princes, from New York City to Brittan.  It stopped at Halifax, Newfoundland, three stops in Iceland, and two stops at Scotland, then it cruised on to Dover, England.
_ _ _ _

The fine print:
- [Click on any picture for larger, click it again for extra large]
- I am linked with Tom of "Backwoods Travel" (Link here to click for Tom's Weekend Reviews)
- I am also linked this week with James of "Weekend Reflections" (click here for his Reflections Photos).
- The pictures mostly are all mine and rights are reserved to me under Copyright Law.