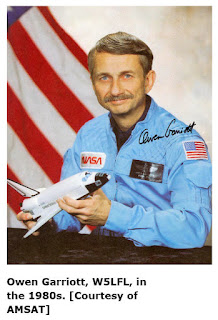 I was saddened to read this today.  At NASA I worked with Owen Garriott when he first began training for Sky Lab.  I gave him his first lesson, "Orientation to the Sky Lab Cabin and Controls" on the Mock-up we had for training purposes.

From http://www.arrl.org/news/amateur-radio-in-space-pioneer-astronaut-owen-garriott-w5lfl-sk :
"04/15/2019
The US astronaut who pioneered the use of Amateur Radio to make contacts from space — Owen K. Garriott, W5LFL — died April 15 at his home in Huntsville, Alabama. He was 88. Garriott’s ham radio activity ushered in the formal establishment of Amateur Radio in space, first as SAREX — the Shuttle Amateur Radio Experiment, and later as ARISS — Amateur Radio on the International Space Station.

“Owen Garriott was a good friend and an incredible astronaut,” fellow astronaut Buzz Aldrin tweeted. “I have a great sadness as I learn of his passing today. Godspeed Owen.”

An Oklahoma native, Garriott — an electrical engineer — spent 2 months aboard the Skylab space station in 1973 and 10 days aboard Spacelab-1 during a 1983 Space Shuttle Columbia mission. It was during the latter mission that Garriott thrilled radio amateurs around the world by making the first contacts from space. Thousands of hams listened on 2-meter FM, hoping to hear him or to make a contact. Garriott ended up working stations around the globe, among them such notables as the late King Hussein, JY1, of Jordan, and the late US Senator Barry Goldwater, K7UGA. He also made the first CW contact from space. Garriott called hamming from space “a pleasant pastime"...(more at the link above)”

We have a couple of pottery pieces designed and crafted by the now deceased former Mrs. Garriott, a "Moon Jar" and a "Sun Jar" that we proudly display at our home.  You can see them here on my older blog post.

Additionally, their daughter was in one of my college classes, taking it for dual credit, college and high school.  We did discuss her brother who later also traveled to the Space Station as a civilian.

I am a Ham Radio licensee but never did make contact with any of the Garriott's via Ham Radio.

Comments:
Both lovely pieces. I'm sorry for the loss of your friend.

Have a fabulous day, Jim. 😎

I too am sorry to hear that ya lost a friend.