Eating with the Jim Bunch for a month

Thought I'd change up here a little bit and put some food ideas on. You will see some of the types food I like.

[Click on any picture for a large view, where available you can click the link for Jim's supper sized, super size if you'd rather.] [click here super sized]
New Years Day in the South means black eyed peas and cabbage. The peas are for wealth, the cabbage for health, during the next year and the future. And of course good Southern food is cushioned by made-from-scratch cornbread. The ham was from Thanksgiving day leftovers.

We don't believe in influencing luck by what we eat, but it is a Southern tradition we have followed for the 34 years we have been married.

Southern people eat black-eyed peas, most Northerners don't. When General Sherman went through the South burning everything, including the food supply, he didn't mess with the black-eyed peas. He thought they were food for the cattle, and his troops had already killed or eaten the cattle.

So, the people who survived boiled those beans and ate them. It was like they were rich, they had a lot of food. Only thing, it was all in the granary formerly food for the cattle.
I have no idea why they eat the cabbage, I'm sure it too was at some time they were lucky in health and had been eating cabbage. For supper that night we would share this frozen Runza. It was the of last Runza's we brought back from Nebraska in early December.
[Runza information blog] Mrs. Jim's Sunday school class had their annual New Years Eve party at a member's new home. About half of the 120 or so were there. At that age a lot were baby sitting with the grandkids. We were eating 'light' to bone up our appetite for the New Years Eve party! These are all Thanksgiving leftovers except the banana and pineapple fruit salad. That pretty well cleaned up the left overs except for meat. Before the game we visited the University of Houston Alumni tailgate area. Here we are eating a sausage tortilla. That was excellent, the guys got two links in theirs. BP, me, Karen, and Mrs. Jim were chomping down. Billy took our picture.

Right after I went looking for drinks. We all had water (bottled) and I had a 7 UP in as well. We had a hot dog and coke at the game later on.

Billy and I are alumni, Mrs. Jim was an adjunct field placement teacher for the School of Social Work. [Karen is Baylor, Mrs. Jim is LSU, Bailey is shopping around.] Anyway, the Houston Cougars didn't play good enough, TCU won by a touchdown. Not too bad, I guess, for playing without a coach. We all enjoyed the Cougar Band playing at half-time. [click for super size] Karen, Billy, and BP came to eat with Mrs. Jim and me. I was taking the picture.

We had baked brie with crackers as appetizer. Mrs. Jim had cooked ham and roast beef, and she made dishes of green beans, mashed potatoes, beef gravy, sweet potatoes, made-from-scratch dinner rolls, a spinach and lettuce salad, and three kinds of pie. The pies were pecan, apple, and pumpkin.

Needless to say we had some leftovers. A couple of Saturday nights before Christmas we had our family Christmas gathering and dinner. Tim's friend, Terry, had all seventeen of us at her house.
Here we have Mike's wife, Sharon, and Karen and Mrs. Jim. The breakfast room and kitchen were favorite gathering places. The reception was held here and in the colonial house across the driveway. The band was under this tent with us. Click here for the wedding post.

The snowy day in Tekamah, Nebraska The Cliff Bunch and Jim Bunch both eat good! Click here for the blog story.

At the Blair (Nebraska) Bakery.
The last was the first in time for this series. In the mornings we would have coffee and fresh baked rolls for breakfast at the bakery. That could get habit forming.
Just a small boast here, in the year 2007 I did not eat one single donut. We will see how it works in 2008, that was probably a silly thing, denying myself of the sweet goodies. 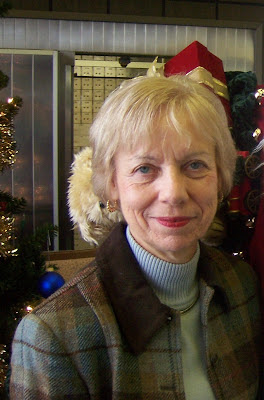 She was a New Years Baby!

See what's at the end of the rainbow below!

Terry (click here) in her birthday wish
on her blog today made it all clear! 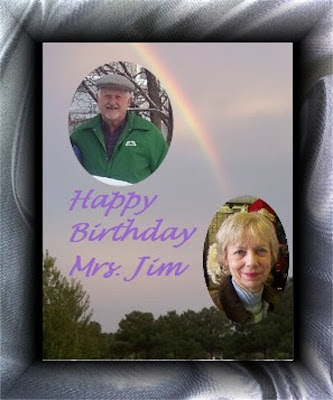 This picture and more
are on Terry's blog