This week Linda (click her icon, right, if you want read others or participate in this) asked several questions.

She has a neat meme this week. Neater than for the amount of time I have to write it. But I will jot a few notes in a different format than usual for me. There could be more to my life than I have related here but this is all that I will write. I am especially thinking of some of the experience while working part time jobs.

Next, here are Linda's questions and my answers:

1. What did you want to be when you grew up?
A farmer or a truck driver

2. Why did you want to be that, and did you do it?
Dad was a farmer. Truck driving looked like fun.

3. Did you consistently plan to be whatever it was, or did you change your mind often?
I didn't worry much about it. I worked part time summer jobs of for the moment.

4. Did you do anything like volunteering or interning to give you a taste of your future occupation/role?
Not really. When I was in law school (University of Houston, Bates College of Law) and working 50-70 hours a week at NASA I volunteered as a briefing clerk for an American Civil Liberties Union (ACLU) attorney.
The attorney has since been appointed a federal district judge. I got a reputation as being liberal.

5. Were you as happy/satisfied with what you became as you thought you would be?
I have been happy with every job I have ever had, even the part time ones--except one. When I was at the watch factory I was also a college dropout (University of Nebraska) and decided that I was unsuitable for academic study and would be working with my hands for the rest of my life.

From the Army electronics training I developed a hobby, that of being involved in Amateur Radio (HAM Radio). I have been continually licensed since 1961 and hold the Extra Class Amateur Radio Operator license with the call sign of K1TLT. That was my first call sign as a General Class and was KN1TLT during the short time that I was a Novice Class.
6. What surprised you?
In the Army 43-week missile school I was third in my class of 130 students. Two warrant officers were ranked ahead of me. I was ahead of the rest of the officers and was first among all the enlisted. That caused me to think I may not be stupid for learning things after all.

7. Would you choose it again?
I believe that I have told every one of my college classes that working life is long and at these students' ages they should prepare for doing something enjoyable for the rest of their lives. Definitely not would to be learn a profession such as nursing solely in order to finance a hobby or avocation (like writing music or being a race car driver).
I would choose every one of my working experiences. At NASA I taught and trained astronauts and flight controllers and got to see the BIG picture. During missions I would sit on the Environmental Control or the Electrical Power Systems console. That involved monitoring the appropriate systems from telemetry data and helping to make real-time operational decisions.
My college teaching put me in a position to help many of my students get hold of their lives and work toward being a productive society member. My own dropout and recovery experiences helped with this.

8. Do you still want to be something else - either in addition to or instead of?
I am something else, retired. A retired engineer ($214/month pension) and a retired college professor (no pension but I do have a small 403b retirement fund).
At times I would have liked to have been a preacher. I have started taking some seminary courses on an audit basis.
And lastly, a person cannot escape working responsibilities. I am a co-teacher with two other retired persons teaching a coed Sunday school class, ages 70 and older (you don't have to be that old to teach them or to be a class member really). I no longer am paid but I do keep busy with that and lots of other fun and helping tasks.

Cars and other vehicles in my life

These are about in the order they were purchased. Most were pretty good cars, I just always get used cars, buying them mostly from individuals, LOLs (little old ladies) preferred 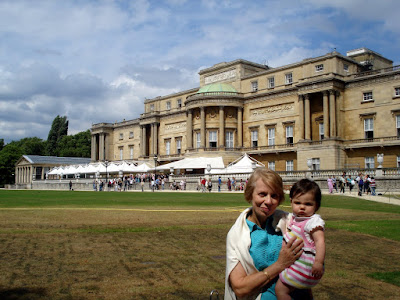 Mrs. Jim has just experienced one of the most enjoyable times of her life. Now she is home.

From July 13 until August 3 she was with our youngest grandchild, KP, for every day. Some of those pictures have already been posted. You can scroll down.

Pictured on the right she and KP have been visiting Buckingham Palace. There are now times of the year it is opened for public tours.

KP is now one year old and is completely enjoyable. KP came to live in London with her Mom, Dad, and BP. Their stay will be at least for two years if thing go according to plan. We will miss all of them.

Mrs. Jim had a six week absence. All but thirteen (13) days were spent in London, U.K. Two days were in Copenhagen, Denmark, and eleven days on the Star Princess cruising in the Baltic Sea. I came home earlier, on July 20.

Relating to homecoming, my current post on my other blog is a little haiku poem about a sad homecoming (link).