.
It's been hot here in Texas 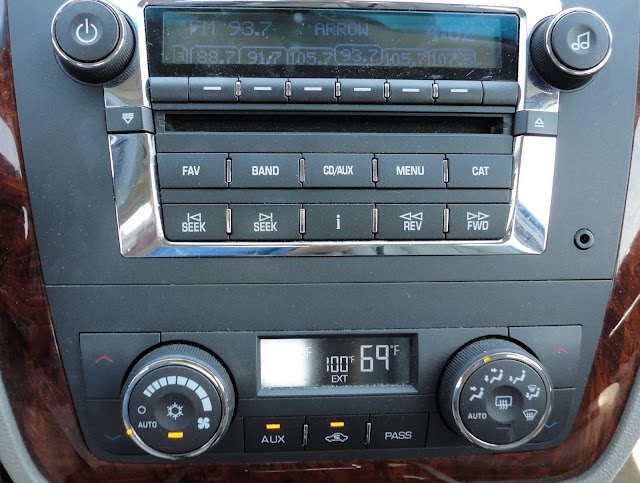 Coming back from Iowa the first week of June our car thermometer registered 100°F as soon as we hit Texas.

Besides that we are in the middle of a bad drought. Crops have died, lakes are empty, our forests are burning, and we have a state-wide burn ban. The latter means there were very few 4th of July fireworks. Our usually nice fireworks display got cancelled for this year.

.
Before you start reading this I would like to see a wonderful tribute to the United States July Fourth holiday from blogging friend, Terry, of Canada. (link to Terry's blog) She used our pets, Adi, Katrin, and Amber in her patriotic post.
[You can click on a picture for larger sized view] 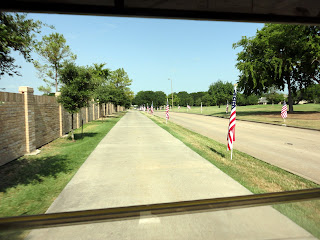 Mrs. Jim and I are driving down our street, staying on the golf cart 'sidewalk.' We are headed for our annual subdivision golf cart parade.

In 2007 Mrs. Jim, Bailey, and Adi participated in the parade (link). This year we would observe from a neighbor's front yard. They live on the parade route, we don't.

Our subdivision is approaching the 1000 home number so that would make easily 2500 residents. We have two golf courses with houses along the courses. There is also a 'prestige course' across the street for people who pay big $$$$Bucks for a higher class membership. 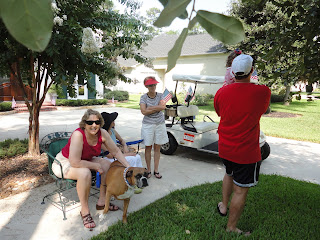 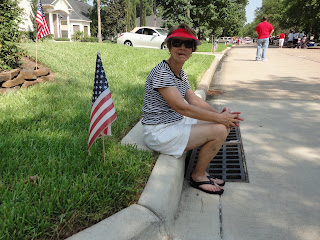 We parked our cart in the driveway and chatted with our friends until the parade started. Up front you see Triva and Molly (brown dog), owners of the home.

Mrs. Jim found us an upfront seat so we could be up close there on the curb. I was sitting above the storm grating so the candy coming my way mostly found its way into the storm drain. 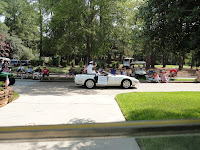 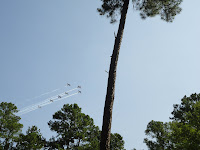 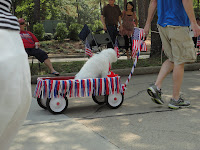 Like I mentioned it was a golf cart parade. But not all came via their golf carts. We had other paraders as well. Here we see a service man on leave riding in a white convertible, six planes (I think there were seven before they did the missing man maneuver) and dogs being pulled in the red, white, and blue decorated coaster wagon. 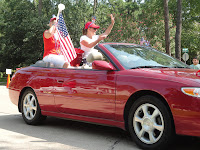 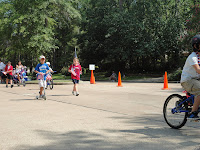 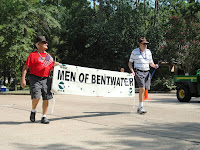 Next we had a red convertible. No sign or anything, I have no idea of WHY they were allowed to ride along with the group. The walkers and bikers ranged from kids to old men. The old men here were recruiting for the MOB. I haven't belonged for a couple of years. They mostly eat, drink, and have speakers. 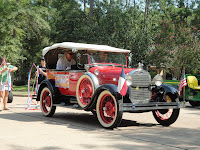 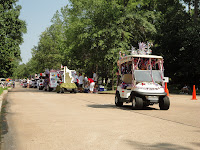 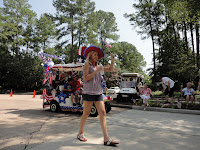 We see here a Model A Ford Phaeton fiberglass replica. It might be the real thing but I don't know the owner to ask. There were a couple of older cars to come. Just to show you, there were a lot of golf carts. And of course we had pretty girls walking and riding. 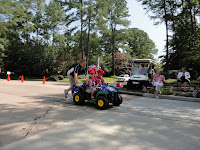 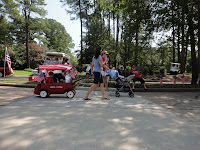 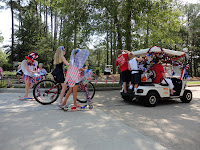 Kids, kids, and more kids. First you see a couple being pushed in their toy John Deere Gator by an older fellow, likely a brother. Several were little and were entirely pulled or pushed and guided by a parent. Last here was the only foot propelled scooter I saw. 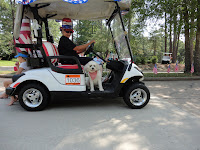 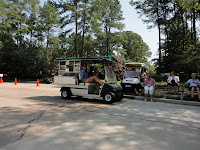 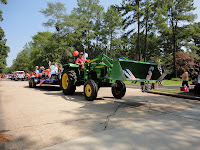 Not all dogs rode in wagons. The two ladies in the beverage cart were doing double duty. Ice was free and it was the food and beverage department's entry, sans sign. A parade is not a parade without a John Deere green tractor. We were not deprived. 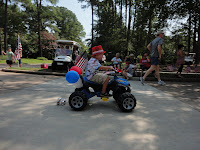 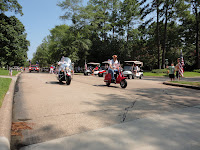 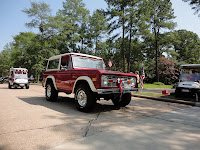 This guy was riding a 4-wheeler. It looks small, perhaps pint sized? We had one motorcycle and this antique (1950's) Cushman motorscooter. I had a friend who worked at the Cushman Motor Works in Lincoln, Nebraska, back in my pre-Army days. Last here is this late 70's to mid 80's Ford Bronco. It was restored to original condition fairly nicely. 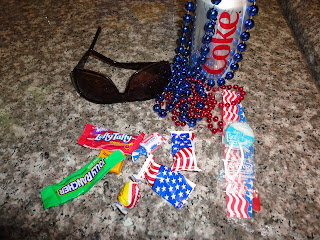 When we got home Mrs. Jim put our 'loot' on the counter. Note that all of the Tootsie Roll candy had been eaten. Old folks like those but kids spurn them.

After the parade we cooled off a bit and left to pick the ripened figs from our friend's two fig trees. Jack was on vacation in Colorado in the cool, visiting his daughter who also came from the warm (Atlanta area).

We picked about forty quarts. Mrs. Jim put some up into fig preserves and gave about a third of them away. They sure do cook down. She had seven mid sized jars. I may post about that later, with pictures.

Then we cooled it for the afternoon. We watched a Poirot (Agatha Christie) video I had checked out from our library. There were nine videos in this set, Part I of three parts. Mrs. Jim cooked barbecued brisket for an early evening meal.

That evening we were supposed to have a fireworks show but due to the county-wide burn ban our POA decided to postpone the fireworks. Instead we had a nice laser show. I had seen better laser shows but this was fine in a pinch. Houston decided to go ahead and have theirs. It is always nice and is shown on TV real time.

That was our July 4 celebrating for 2011 on the 4th. We had several other celebrations earlier. A Sunday school party, the Conroe Symphony, and our church's musical production. These I can remember to tell here.

Not your typical 'fly on the wall.'

Oh what he seemed to Hilda. He WAS of the Order Diptera.

Written for Succinctly Yours – Week 15
The 'expedient' prompt word which I did not use and the picture were selected by Grandma.
It's posted on her blog, Grandma's Goulash
Her Rules: Use the photo as inspiration for a story of 140 characters OR 140 words. It doesn’t have to be exactly 140, just not more.