.
"B" is for BACKYARD today. I have pictures of five backyard scenes. The top two are ours. The bottom three will remain anonymous concerning their owners. You can click on any picture for a larger view. Click it again and it will be larger still. 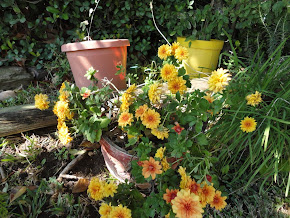 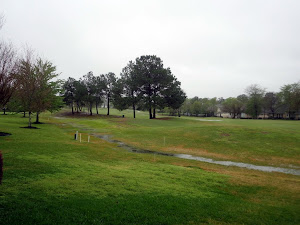 Our backyard stops on the left at the middle white stake and at the back where you see the water running after a rain.  The right side is bounded by this 'flower bed.'  This pot was moved during cold weather to over here where it had a lesser chance of frost.  We didn't plan to leave them there forever but we are going on three years now. 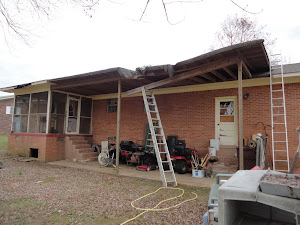 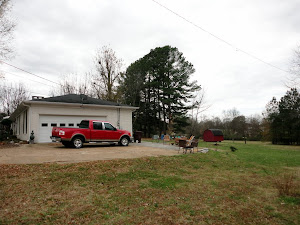 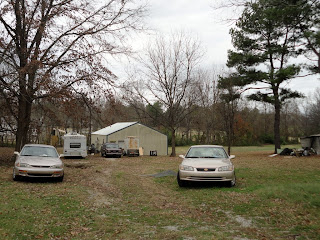 The house on the left, taken from its backyard, had a tree fall on the roof which caused this damage.  A strong wind blew the tree over so this picture is showing the repair at the beginning stage.
.
This is one of the  prettier Ford F150 trucks I have seen lately.  It sits every night here in the owner's backyard.  I would make room for it in the garage if it were mine.
.
Either of these cars would be for sale if you made a decent offer to the owner.  The camper is not for sale nor is the truck parked beside the trailer.  You might could borrow these two for a weekend fishing or camping trip.
.
Check out more Alphabe-Thursday 'B' assignments with Miss Jenny at the head of the class. You can find her here.  You might even like to join us as we go through the alphabet, one letter per week. 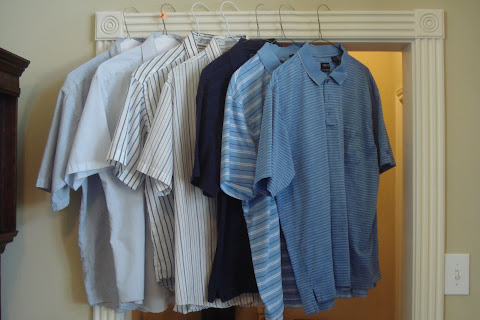 Thought I'd show you my favorite BLUE shirts for being every day or casual. On the left are my old work shirts and right are golf shirts. On the golf shirts, I have other favorites but they weren't blue. The work shirts are my former work shirts when I was teaching.

I played golf this Tuesday for the first time in thirteen months.  My total knee replacement surgery was last July 18.  I have not been cleared for golf by my doctor but he said to go see my therapist or golf pro.  Neither of them was very helpful, no more helpful than my doctor who is a sports medicine orthopedic physician.
..
So I went on the Internet and read up on how to play golf after a left knee replacement.  Mostly do not twist the leg.  The trick to not doing that is to stand with the weight on my toes when I hit the ball.  So I did that with my left foot and it worked good.
.
.I had a par on two par four holes.  Those were the only two holes for which I turned in a score.

.
I found these little fellows ALL IN A ROW sitting in the corner during one of my travels. It was on January 1, 2012 so the picture tells me. BUT, I have no idea of where I was. I do know that I was recovering from my back surgery then.(link) It may have been on the way to or from a rehab session. 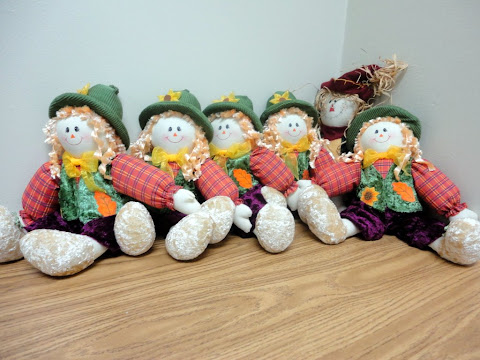 My Two Questions for this week:
.
1. What or who  is 'out of place' in the picture?
...Hint:  Look in the corner.
.
2. Do you ever feel 'out of place? '
. .
I used to drive up on the shoulder to the Galveston Ferry when I was riding my motorcycle.  I always felt out of place as I was passing all the cars in line waiting.  The boat operators always motioned the motorcycle riders waiting at the front of the line to come on after the cars had filled their places.

.
Bonus Question:  When you give someone special help or attention do you worry that he or she might feel 'out of place?'

Our Hero Is not with Us Today -- Memorial Day 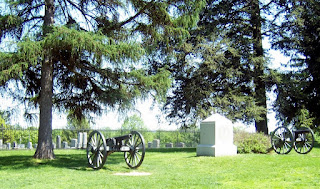 He was in love with life.
.
He finished his school, he
lied about his age, and he enlisted.
Enlisted in the U.S. Army Air Corp.
Became a soldier, he did.
.
Flight school was a dream,
learning to soar, learning to
fight, and best of all, learning
to fly. Fly his P-38 he did,
.
He wrote his mother,
who was expecting.
A new sister for him in January.
.
He wrote his father.
He was so proud of what
the Air Corp had made him.
Trained him to fly, trained him
to follow orders, they did.
.
He took his plane, the P-38,
to Italy to help fight the war.
.
We don't know what he did from there.
We imagine escorting bombers,
we imagine shooting his enemies down.
We imagine Eugene Jr. was loving his life.
He was so brave.
.
We don't know how it happened
but we know on a December day
he was shot down along with his plane.
A priest had found him and retrieved
his dog tag.  Then he covered him
with his chute.  Junior had lost his life.
.
We know the German soldiers came.
They buried him by the church.
.
After the war he was moved
to New Orleans and buried
there with his kin.
.
After the war, there was no life for him.
A sister for him was born
in the month after he died.
Life goes on, for one or another.

Prompt, 'in love with life,' was suggested by Laura at  Shine the Divine
Find more poems using 'in love with life' as prompt words
at One One Single Impression
Note:
... Mrs. Jim is the 'sister' in this poem, a sister very proud of her brother.  She never knew him except from what she was told and from what she gained from his few letters.  Mrs. Jim wore a red poppy flower to church yesterday.  She wore it for Junior. We are flying our flag for him today.

Clearly Croc has done blogged too long! HTML! Which door is out?

Rank has its privileges they had told him. What they did not tell is that he has NO rank.

Why are all these people saluting me?


°Written for Succinctly Yours – Week 62
°The word of the week, 'privilege', and the picture (donated by Pat and Jerry) were selected by Grandma.
°It's posted on her blog, Grandma's Goulash
°Her Rules: Use the photo as inspiration for a story of 140 characters OR 140 words. It doesn’t have to be exactly 140, just not more.
°Using the word of the week is not required. This week I elected not to use it in the first story.  It is used in the second.