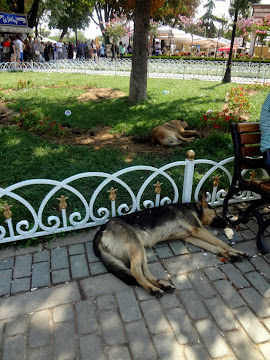 I loved Twain's "Dogs of Constantinople"
"... dogs," he said, "I feel them everywhere ..."  We did too!!
Twain felt sorry for them in a way and admired them in another way.  He told of a Sultan who once tried to kill them all off.  That was unpopular so his efforts to rid Constantinople of the stray dogs failed.
Another time he tried to ship them all to an island.  Not a problem there until it came back that the dogs never reached the island.  Somehow they all "fell" overboard on their way.  Sounds like in our 'old' Army when a footlocker falls on a belligerent trooper or he falls down the stairs. 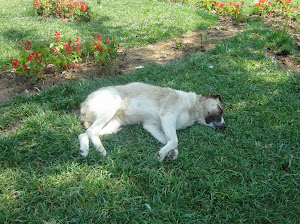 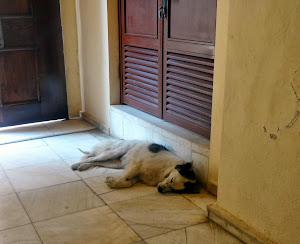 The dogs were laying all over Istanbul, on the sidewalks and, like the two above, in the grass.  I have copied Twain's Chapter 22 of my old 50¢ find on eBay (link to my post about that), Traveling with the Innocents Abroad; Mark Twain's Original Reports from Europe and the Holy Land.  Read it here if you wish. 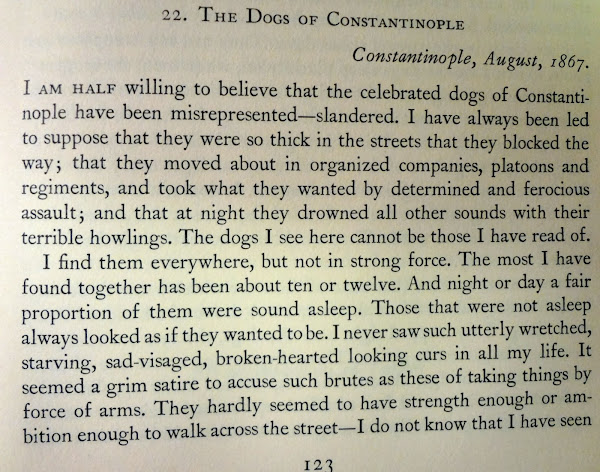 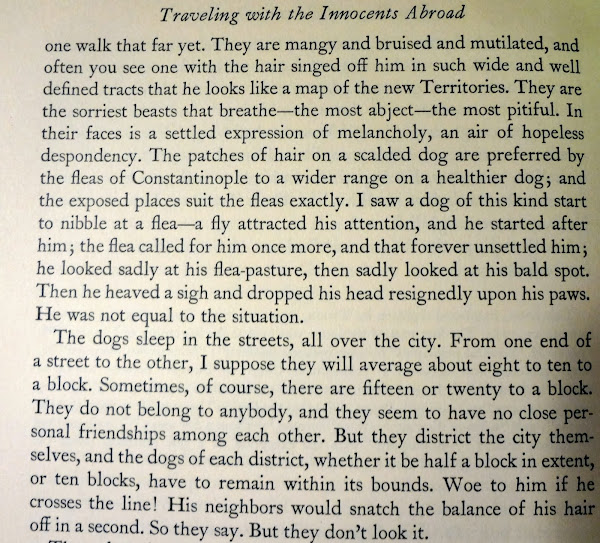 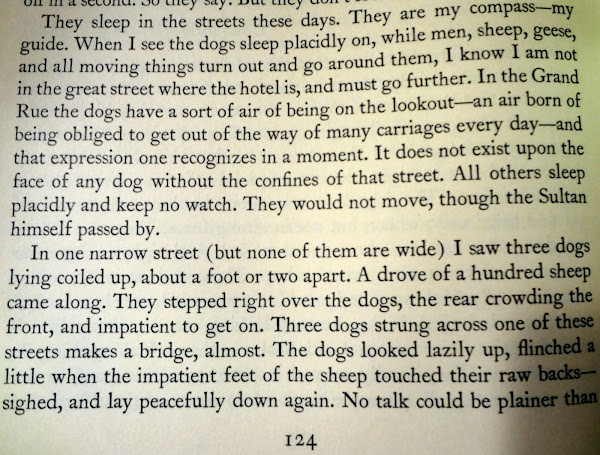 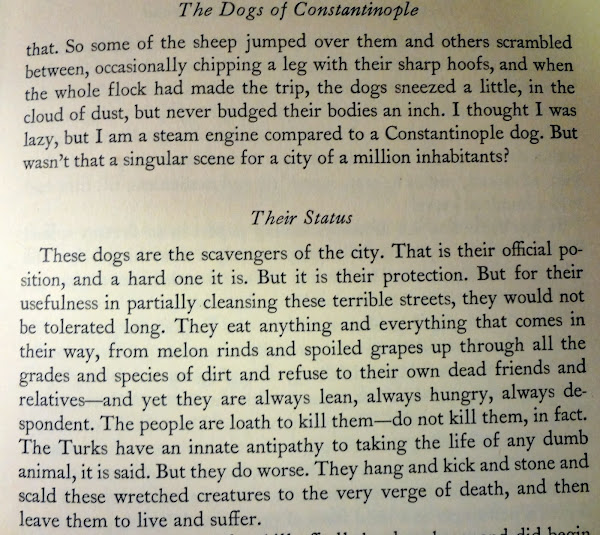 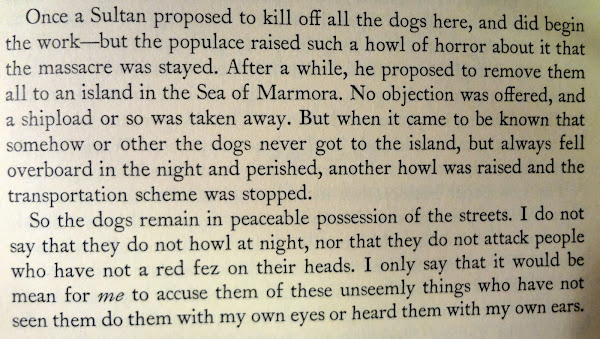 Describe your life (or something) in a phrase using just six words for Six Word Saturday. Click the box at right (or here) to visit Cate's blog with Mr. Linky showing all the other blogs participating this week. Cate is the boss at Six Word Saturday. She would like for you to participate. 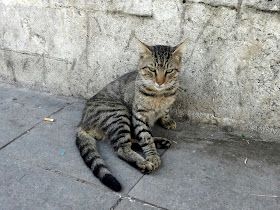 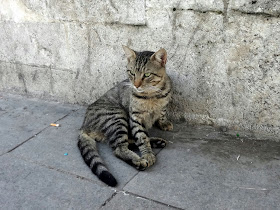 One:  Feline Friday's Turkish cat is a fine specimen from Istanbul. Turkish cats are of two breeds, Turkish Van (link) and Turkish Angora (link), both long haired cats.  This one is a Tabby cat and is not of Turkish original ancestry by breed.  He probably is a street cat but he was very tame. 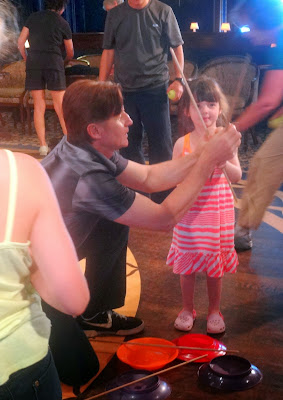 Two: Next after leaving Split, Croatia, we had two days at sea. Mrs. Jim, KP, and I went to the cruise juggler/magician's (The Juggler's) class on juggling on one of our afternoons. KP learned how to spin a plate on the end of a stick while Mrs. Jim learned to juggle three balls.

One morning at breakfast in the upstairs buffet KP and I noticed The Juggler sitting by himself on the east side dining area by a large sea side window. We talked with him a little and then he asked us to sit and eat with him. That made KP very happy as he was one of her favorites on board. And it was mutual, The Juggler was taken in by KP and her talents.
.
.
. 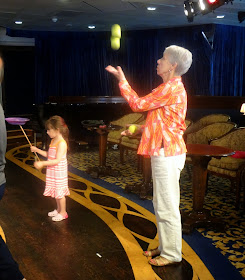 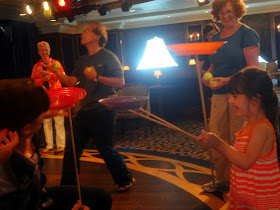 Three: Our next stop would be Istanbul, Turkey. Istanbul is located on both sides of the Bosphorus strait. Most of the Old Town, Istanbul is on the southeast side of the strait but there is plenty on the northwest side also.  That, towards the south end was where this summer's demonstrations were held. 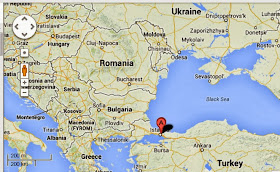 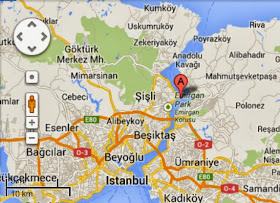 Four:  We spent two days in Istanbul.  The first day in the morning we went to the Hagia Sophia Museum.  At one time it had been a Greek Orthodox church and later a Roman Catholic church.   Then from May 29, 1453, until 1931 it became a mosque. It was then secularized and opened as a museum on 1 February 1935 and has remained the Hagia Sophia Museum since (link). 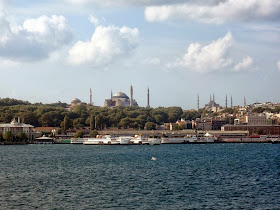 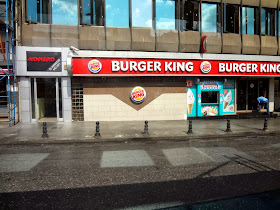 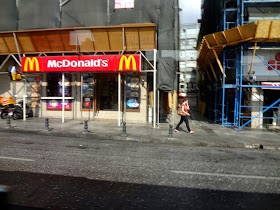 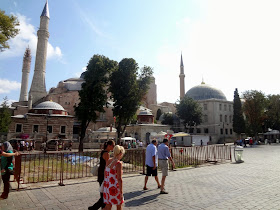 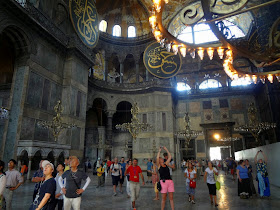 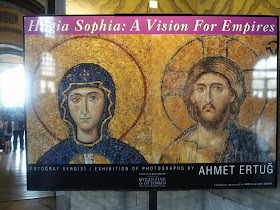 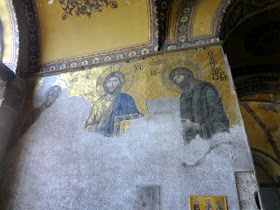 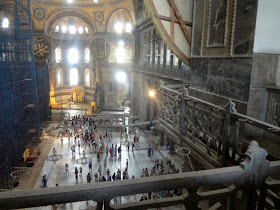 Five: Later next on our morning adventure was a self guided tour of the Blue Mosque.  For that the ladies needed covering and both men and women needed to have their knees covered.  There were bins of clothing so we could accommodate these religious wishes of respect. 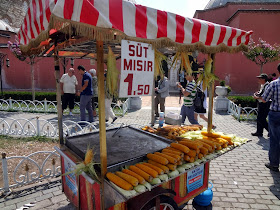 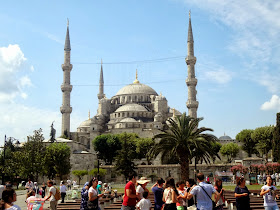 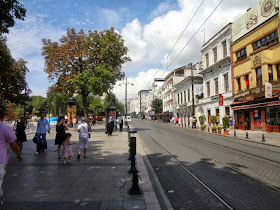 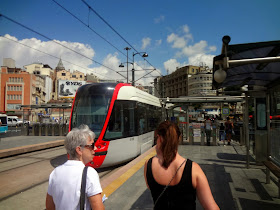 We made it fine back to the ship by taking the tram.  After lunch we would visit two Turkish castles and take a Bosphorus Strait cruise though Istanbul.  I will post about those next week if not sooner.
For Saturday, tomorrow's post, I will show some of the "Dogs of Istanbul." That will be with shades of Mark Twain's book, "Traveling with Innocents Abroad."
Fine print stuff:
==> I'm linked with Steve's Burnt Food for this today, go see his cat.
He and others have a Mr. Linky going there so you can see other cats too.
.
==> I am also linked up today with Nancy at A Rural Journal. She conducts her "A Random Five" blog hop there. Click that link to read other "A Random Five" posts or to join in with your own.

==> Click on any picture for a larger size and a better view.

Eddy finally made it to the top dock. Fear of ladders would not stop him now.

Turning around to slide down he saw six other kids climbing up.

- Picture prompt and Word of the Week: dock were furnished by GMa -
- GMa's Succinctly Yours Week 131 has links to other posts and gives the rules -
- Rules: Use the photo as inspiration for a story. Maximum of 140 characters OR 140 words -