Just about depleted my bulb stash 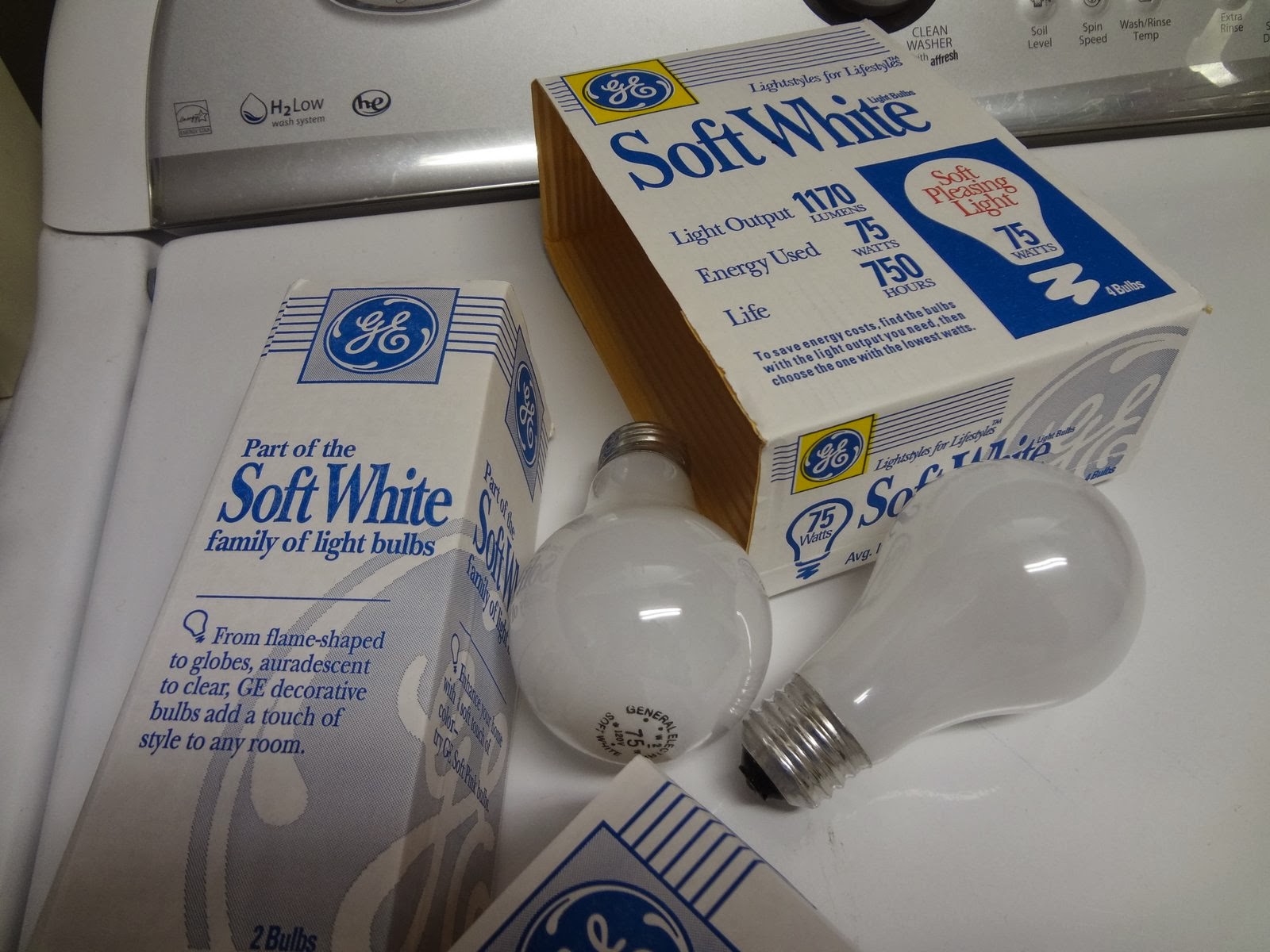 In the U.S. we have declared these items off limits.  It started last year with 100 watt incandescent bulbs and now we have added 75's, 60,s, and some smaller wattages.  I stocked up good on 75's last year but already am running low on 60's.  Oh well, I'll just smuggle some in from Mexico next fall when I come back from a golfing holiday.  I had to replace two of these 75's yesterday.
- - - - - -
My other stash, stamps, doing better 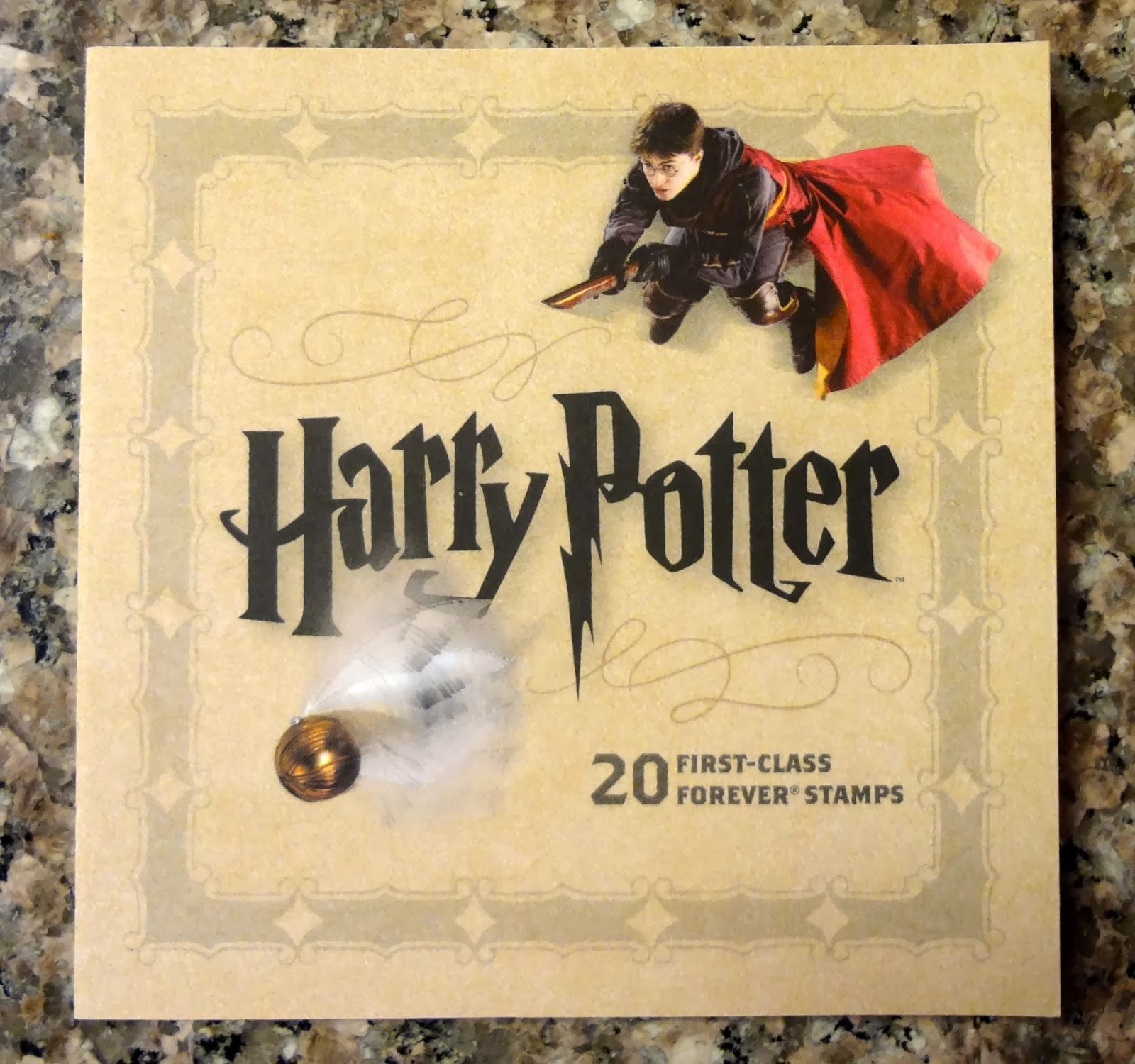 While I was adding to my "Forever" first class U.S. stamps I ran across these Harry Potter special issues at our P.O.  I got two, one for me and another for a white elephant Christmas gift next year.  Our postage has gone up three cents this year.  One cent increase is permanent and two cents are "temporary" until the U.S. Post Office has eliminated it deficit. 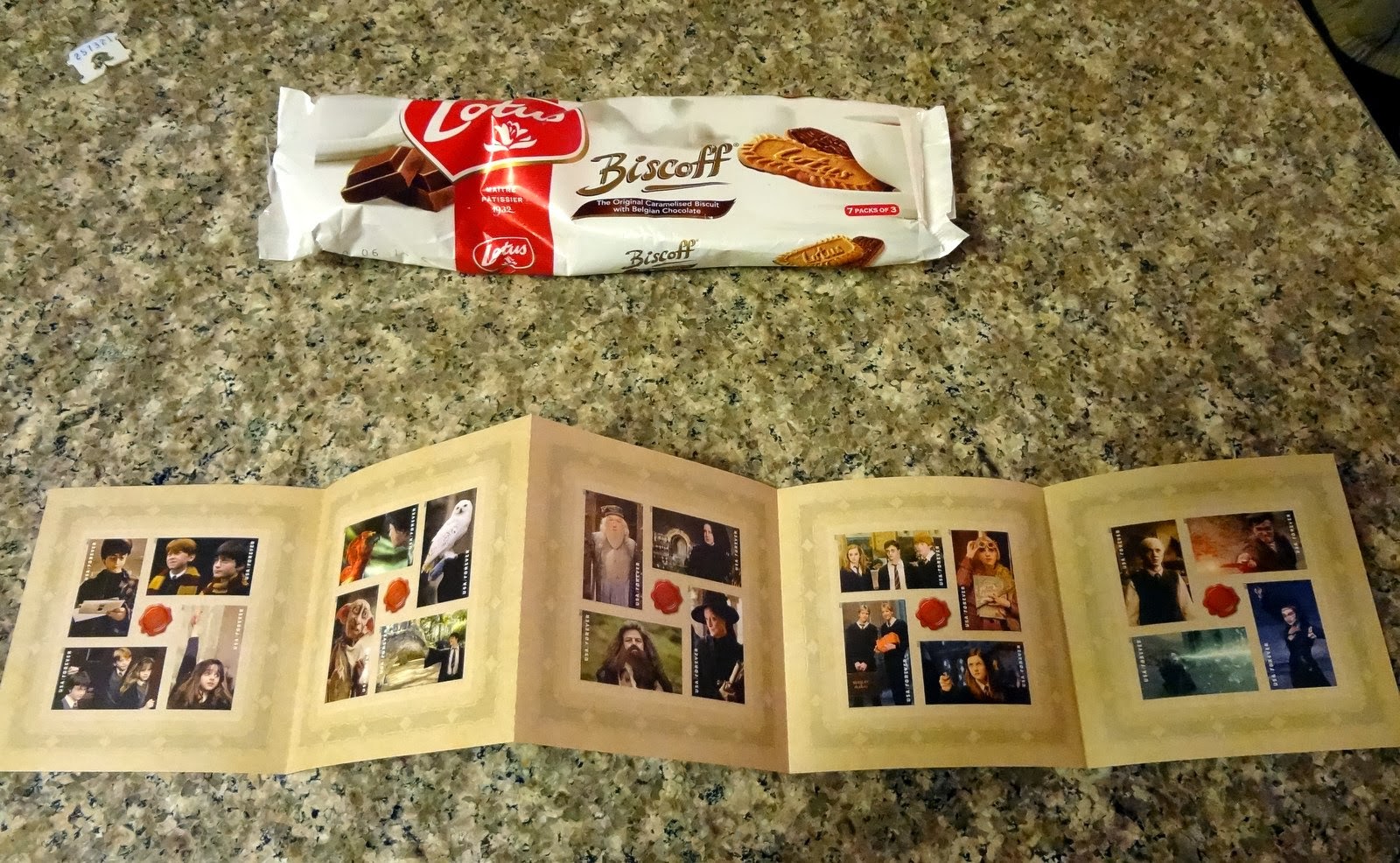 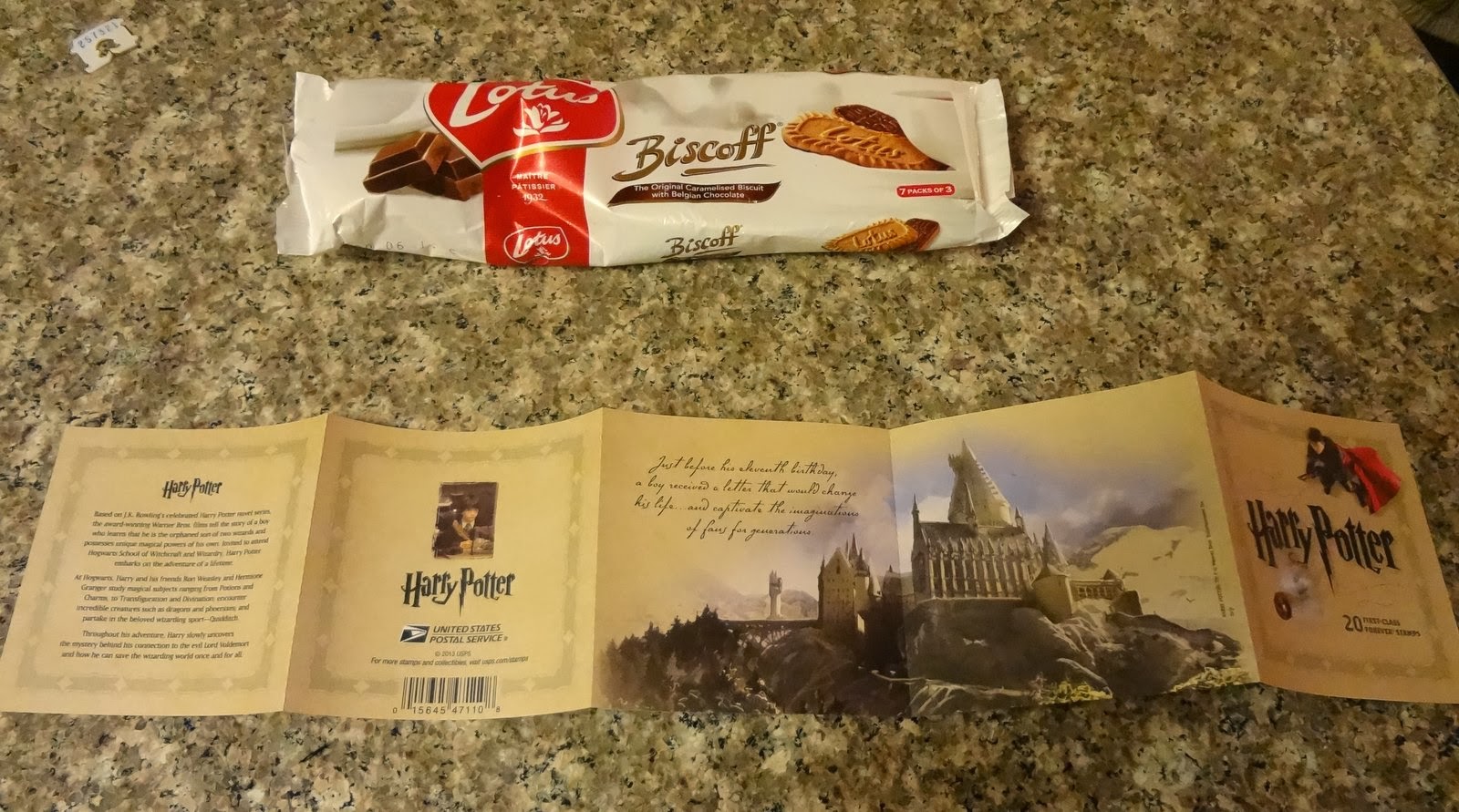 This cat reminds me of Farrah 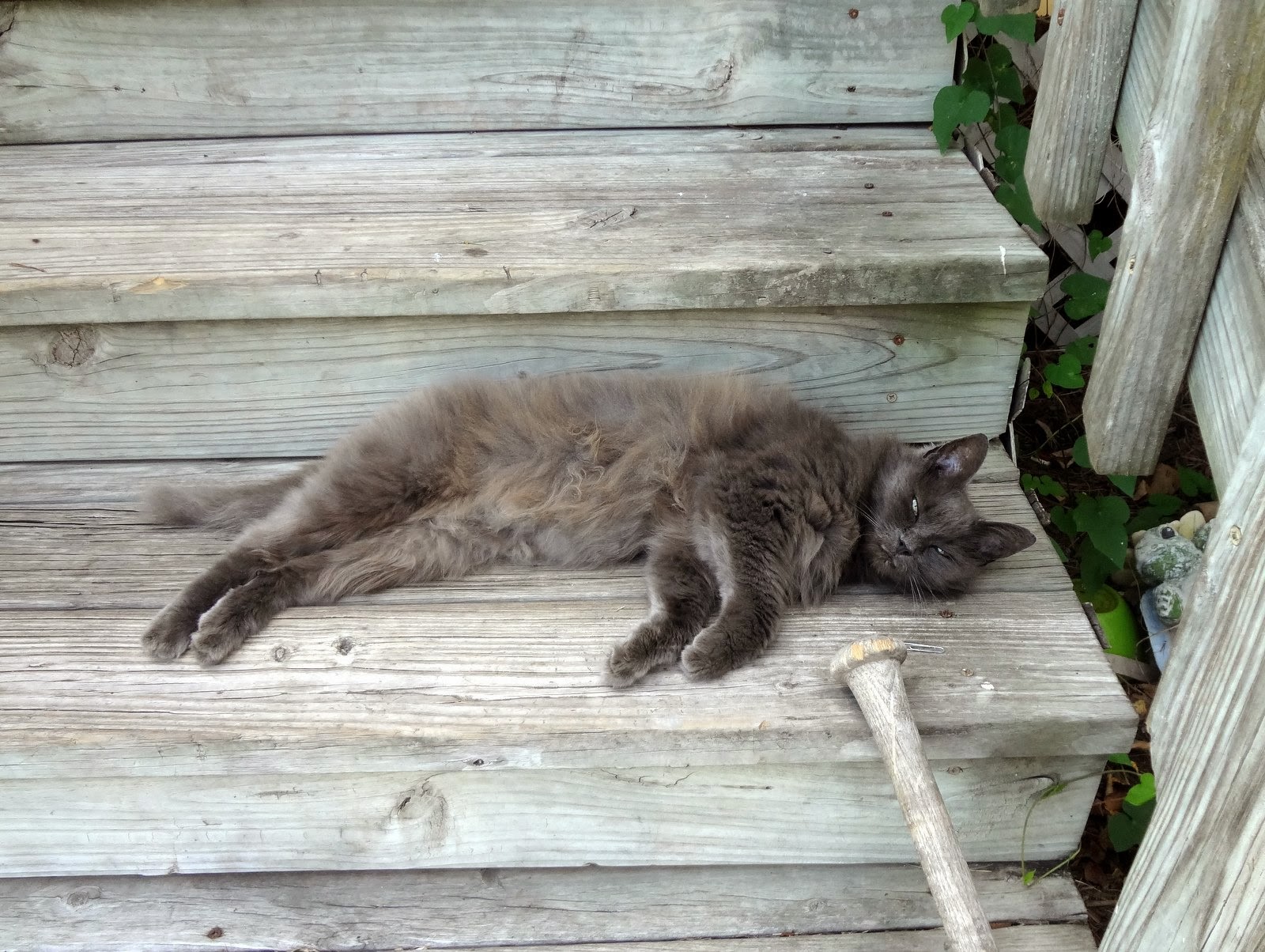 This cat almost always greets me when I pay our storage monthly rent.  She is very a very friendly "outside cat."  Our Farrah started as an inside cat but when still a kitten she wouldn't train to stay off (she climbed) Mrs. Jim's sheers she very quickly became an "outside cat."
She didn't seem to mind that and hung around our back yard and the little flower garden (one rose plus) beside the garage.  She died in her sleep at a ripe age, asleep in the garden under a bush.
Karen named her Farrah Fawcett Minou (French cat names link) after the American actress Fawcett lady (Farrah Fawcett Googled here ) because of her long pretty hair.  I found her in a basket in front of the Nassau Bay grocery store near my work at the JSC NASA Space Center.  A group of kids were having fun, sitting there giving away a litter of their kittens that day.
- - - - - - 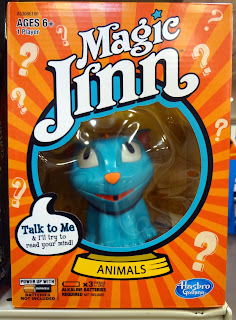 One:  I found this box of Magic Jim at the Kroger (grocery) store yesterday in the toy section.  Since it wasn't a food then I didn't buy it. 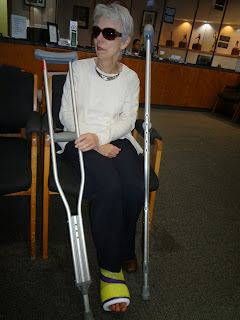 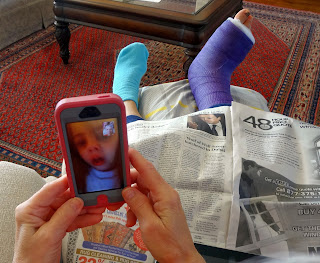 Two:  Mrs. Jim had bunion surgery on Jan 2, one day after her birthday.  It has been over three weeks now.  This cast went on at the end of the first week and it is scheduled to come off next week.
Her first calf rubbed her sutures the wrong way and so the PA put on a new one with more padding for her.  The first one was definitely an eye catcher being LSU purple and yellow.  The second is all purple except for the white on each end.
On the right wearing the purple cast, Mrs. Jim  is Face Timing with our youngest grand-daughter, KP.  They use Face Time more than Skype now, I don't know why. 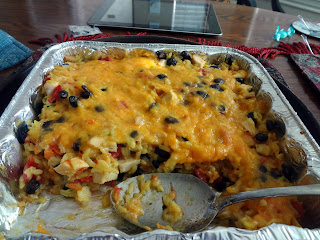 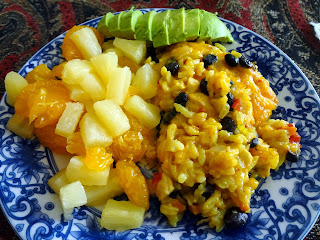 Three:  Mrs. Jim's Sunday school class has been so nice with furnishing us food.  It saves her from having to eat my food too.  This is a chicken casserole which made us four meals.  Above is a light meal, half the chicken casserole and half a fruit salad with sliced avocado. 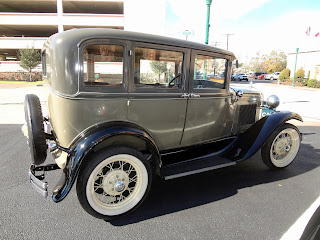 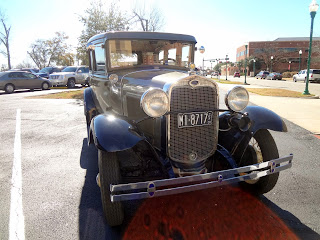 Four:  This is my friend's newest acquisition.  It is a 1929 restored Model A Ford 4door sedan.  He also has a 1937 restored Ford pickup and two Model T Fords.  Well, he did until today when he sold his 1917? Speedster (picture of a 1916 Speedster that looked like his).  My pictured of it here is from last Sunday when he drove it to church. 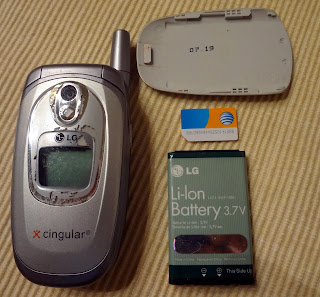 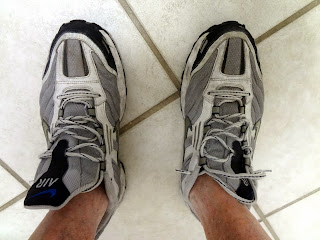 Five:  What do these two pictures have in common?  Loss of property.  The cell phone I put into a cup of coffee the other day.  I was in the car and forgot that the cup holder was not empty.

I had to wear the shoes because I had lost my slippers.  I found them today in the hall closet.  I had looked there several times but it turned out they were under a big jar of cheese balls.

And I bought a new AT&T Samsung flip phone for $14.99 at Radio Shack.  I just stuck my SIM card into the slot and it worked fine.  No camera though.  But the only pictures I ever took with the old one were an accident.  I went into Radio Shack the other day and they had told me that this was a  GO Phone and would not work as a regular one.  The fellow at the AT&T store told me they did work and he used to sell them at his place. 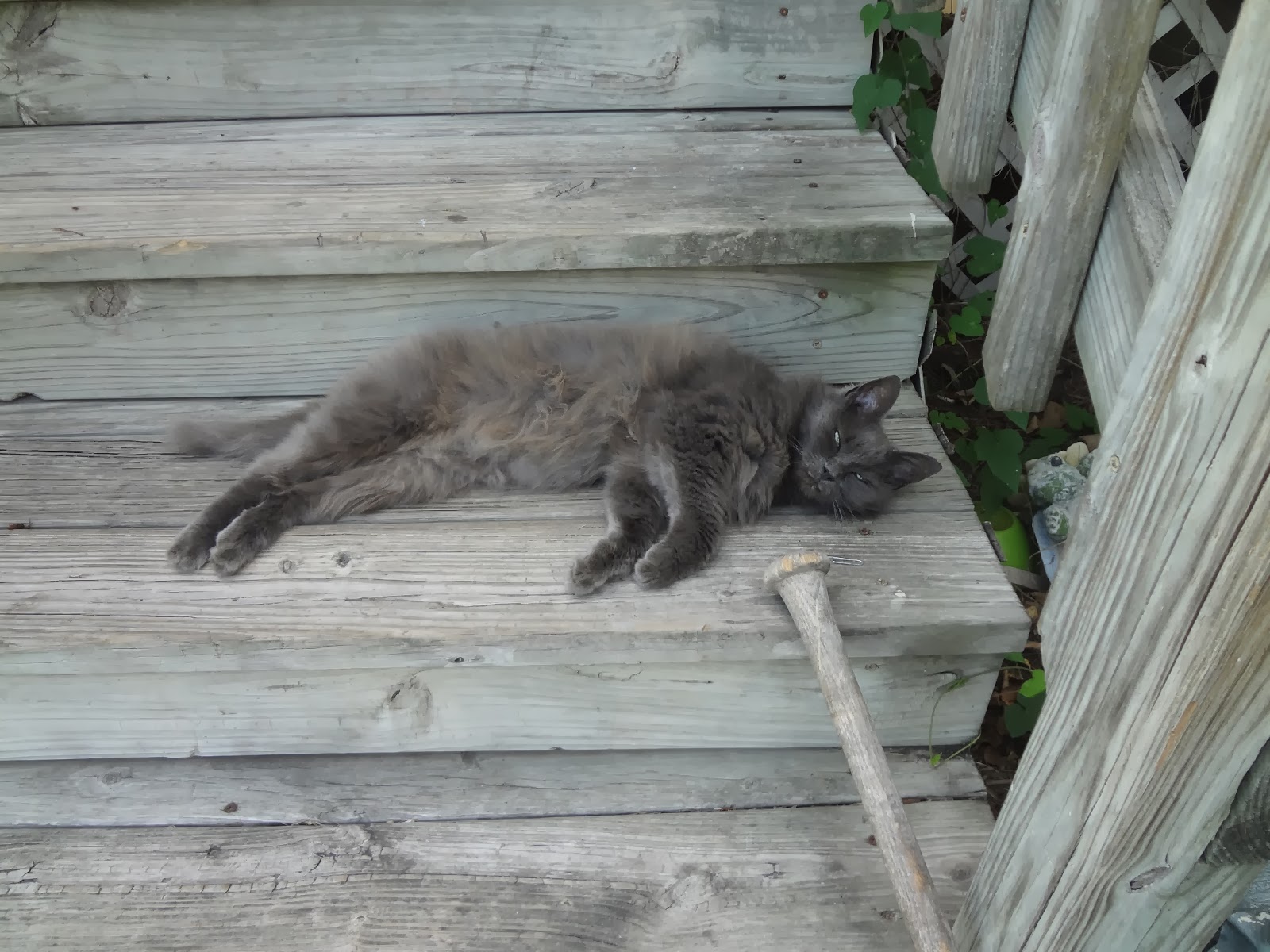 This cat meets me most every month when I come to pay my storage shed rent.  It is very friendly and always gets up when I come so that she can be petted.  I don't know it's name or breed.
Fine print stuff:
==> I am linked up today with Nancy at A Rural Journal. She conducts her "A Random Five" blog hop there. Click that link to read other "A Random Five" posts or to join in with your own.
==> I'm also linked with Steve's Burnt Food for this today, go see his cat.
He and others have a Mr. Linky going there so you can see other cats too.

Poppa McPotlic was quaking today. Junior P was to get a haircut but he rebelled.

- Picture prompt and Word of the Week, quake , were furnished by GMa -
- GMa's Succinctly Yours Week 148 has links to other posts and gives the rules -
- Rules: Use the photo as inspiration for a story. Maximum of 140 characters OR 140 words -