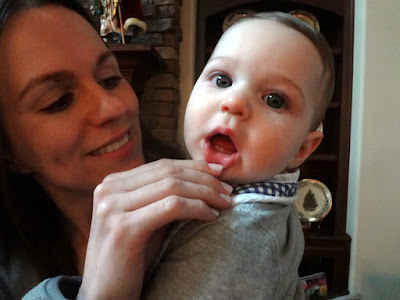 1. Week's Favorite ~~ JP, our great-grandson, and Mom and Dad, our oldest granddaughter and her husband, visited us January 2.  In the picture we get to see Mom showing off JP's new two front teeth.
[click on photos to enlarge] 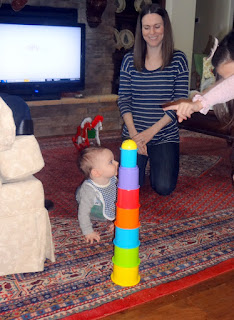 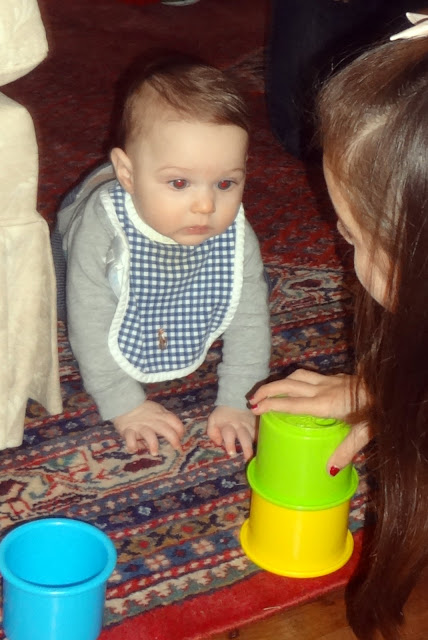 JP was given a lesson on demolition engineering by his cousin, KP.  JP is a fast learner as you can see. 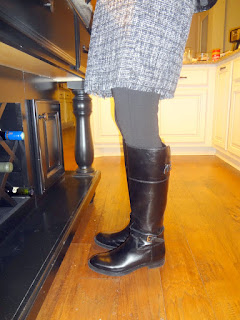 2. Starts with "B" for Boots.~~ If I was a girl I would wear tall black boots and very short skirts. That's the way I like my boots, for ladies.

Of course I can't change that, I'm way too old. I do have boots, two pair. I have my Army boots, very old now. I also have a nice pair of cowboy boots, a present from Mrs. Jim.

Trouble is that I can no longer wear boots, men's for sure. My podiatrist has me wearing athletic shoes with generic arch supports.

Wonder what I'd look like in a black pair of sandals?


3. (a) Outside ~~ Well, the first two pictures are 'outside' of our home.  I took these during the candle light portion of our church's Christmas Eve worship service. We had there services with nice attendance at them all. ?
. 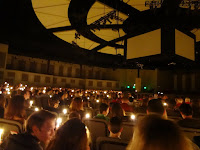 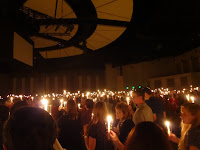 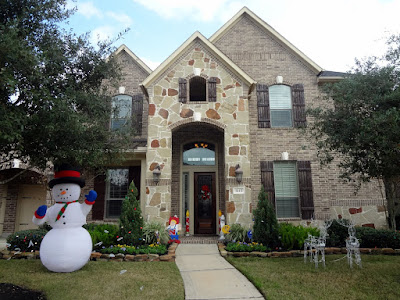 3(b). Outside ~~ These are outside of our home.  Also taken Christmas Eve Day.  [again, click on a picture for a larger size] 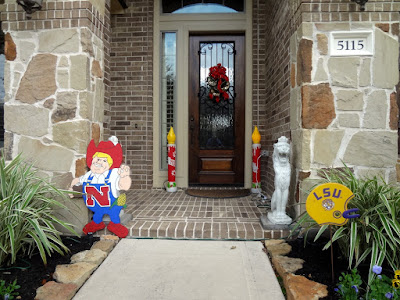 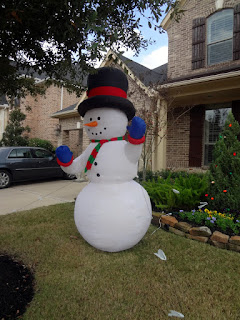 The fine print:  Teresa of Eden Hills is running this meme, Friday's Hunt. She has three alternatives for us to post about but this one, Alphabet series, will be the one I will try to follow and post about.  - Her rules are: "Welcome to the first linkup for Friday’s Hunt. It’s very simple. Anyone can participate. The link opens at 7pm Central time and will close Sunday at 7pm, so you have plenty of time to enter."
- The Mr. Linky address here has others who are participating if you would to read what these folk are doing for the Friday post
- For the week of January 8 our assignment was to post on any or all of these ideas: (1) Week's Favorite; (2) Starts with "B"; and (3) Outside. 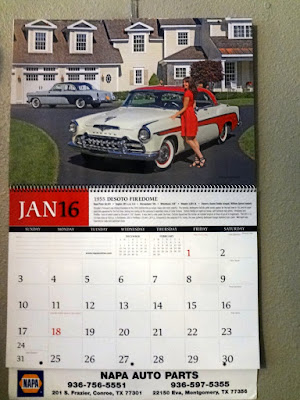 This is my NAPA Calendar for 2016. I have been collecting them since 1970's except for the first issue. The others are scattered a little after our recent move of 86 miles from the north side of Houston over to the west side.  We are now in Katy, Texas, instead of Montgomery, Texas, both Houston suburbs.

I generally get them about the first week in November.  I checked the local area NAPA Auto
Parts stores around here in the second week of December.  Either these stores were all out or they had not received any for 2016.

Yesterday we went back for an appointment with Mrs. Jim's doctor. On the way, through Montgomery, I stopped at my former NAPA store and they still had some left !!!  I felt so good about my 'FIND', it was like having a late Christmas present.  "Heart Warming"

The pictures are of two 1955 Desota cars. My favorite is the RED ONE.  You can read the specs and ownership information from the picture below. 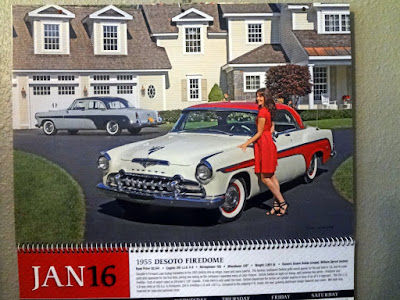 I have a little story about this model car. Back when I was a University of Nebraska college dropout I worked at a watch factory in Lincoln, Nebraska, the Elgin National Watch factory. I knew Dad would not be happy about my withdrawal from school, so I waited to tell him until after I had a job. Plus, as expected, not long afterwards he wanted his Ford pickup, fairly new, to come home. It soon did.

While working at the Elgin factory I became friends with one of the parts inspectors, named Bill, who was driving a race car.  The car was a modified stock class 1934 Ford three window coupe.  I spent a lot of time learning auto mechanics while working with them on the race car.  My first lesson was how to pull a transmission out of the car.  A few times I drove that car and then next one to follow, a 1937 Chevy Coupe, also modified stock.

The fine print:Warm Heart Wednesday for the week of January 6.  Click here, http://jennymatlock.blogspot.com/ , for links of others or for directions to join with a post of your own. There Ms. Jenny is our teacher. 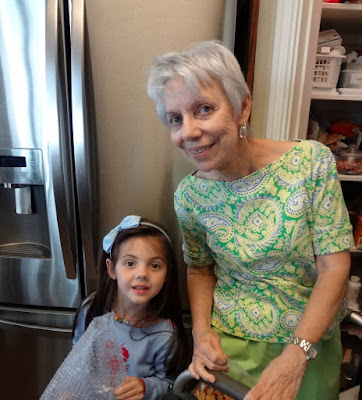 1.  Today is "National Thank God It's Monday Day" (so engage in Social Media to celebrate, i.e, post, then read something on-line).

3.  The picture of KP and Mrs. Jim was taken last year as they were just coming out of the pantry after looking for goodies to eat.  What do you think they found? (hint: KP loves chocolate) 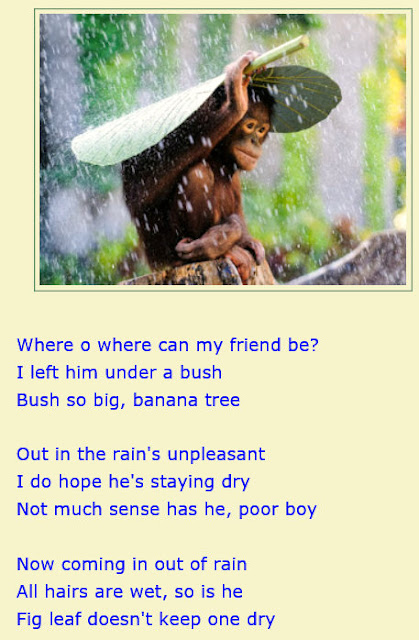 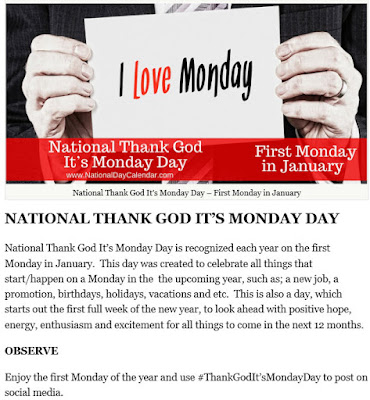 4.  Again today, it is also "National Spaghetti Day".  Eat some.  Make some (the January 2016 issue of Southern Living has some wonderful recipes).

Notes:
- a.  The National Day Calendar can be found by clicking here.
- b.  For the poem, the instructions were to write a poem in exactly 55 words.  Also, "... invited [us] to look back on the past year by viewing the winners of the National Geographic Photo Contest 2015. (Click HERE) The photos are offered as wallpaper, which may be downloaded free of charge. Please acknowledge the photographer on your site if you decide to use a picture from that source."
- c.  I'm linking with Sandee for her Awww Mondays post (Link).  I believe these two I caught coming out of the pantry will rate, although most are posting animals like puppies and kittens.  How about an orangutan then? Awww...