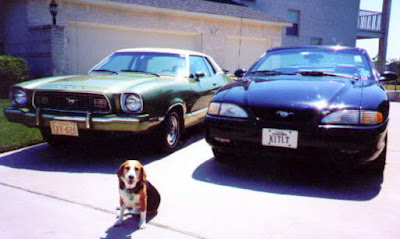 1. Starts with "M":  "M" is for Molehill or Missed pictures, take your pick.  This morning we went for a 50 Minute walk (another "M" word group) after walking our granddaughter to school. Sometimes we walk through the neighborhoods, other times we walk the trails in our green belt/flood control/runoff water retention area.

I didn't have my camera, surprise, surprise, I always carry it.  Passing over a pedestrian bridge we noticed below a fire ant hill (molehill?) that was three feet in diameter at it's base and about equally as high.  It was covered with grass that had been carefully trimmed with a weed eater.  I assume from that the fire ants are long gone.  I also missed a really would-be-nice birds on a wire shot. 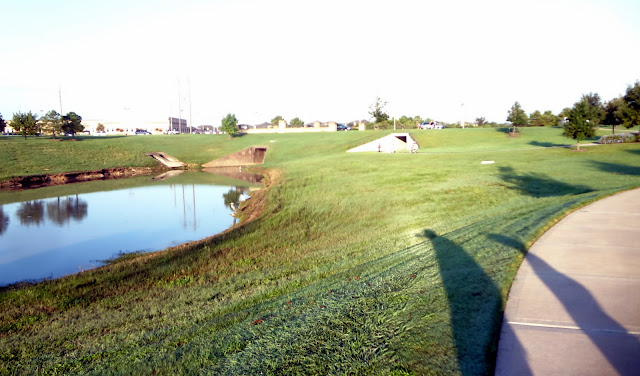 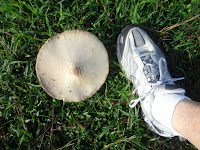 Pictured in the distance is the street leading to the school [click on a picture for larger sized viewing].  The pond has several white heron-like large birds fishing its banks.

The mushroom I found is typical of the Texas 'rooms that grow up between mowings.  It might make for some nice mushroom tea but I stay away from having wild mushrooms in my stomach.
Another nice blog post of pictures of our trails is this one, click here to see.

2. Week's Favorite :  Mrs. Jim made some Apple Galette using a recipe from her Christmas present Jaques Pépan cookbook.  We had another couple from our Sunday school class over for Texas 42 (played with dominoes).  It turned out really good for a first attempt (Mrs. Jim's rule, "Rule 103: never serve company any food you make for the first time from a new recipe." ) 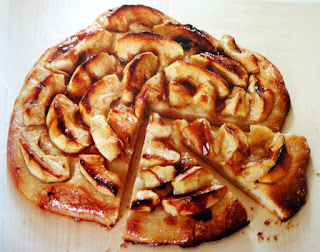 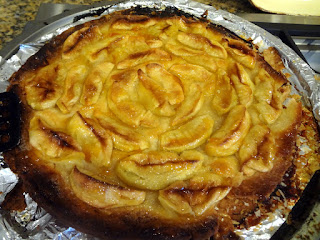 Mrs. Jim made hers using pie crust for a thinner, crispier crust; Jaques used pizza dough in his recipe for a chewy crust.  She would cover the edges with foil next time as it caramelized which she didn't want to happen.  Also she baked it on foil but that wasn't entirely good because it stuck in a few places.
[click on the recipe picture to the left ONCE or TWICE so that you can read it.]

3. Work -- I work every day, right now I am working on my 2015 Federal Income Tax Return. My work is all for no pay, I've been retired for quite a while now. My last job was as a business professor at San Jacinto College. Before that I was an Aerospace Engineer at NASA, the Jonson Manned Center Houston. 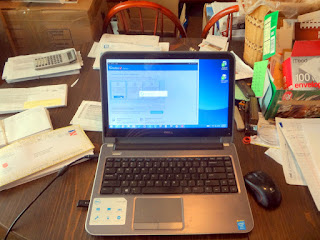 Note that my 'office' is useable again.  Not neat at all or still not very unpacked after the move but I'm in here!  I do wish I had a TV in with me but that will be after some more consideration of my choices (Off the Ethernet airways--i.e. broadcast, or cable, or the Internet).
_ _ _ _ _

The Fine Print:
- Teresa of Eden Hills, (click) is running this meme, Friday's Hunt.  Her rules are: "Welcome to linkup for Friday’s Hunt. It’s very simple. Anyone can participate. The link opens at 7pm Friday Central time and will close Sunday at 7pm."  You have plenty of time to enter as you can get the letter and the other two requested topics as early as Monday.  That is in her sidebar.
_ _ _ _

Oh yes, the top picture would be "M" for Mustangs.  I've used this picture before, Adi sitting in front of my Two Mustangs.  On the le left is Mom's 1974 Mustang II Ghia.  It has 76K miles on it and is pretty original, she didn't drive on snow.  It, a 2.8 Liter German V6 with a 4-speed console shift is loaded with accessories then available.

The other is my driving 1998 Mustang GT Convertible.  It is also loaded and was my retirement present for myself.  Belonging to a little young lady, in 2000 it had 49K miles, Now it has 106K but for a '98 it is still fast and quick. 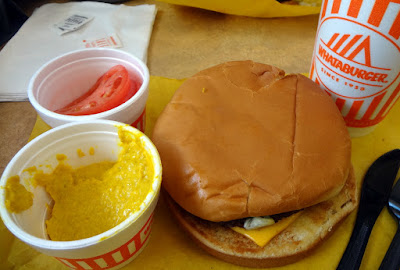 O Goodie, it's National Cheeseburger Day
I had mine for lunch, have you one today
Went to Whataburger
Senior drinks free, get urs
Not all give seniors free, some make us pay
_ _ _ _