(1) Starts with "J":  "J" is for "Jeeps I have known." Note the dog waiting in this one parked outside the grocery store.  I think he was hiding from me. 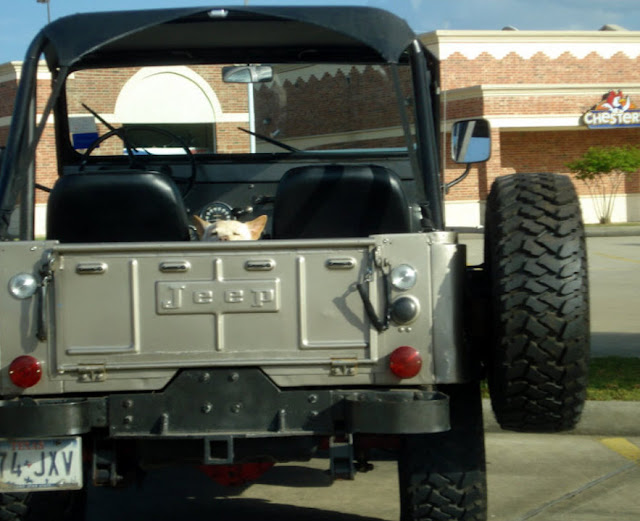 A local Jeep, parked in the grocery store lot in Conroe, Texas.  I wouldn't leave my dog unattended there in the back.  If you tried to take her she probably would have gone (she died in 2-13).  This one looks a little afraid but would probably go also.
I'm thinking the owner is fairly young, this looks like a young person's Jeep. 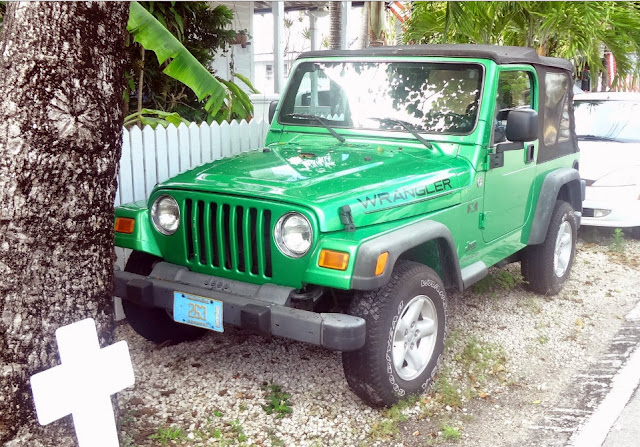 Parked outside a small bungalow in Key West, Florida.  We walked past this Jeep every morning but never saw anyone near it.  I'm thinking it belongs to a person who likes to take his Sunday car out in the Boone Docks Could be a lady, I'd guess in her early thirties. 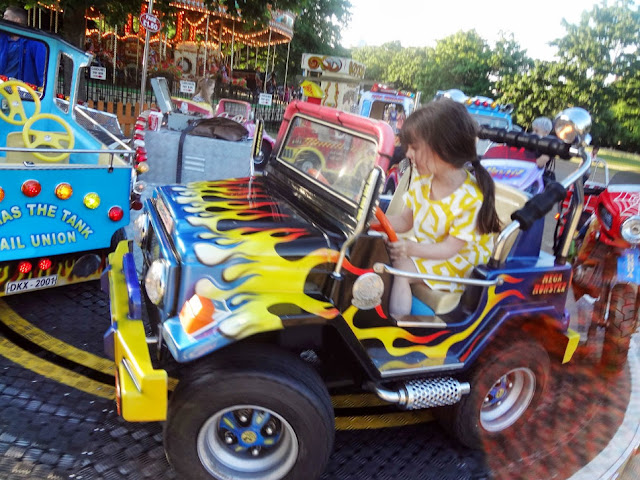 This is our granddaughter KP driving her rental Jeep find in Hyde Park, London, U.K.  She seemed to be going in circles.  Taken while we were visiting them as they lived in London.  They are home now. 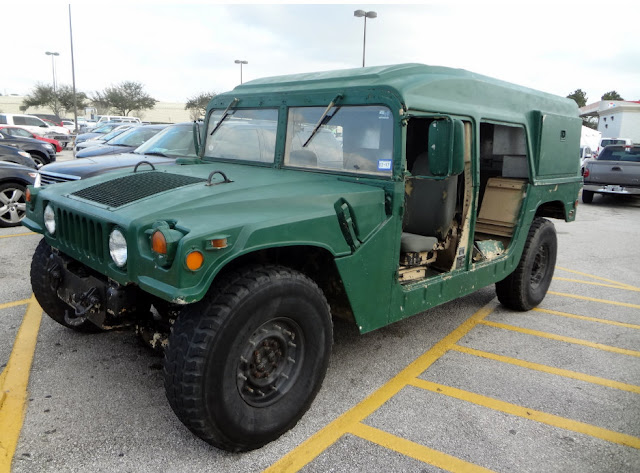 Another Jeep find in a grocery store parking lot.  This time here in Katy, Texas.  Tom thinks it may be a "Wanta be Jeep."  I didn't hang around waiting for the owner but I can imagine he also is in his early thirties and likes to drive in the muddy rice fields.  He may go rock climbing with it. 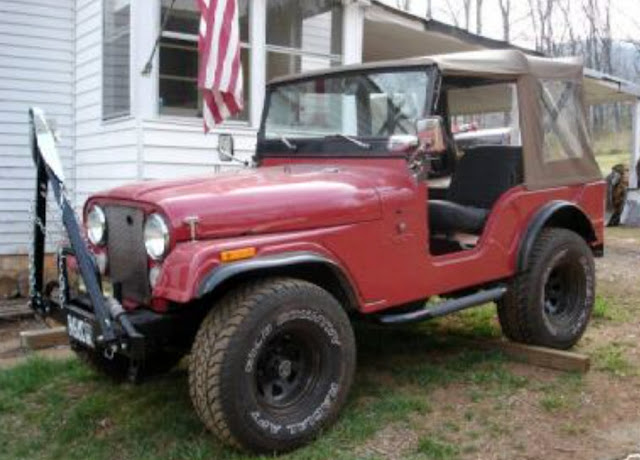 I don't know much about this Jeep or its owner.  But I was glad to find that I had blogged about it being a Red Jeep.  My son had a red one but sold it when he retired.  My younger Great-grandniece is getting married tomorrow.  When she was in high school she was wanting to get a Red Jeep but her father got her a Chevy Tahoe instead. 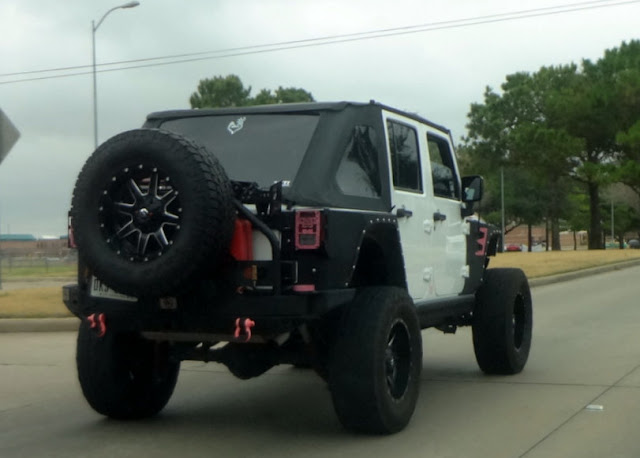 This white and pink Jeep was driven by a young lady her in town on Cinco Ranch Boulevard.  I couldn't quite ever get even with her (I was driving beside and behind her) so that I could get a really good picture.  Notice the pink decorations on the back.  There were more and larger pink items around the hood area and on the grill. 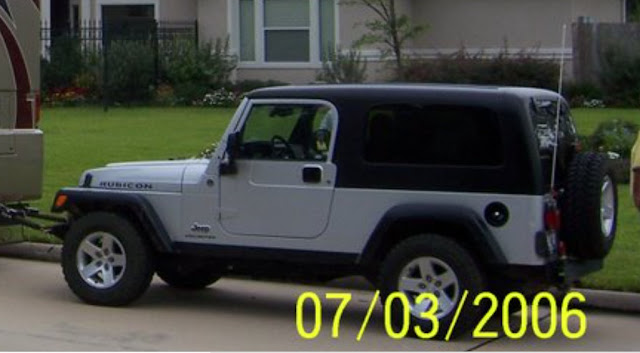 This nice looking, seemingly sedate, Jeep belonged to my friend.  I am not sure that he owns it any more.  It is the main piece of hardware when he and his son would go Jeeping.  He bought the RV so that he wouldn't have to stay overnight in town while on a Jeeping Weekend but rather could camp out with his son in the rock fields where they Jeeped. 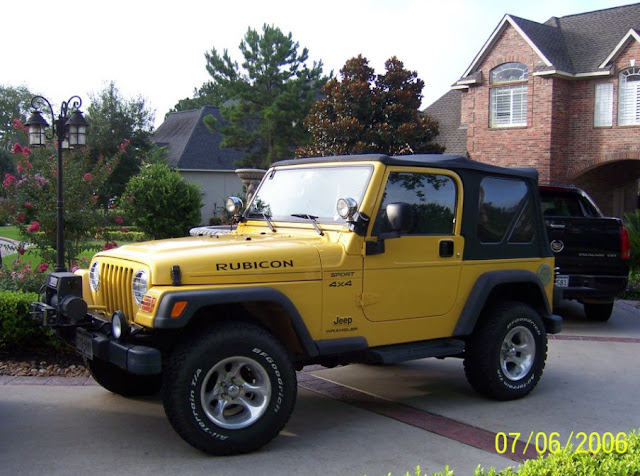 This0Yellow0Jeep I don't know much about.  It was in 2006 when I found it and took a picture.  I have no idea where I was then.  Maybe Quebec City, CA?  I did talk about liking it better than my son's Red Jeep (blog link).
All of the above Jeeps have been on my blogs.  Each one had its own story, often behind that story is another story I haven't told.  Someday, I might ...
(2) Week's Favorite: When we got back from our South American cruise (L.A. around Cape Horn and up to Rio de Janeiro) my Mustang, a 1998 GT Convertible, had cratered.  The battery was completely dead and would not start.
This week I jumpered it off my other Mustang, a 1974 Mustang II Ghia, to get it going.  Then without shutting it off I drove to Sam's and bought it a new battery, one with a three year warranty.  Below is the waiting room where I got caught up with comments owed, some from you guys reading this.  I hope I didn't miss anyone. 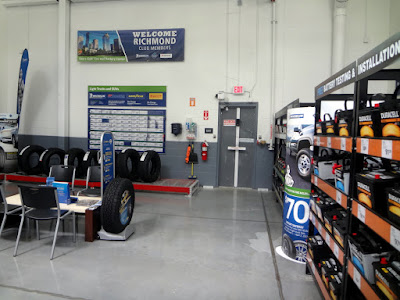 (3) Bird or wings: One burglar was shot dead.  The other escaped for today but he will be caught and become a jail bird. Two policemen were shot, one seriously, the other went home after spending a night in the hospital. 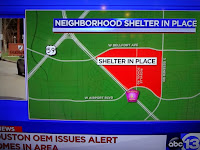 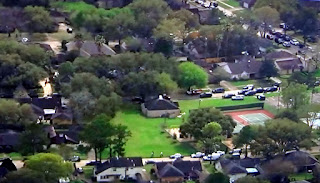 The Fine Print: - Teresa of Eden Hills, (click) is running this meme, Friday's Hunt.  Her rules are: "Welcome to linkup for Friday’s Hunt. It’s very simple. Anyone can participate. The link opens at 7pm Friday Central time and will close Sunday at 7pm."
http://www.inlinkz.com/new/view.php?id=702648