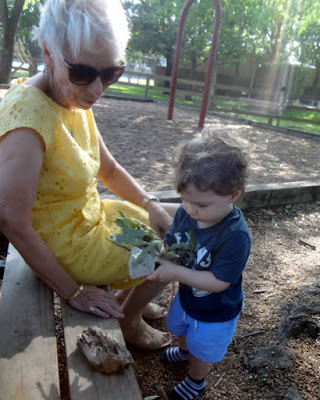 (1) Starts with "S":  "S" is for surprise, Lily of the Nile flowering.  A few weeks ago we planted this clump from our home in Montgomery and were really surprised to get a bloom already this week. 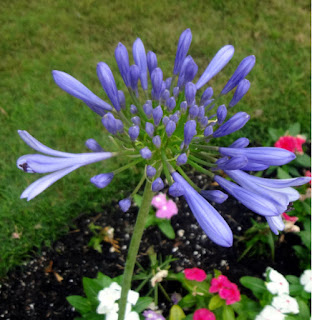 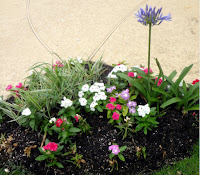 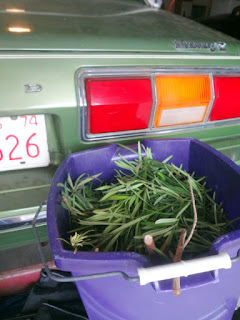 (2) Week's Favorite: I did a bit of Yew Tree trimming last Saturday and put the trimmings in this bucket until garbage day. It also surprised me when I got home to find out that the green color of the leaves matches the green color in my 1974 Ford Mustang II Ghia (link)(Grandma's Mustang, I have had it after Mom died in 1999.)

(3) Family:  Yesterday was Megan's (link) my oldest granddaughter's, birthday.  We celebrated at the Mexican Restaurant near her home.

JP, above with Mrs. Jim, belongs to her.  We met my grandson, Tim, a while before our meeting time and played in the local park.  'We' was JP, KP, Tim, Mrs. Jim, and I, who were playing.

JP seemed to be more interested in collecting sticks, rocks, and tree twigs having leaves than he was in playing on the swing.  He also likes picnic tables.

Here are a few pictures, starting with some of the wait staff singing Happy Birthday to Megan. 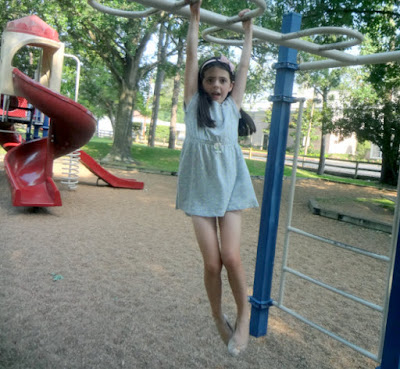 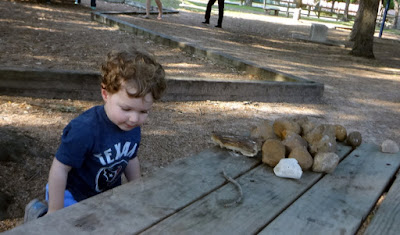 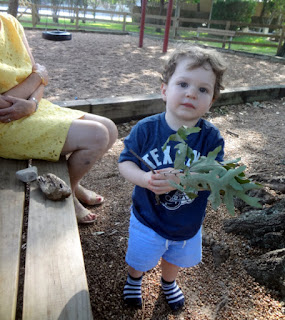 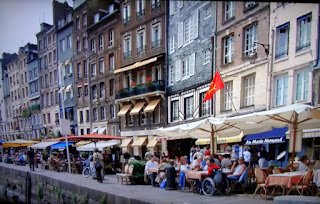 (3) Window: This picture below is of a row of mostly Hotels in Honfleur, France (link).

Last week I had said that I would tell more about our visit to this place next week, as it would be my "S" Word Story of the Week.

Here is my surprising story:

As we were approaching the 'restaurant row' next to the water I spotted a French couple at one of the tables where the man was holding a dog.

Usually the dog has its leash wrapped around a chair leg and it just minds its own business.  Not in the man's lap. So I told Mrs. Jim that I wanted a picture of this scene and its anomaly.

She said that I had better ask in French so as to warm up to the couple.
Mrs. Jim knows French and quickly taught me to say, "Je peux prendre une photo de vous et de votre chien?"

Surprise, surprise; the man chuckled a little bit and asked me in English where I was from.  When I told him "Montgomery, Texas," he told me in turn that he also was from Montgomery.

At first I thought that he was kidding me.  But he and his wife really were, they lived across the lake, about a mile away from us. He worked a the U.S. Customs Office there in Honfleur.  I saw the wife later at our physical therapy rehab therapy place in Montgomery.  We talked some although I doubt I would recognize either of them now.
_ _ _ _ _ _
The Fine Print: - Teresa of Eden Hills, (click) is running this meme, Friday's Hunt.
Her rules are: "Welcome to linkup for Friday’s Hunt. It’s very simple. Anyone can participate. The link opens at 7pm Friday Central time and will close Sunday at 7pm."
_______________________________
..