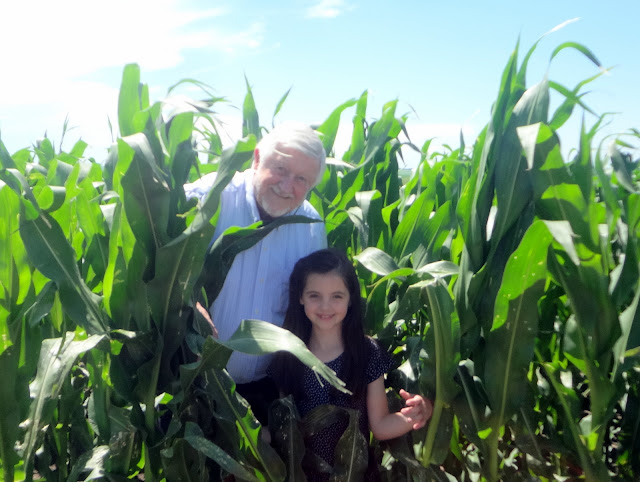 (2) Unbalanced: It's hard to lose one's balance when standing in tall corn.  Here KP and I were standing in cousins Dwaine and Jean's (my first cousin) high corn.  Remember the old saying, "Corn should be knee high by the Fourth of July?"  This picture was taken July 2nd in Nebraska. Neither this sweet corn nor the taller still grain corn has set on ears yet.
(BTW, KP will be eight this Sunday.  Happy Birthday, KP!!!) 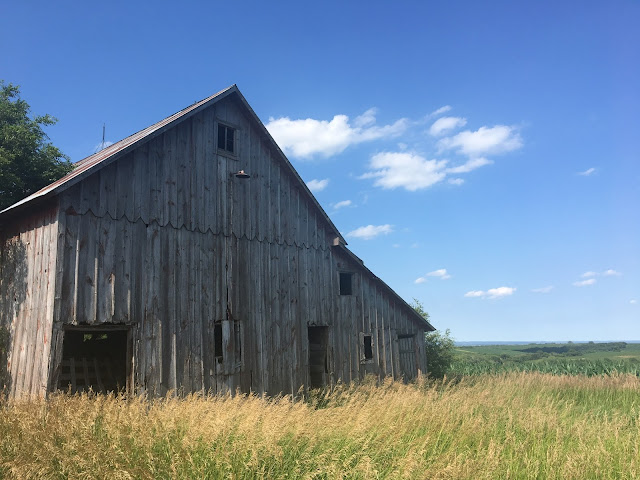 This is the barn on Dad's Eastern Nebraska farm, the farm where I was born and grew up.  I kept Minnie in here when the weather was really bad.  Minnie was the horse I rode to high school for two years.

We also called the milk cows in for eats and milking in the mornings and evenings.  Every day, both.  There was room for 16 cows but I every knew only  when we had twelve at the most.  The cow put would her head into a stanchion  where the feed box was, then one of us would pull a board mechanism up to her neck and lock it.  That locked her in until we were through milking. (Stanchion: a frame that holds the head of a cow in place, especially to facilitate milking)

On the left side of the barn you are seeing where there were horse stalls for up to a dozen horses.  On the right side here was the milking area and the calf barn where the calves stayed when separated from their mothers.  Also here we taught the little calves how to drink.

Above the ceiling of the barn is a second floor.  Ours was used entirely for keeping hay, a hay loft.  I once fell down, out of the loft and landed on my back.  That is one of the few times I have accidently lost my wind.

The window at the apex was for lighting purposes.  Some barns have a larger opening large enough for a hay sling to raise hay into the lofts.  We used pitchforks to put our loose straw and hay inside through a large upper door on the north side.  Also we would put baled hay up there.

This barn was always kept a shiny red when it was ours.  Dad would paint it every five or so years.  Why is it traditional to have one's barn painted red?  KP wanted to know this and she found that Seirie (sp??) on her iPad had an answer of sorts.  It seemed many barns were not painted but rather oiled for wood preservation.  Oiled with a red oil for wood.
(3) Door:  On the barn above you can see that the doors and windows have been removed.  This makes it more uncomfortable for squatters to take up residence in the deserted building.  It also is about the only way of keeping souvenir and relic seekers from absconding with them. (1b) Starts with "B": That would also be "B" for Born.This is the house where I was born. Probably around the turn of the 20th century it was brand new. It had two bedrooms upstairs, a living room, and a country kitchen. Later two enclosed but not heated porches were added.

There were storm windows for the winter. My porch sleeping room was not heated and we did not have air conditioning.

Update:  The new owners bulldozed down the house and then burned the rubble. Corn is now growing over the farmstead except for some trees saved and around where four buildings remain. 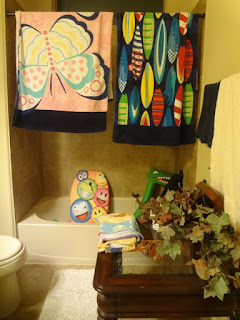 (1c) Starts with "B": That would be "B" for Bathroom and Body Board.  This is what our second downstairs bedroom bath, adjacent to the kitchen, looks like in the summer.  Towels hanging where curtains belong and pool toys in the bathtub.

New addition toy is the body board, i.e. the boogie board.  Mrs. Jim and KP bought it on their way home from KP's golf lesson.  The dragon is several years old.

There are other toys also but we keep the ones here inside to stay out of the sun and heat.
_ _ _

The Fine Print: - Teresa of Eden Hills, (click)is running this meme, Friday's Hunt. Her rules are: "Welcome to linkup for Friday’s Hunt. It’s very simple. Anyone can participate. The link opens at 7pm Friday Central time and will close Sunday at 7pm."