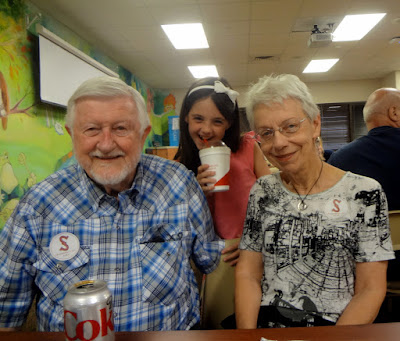 (1) Starts with "K": "K" is for Kids.  Since Sunday was Grandparents Day our third-grader kid's classes hosted their Grandparents for lunch.  We went to KP's school, armed with a Chic-fil-A kid's meal, a chocolate milk shake, a Chick-fil-A chicken sandwich, a Diet Coke, and two small bags of chips, and had lunch with her.

This is our 4th year to attend, their having been back from living in London (U.K.) five years, again for now a fourth year of elementary school observation.

"K" for kid's grandparents also has the kid's learning about cataract surgery.  Mrs. Jim had hers this Wednesday.

And the Kids too worked with crews to dry houses after Hurricane Harvey.  Our help varied, mainly Mrs. Jim and I helped coordinate activities in our Sunday school class in providing prayer support for the victims, for the houses, and for the crews themselves, especially in the area of safety as far as electrical shock, cutting, fatigue, and overheating.

Additionally all three of us, Mrs. Jim, KP--we have been keeping KP for the last ten days, there was no school until Monday--and I one afternoon was spent repackaging and grading diapers into paper sacks holding 20 diapers.  Another afternoon, Mrs. Jim did wheelbarrow duty, hauling wallboard, wet insulation, and carpeting to the curbs at a house that needed drying.

Drying prepares a home for contractor work rebuilding. (In 1979 when our home flooded with 33 inches of water the Flood Insurance Program paid us $36,000 to rebuild outs.  Building costs have more than doubled now, and only 17-20% of Houston homes were covered by flood insurance as the price had gone way up.)

Below is a day's agenda for 12 crews to clean and dry 15 houses.  We are just about finished, there were 618 homes that were appealed to our church needing flood help according to the last figures given us to have our class pray for.  Additionally, "All work and no play makes Mrs. Jim a dull lady" works for certain at our home.  Her she is planning another cruise and looking at last year's which left from Los Angels and went around Cape Horn and back up to Rio de Janeiro. 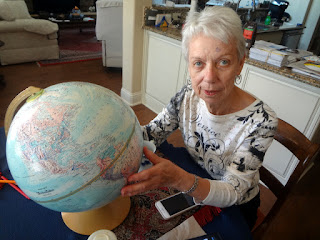 (2) Stinky:  Stinky Feet.  But our daughter and I do not have stinky feet, they smell like STRAWBERRIES.  Have ever since Karen was a little girl. 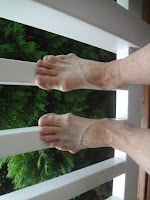 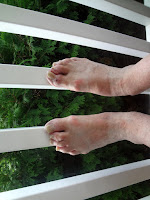 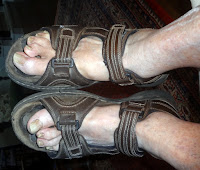 My sister's feet, my feet, and my old sandals.  Ugly foot contest? 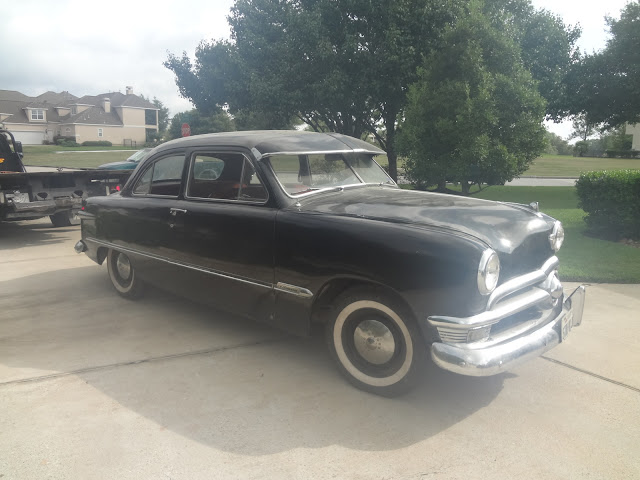 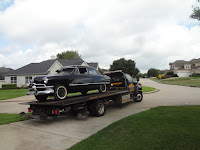 Well, anyway, here is a picture of it up on the flatbed auto hauler.  It does drive, but I never did except around the block when I bought it.  But I did drive it when I visited the new owner, even the overdrive worked.  I think it had 102K miles on it and was all original.  I hauled it back from Nebraska in 2007 but then I didn't know much of it's history.  Neither did the fellow I bought it from.

Note:  I have had another 1950 Ford Tudor, black like this on back in 1965.  It was sort of my hobby car, not club or anything like this time.  It also was original except for the dual exhausts.  A list of all my cars, http://jimmiehov.blogspot.com/2006/11/my-political-call-last-night-eight.html, at the end of the post.

Here is Mom's 1974 Mustang II Ghia.  I was the first owner, Mom wanted me to buy her a stick shift from the lease cars turned in for the Spring of 1975.  I worked for Ford Aerospace at NASA Houston then and some of our executives were encouraged to lease a new Ford every year. 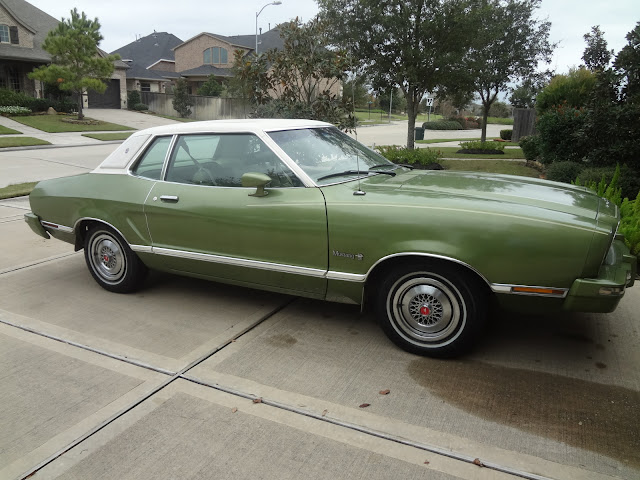 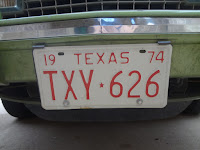 Mom didn't trust the automatic transmission in the car Dad had purchased as she couldn't tell what gear it was in and was afraid it might be choosing the wrong gear at times.  This Mustang II and a hot rod Ford Torino were the only Fords that year with standard transmission.  She said, "Yes, get it for me" of the little down-sized Mustang.  That was the first year of downsizing for it.  It was built on a Ford Pinto chassis (we had a yellow 1972 model Pinto for our driver car--it was lost in our 1979 flood along with two other cars and a motorcycle).
- - - - - -
The Fine Print: - m
- Teresa of Eden Hills, (click) is running this meme, Friday's Hunt. Her rules are: "Welcome to linkup for Friday’s Hunt. It’s very simple. Anyone can participate. The signing in link opens at 7pm Friday Central time and will close Sunday at 7pm." You can read others' posts there any time.