One refers to a person with ze and hir or zir typically (a) when their gender is unknown, and one wishes to avoid assuming their gender, or (b) when they are neither male nor female in gender, making he and she (and also either/or terms like s/he or (s)he) inappropriate and potentially hurtful." 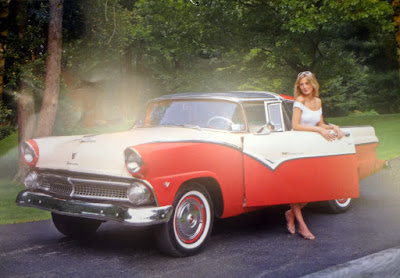 1.b. Starts with "Z": Better I like e Zee, mostly used instead as Easy.  Here we have "e Zee on the Eyes" with this beauty, a Red 1955 Ford Crown Victoria.  The fine print says they sold for $2,202 new.  A new convertible would be $48 less so most opted for the  convertible.  My new 1956 Ford Convertible cost me $32xx.  But it had the Ford Thunderbird engine, auto transmission, and air conditioning.  AM radio, also extra, was it for the Fords and Chevys back then.

I have a story about a particular 1955 Ford.  My grandfather, just about ever since I new him  and the cars that he drove, with a 1942 Ford being the first car I remember him having, tried to buy a new car every year, alternating between Ford products and Buicks.  His last was a White 1955 Ford Tudor.
Click here to read a whole 2009 blog post (shorter than this one) about both my 1955 Crown Victoria Ford Crown Vic and my Grandfather's 1955 Ford.
Grandpa also had a 1941 Ford 3/4 Ton Pickup that he used for farm activities and for hauling his Stud Horse around to the various farms where the horse serviced.  I went with him one time but had no idea of what was happening.  Not until much later.
He kept that truck until he didn't have need for a pickup anymore.  An aside, I believe that a fellow loses a part of his manhood when he has to sell his truck.  I felt that way when I sold my 1986 Chevy pickup.

One day when his '55 Ford was fairly new he took me riding.  After he had asked if I liked his car, he said that when he died I could have it.  Well, he died still having that car but I didn't get it.  I am not sure what happened to it, I was away in the Army then.  And of course he hadn't changed his will for me either.

Pictures of the Calendar January page is from the newest of my NAPA Classic Car Calendar collection.  I have all but the first edition, 1972 or 1973. 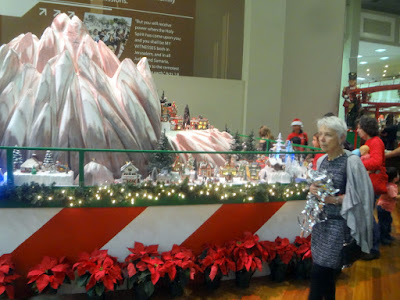 Here on the right you are seeing a reflection of Mrs. Jim, watching and waiting for me to finish taking this picture.

I wanted to show some of our churches' Christmas Train Exhibitions.  We were standing outside a window, hence her reflection in the glass.

3.a. The end:
This will be Teresa's last time for to host the Friday Hunt.  Next year Tom, of The http://backroadstraveller.blogspot.com/2017/12/fridays-hunt-z.html#!/2017/12/fridays-hunt-z.html, the Back Roads Traveler, will be hosting Weekend Roundup which will be going through the Alphabet like I have been doing the past several years.  Both for Teresa's blog and another.

Also my Calendar, with the picture of the 1955 Ford, has this page up front for the end of 2017 with December.

Then the next page, close to the front end, will start 2018, January, with a Red 1957 Chevy Bellaire Convertible.  I will post this and tell you about my friend who have one.  Another scary ending to begin the year with.

You can click and see here pictures and read of some of other NAPA Calendar pages which I have posted here from time to time. 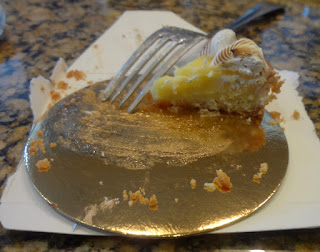 3.b. The end:  This is the end of one of my Christmas presents, a Lemon Pie from Houston La Table.  It was a miniature pie from our daughter, Karen.

She purchased the next to last one for me.   I shared it with Mrs. Jim, here is a picture of the last bite which was a part of her half, or nearly half.  It was really good, "great!!"
https://latablehouston.com/

- Teresa of Eden Hills, (click) is running for the last time this meme, Friday's Hunt. Her rules are: "Welcome to linkup for Friday’s Hunt. It’s very simple. Anyone can participate. The signing in link opens at 7pm Friday Central time and will close Sunday at 7pm." You can read others' posts the link below at any time.
__click here to visit other last time visitors posting this_Week's_Friday_Hunt___

(My wish and message for you, one we share on Christmas Day)
Again, "Merry Christmas and/or Happy Holidays" !!!

Andrea Bocelli - What Child Is This - Live From The Kodak ... - YouTube
Away in a Manger with Lyrics - Christmas Carols - YouTube 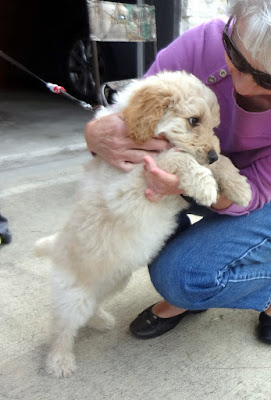 The announcement songs of Jesus birth are some of my favorites.  All are from YouTube that I found and were Okay.  You might find some you like better.  Or prefer selections.  That is fine.  If you want to share you can leave me a comment.