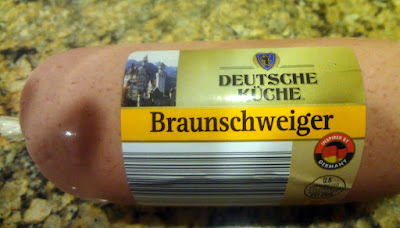 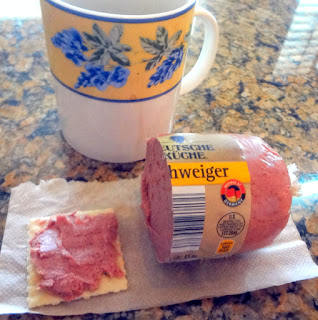 (1) Starts with "L": Liverwurst starts with "L".  Mine is from our local Aldi Grocery which is about thee fourths a mile from our house.  Aldi is a German company which means they import good Liverwurst, aka Braunschweiger.  And Aldi's is about half the price, $1.99 for a pound, of our name brand here--$3.99.   I am thinking that Aldi's might go up because of the Trump Tariff.

I eat most of my Liverwurst on soda crackers, saltines.  But I like best a liverwurst sandwich with Lettuce and Mayo.  I remember once at a NYC deli, my sandwich had Liverwurst about an inch thick.

(much of the following is a Repost: http://jimmiehov.blogspot.com/2016/03/fridays-hunt-v-19-j-is-for.html)
(2)  Week's Favorite is Mom's Egg Scale (see below).  When I was growing up I
lived on a farm.  We grew crops, corn and oats, and feed the harvest to animals from which we sold their produce, eggs and cream, or the animals themselves, cattle, hogs, and chickens.

The chicken end was pretty much Mom's, the feeding and growing and the care of the eggs that the hens would lay.  Saturday night found her cleaning the eggs that were produced for the week.  Often I would 'help' her as it was a good time to have Mom just for myself. 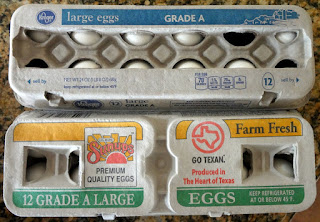 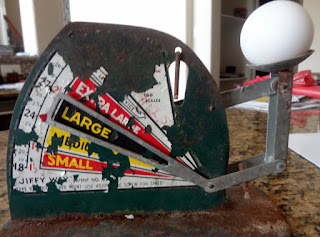 She didn't have to grade them, like Grade AA Large, but this scale would take care of the sizing if she were to sell to an individual or a retailer.  Most times we took the eggs to a produce house.

Chart is from Southern States Cooperative; How to grade and size eggs.
[click on it for a larger size view]
A Large egg weighs 2 ounces average.  Officially 12 Large eggs packaged together should weigh 24 ounces which makes each Large egg weigh approximately two (2) ounces.  My egg is a Large as it points directly to the "24" on the scale.
It is hard to read but it say that eggs are not sized individually, but rather sized by the combined weight of one dozen eggs. That explains that each of the packages, from Kroger and from Trader Joes each contained a few eggs weighing less than two ounces.

Mom was a city girl when she married my dad.  Her farm duties also were to pretty well take care of the very large vegetable garden we had.  She would have a row or two of flowers also.  My sister Lois (link) and I liked to help her there as we could eat the fresh vegetables we picked or pulled out of the ground, carrots, radishes, tomatoes, melons, and strawberries.

(3.a) Long:  It was a Loooong Game, but my Alma Mater (one of them), the University of Houston did win their first game of the NCAA 2018 Tournament against San Diego State.  Then Michigan beat Houston by one point in a nail biter.  Last night Michigan beat Texas A&M by 27 points, 99 to 72.  Now all the Texas teams have been eliminated. 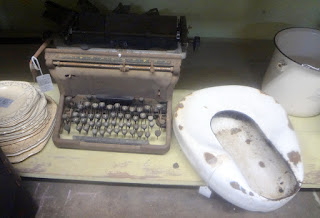 (3.b) Long:  It has been a Loooong time since I have seen a bedpan like this enameled one.  Most are plastic anymore.
I found it in a resale and boutique store in Farmerville, Louisiana, early in March when we were there.  You could run up, perhaps down for you, and purchase it for $15.00 plus an exorbitant tax, 12%. 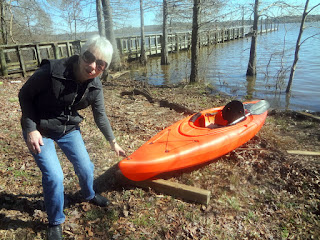 (3.c) Long: This seemed to be a Looong Kayak, one for two passengers.  We found it beached at Lake D'Arbonne in Louisiana.  Neither Mrs. Jim nor I have ever worked a Kayak.  She has an artificial hip transplant and I have one in my knee.  Both of us are Leary of putting our legs down in the boat, stretched out.  I would try Kayaking with on that we sit upright and our legs are on the outside.
(4) Lagniappe:
The United States has four brands of automobiles starting with "L":
I will chose Lincoln as they are manufactured by Ford Motor Corporation.  I was employed as an Aerospace Engineer by Ford for 17 years after I left the U.S. Army.  I worked first at a Satellite Tracking Station in New Hampshire for three years and then by last 14 years in Houston at the Manned Space Center Houston.

I think the prettiest is the 1998 Lincoln Mark VIII is my favorite, but a Fordor instead of the Tudor shown in the picture.

I also like just as well the 1931 Lincoln Coupe and the 1941-1948 Lincoln Continental.  I show these cars in order above, all pictures are in the Wiki Commons and free to be used.  I found these pictures at Wikipedia, https://en.wikipedia.org/wiki/Lincoln_Motor_Company , as files from the Wikimedia Commons .  There are pictures of every production model there.

I also like the Lincoln current emblem, it is simple yet striking.  I found my logo (emblem at http://www.car-brand-names.com/car-logos/ 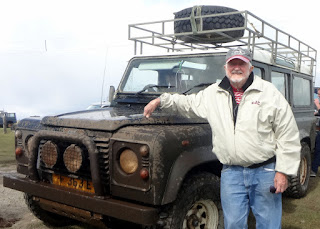 Since going to The Falklands I have grown found of the British Land Rover, pictured with me here.  We had just come back from riding through the marshes to and from the Penguin Preserve (link http://jimmiehov.blogspot.com/2016/12/fridays-hunt-v227-b-is-for.html ).
Penguins visit: http://jimmiehov.blogspot.com/2017/01/fridays-hunt-v301-is-for.html
_ _ _ _

The fine print: -  I am linked with Tom of "Backwoods Travel" (Link to Weekend Review 2018)- The pictures are all mine and rights are reserved to me under Copyright Law.
- Click on any picture to make it "full screen" sized. Click on your "Back" button to get back here. 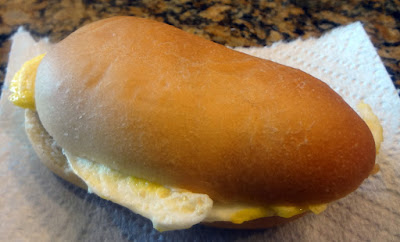 The 11th issue of Weekend Roundup for this year...
The week's prompts:

(1) Starts with "K": Kolaches starts with "K".  Our daughter bought us this pictured above Kolache, it is a Sausage and Cheese Kolache left over from some more that she and KP brought.  Since it was a leftover, I modified it by adding half a hard fried egg.  Below are a 'work in progress' and an 'almost finished eating' pictures. [click on any picture to see it in larger sizes, one or two clicks] 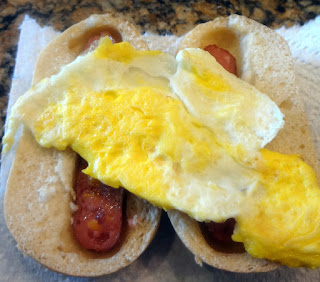 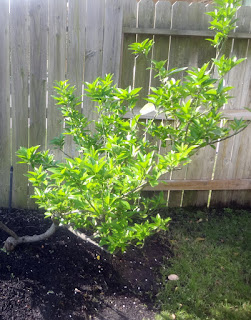 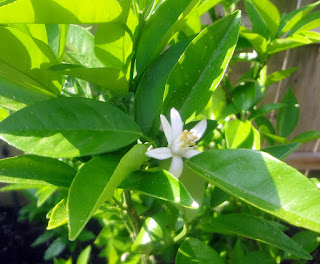 2) A Favorite: This is our lemon tree.  It could be a lime tree, we've not had one piece of fruit from it before so we aren't sure what it is.  It blooms in the spring but doesn't set on fruit.  A rain we had beat off a lot of the blossoms, you can see some of the fallen pieces below the tree in the first picture.


We don't see any bees.  Our long term U.S. Senator killed a bill for the Federal Government to spend money trying to figure out why the bees are declining drastically.  I don't think he believes in Climate Change either. 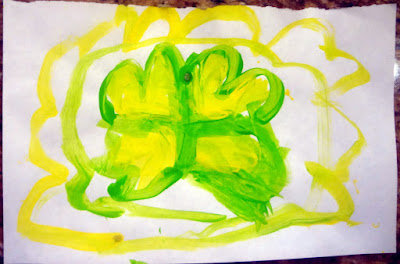 (3) Kids: This shamrock was drawn and painted by KP, our youngest granddaughter.  She says it is a four leaf clover but aren't they the same?  Dunno for sure but I always thought so. 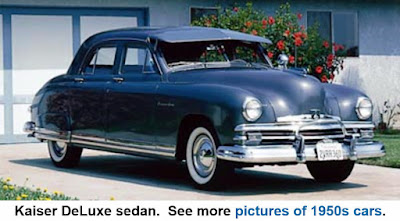 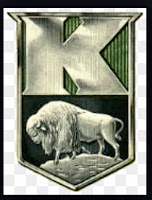 (4) Lagniappe:  Kaiser starts with "K".  Manufacture of Kaiser-Frazer cars began after WWII in 1946.  "The company was founded on July 25, 1945 and in 1946 K-F displayed prototypes of their two new cars at the Waldorf Astoria Hotel in New York City. The Kaiser was of an advanced front wheel drive design while the Frazer was an upscale conventional rear wheel drive car... " Wikiepedia, link

"By the end of 1946, over 11,000 cars (total Kaiser and Frazer) went out to dealers and distributors; many of them sold to retail owners... (in) 1948, the 300,000th car came off the production line.  In 1950, Kaiser-Frazer began production of a compact car, the Henry J and ended production of the Frazer automobile... In 1952 and 1953 Kaiser-Frazer provided Sears Roebuck & Co. with Allstate-branded automobiles that Sears sold through selected Sears Auto Centers... " Wikipedia, Kaiser Motors, link
Henry J photo Source, Curbsideclassic.com
http://www.curbsideclassic.com/blog/car-show-classic-1953-kaiser-henry-j-corsair-de-luxe-big-name-little-car-no-sale/

The fine print: -  I am linked with Tom of "Backwoods Travel" (Link to Weekend Review 2018)- The pictures are all mine and rights are reserved to me under Copyright Law.
- Click on any picture to make it "full screen" sized. Click on your "Back" button to get back here.﻿
﻿