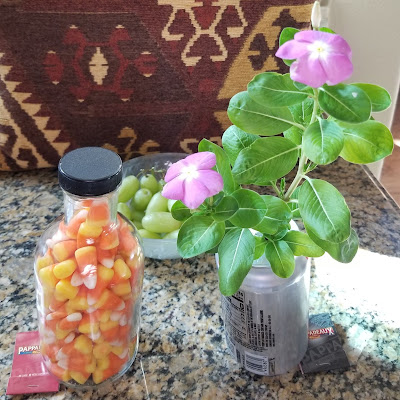 [click on picture a couple of times for larger]

(A) Starts with the Letter "N":  National starts with the letter "N".  I always think of our National Anthem, the Star Spangled Banner when I think of that word.
I also think of National Days.  October 30th is National Candy Corn Day, it comes one day before Halloween.  So does my Birthday.    I always buy a bag of Candy Corn, again this year I already have it.  October 30th is also my birthday, it started as a joking sentence, that for my Birthday I would run away.  Most times if I do, all times so far, Mrs. Jim and perhaps other relatives run with me.
Some I have blogged about, I remember best the year I ran to New York City when our younger daughter ran the New York City Marathon.  Mrs. Jim and I followed her to six locations on that run using the city subways.

[Photo is a screen shot of our Channel 13 from Houston, Texas]
(C) A Favorite:   I like watching Car chases on TV when nobody gets hurt and the crook is caught and cuffed.  I didn't see the end of this one as our Houston Astro baseball came on (they won the game and the wild place in our division.)
In the picture the white car on the left is being pursued by Houston police cars.  Those have white doors.  The are followed by or Texas state Patrol in the SUV's with the white hoods..  It was surmised that a woman was driving as she wasn't speeding and signaled all her lane changes. 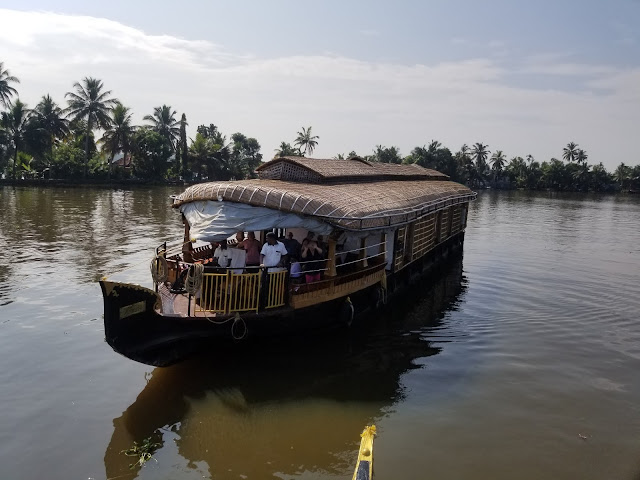 (D) Reflections:  Backwater cruising during our January 16 stop at Cochin, India.  We spent the morning on a houseboat larger than this one, it had an upstairs outside deck, then disembarked after lunch.
_ _ _ _
Bonus Questions:
1.  What kind of action do you prefer on TV?  In addition to the chase scenes I like "Dancing with the Stars" shown on Monday nights.
2.  What is your favorite "N" word?   I like "No" because I don't have much Negative in my life.  Saying it adds some excitement going against the grain.
_  _  _
The fine print: - [Click on any picture for larger, click it again for extra large]- I am linked with Tom of "Backwoods Travel" (Link here to click for Tom's Weekend Reviews)- I am also linked this week with James of "Weekend Reflections" (click here for his Reflections Photos).- The pictures mostly are all mine and rights are reserved to me under Copyright Law.