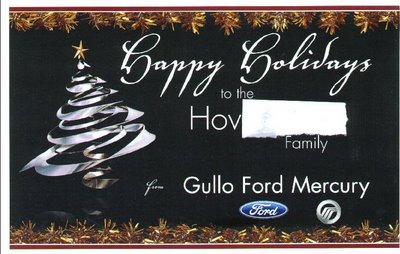 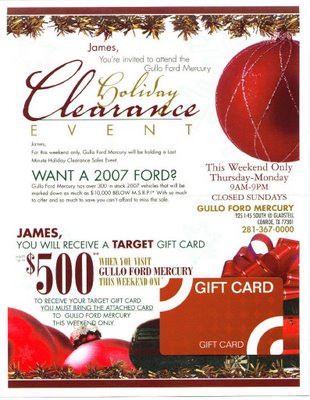 Well, me for one 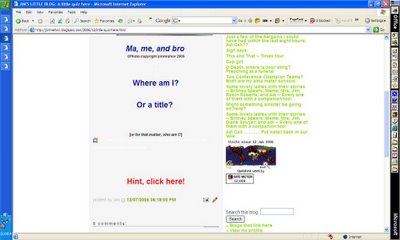 This was it. Click to enlarge or for more detail, see the picture below.
. 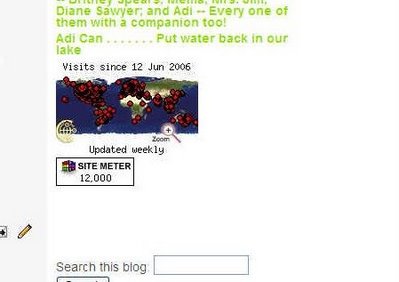 Just a few of the bargains I could have had within the last eight hours: Adi Can??

There were 104 e-mails in my SPAM box this morning at 8:30. I had cleared it out at midnight last night. There will be about 200 more yet today for me to clear out. 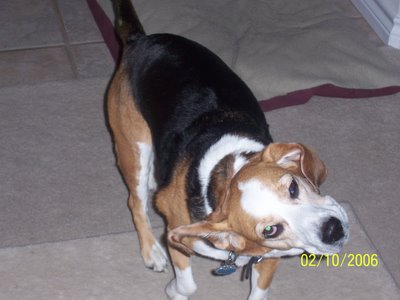 Vonage Savings Center; Slice Your Phone Bill In Half 5k

National Soda Survey Which Soda do you prefer? Tell us! 9k

Spin And Win Take a Spin and Win jim 3k

Harold Wanna check it out 30k

Funds for School jim: Time is running out to apply for a $10,000 cholarship 2k

Ho O. Flossie This was my first exposure to Japanese hotel rooms, which are very,very, very sma... 15k

College Cash jim: Time is running out to apply for a $10,000 scholarship 2k

American Rights at Work Take 5: Victory at Hugo Boss, Naughty & Nice employers, Gift Ideas 31k
Humor SPAM Life Friends Weblog email e-mail Internet Photos Life Pets and Animals daily Animals
Most of these sound wonderful. What would you have to trade me for some of these? Irresistible!

I haven't opened any of these, I'm just saving them for any takers! 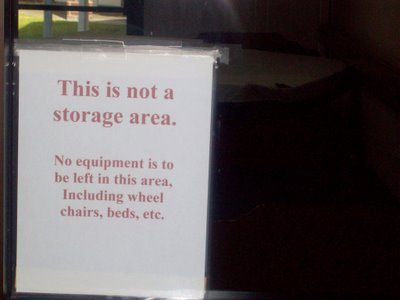 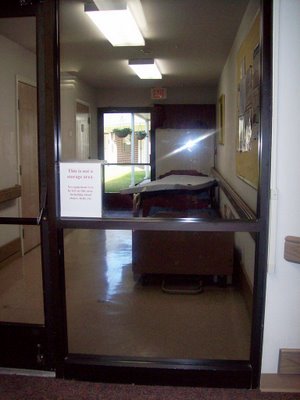 This and That -- Times four

This, One:
.
Christmas is coming. Now 21 days, are you almost ready?
.
That's what Advent is about, this is the candle set-up for the First Sunday of Advent. There are four Sundays of Advent before Christmas, here there is one candle for each Sunday.
.
Advent is all about being ready for the true Christmas. It is a time to draw close to God. This Scripture may be appropriate for this first week of Advent:

"Jesus said to his disciples: 'Be constantly on the watch! Stay awake!...You do not know when the Master of the house is coming.'" Mark. 13:33 First Sunday of Advent

When I was growing up I never had heard of Advent. That was even in the Baptist Church in Nebraska, I just don't remember talking about Advent.

Then the series of Methodist Churches I belonged to in Texas, New Hampshire, and back in Texas didn't really talk about Advent much and so I didn't know much about it.

Neither did the Baptist churches dwell on it until we moved to the First Baptist Church of Conroe. For the last two years and again this year we are lighting Advent candles. Yesterday we lit the first one. Then the preacher talked about getting ready to celebrate Christmas, the Birth of Christ.

Some links on Advent:
Meditations for Each Week of Advent
Advent Begins December 3, The start of the Christmas season
Advent Calendar, 2006 ("25 fun filled days of surprises")
Advent from Wikipedia, the free encyclopedia 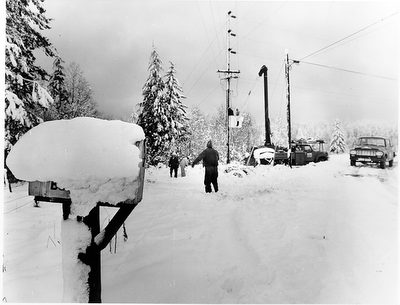 That, Two:
.
St. Louis is at it again. Not only does St. Louis have the worst crime rate [St. Louis Tops Dangerous City List (link)] in the nation, it also has terrible weather.

This summer when we came through they had tornados, two in one week. Tens of thousands had their power out for days. Houston power companies send their trucks and crews to Florida and the rest of the Gulf Coast every summer to help with hurricane relief. Maybe we should be sending them to St. Louis also.

Now their at again with the weather, they had sixteen (16) inches of snow in St. Louis last Friday and Saturday. About 464,000 customers were without power.

I'll pick Montgomery, Texas, any day of the week or year or for my entire life. You'll find maybe an inch of snow every 20 years, golf year around, no murders for since I've been here, pretty scenery and hills, good fishing, and on-and-on with the good life here.
. 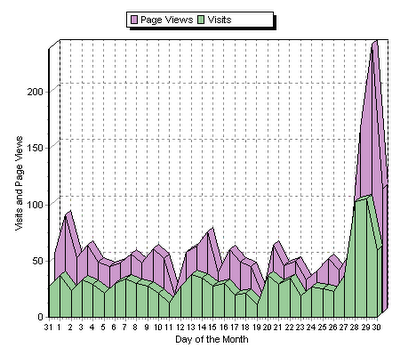 My blogging last Saturday took a turn for another year. Bravo, Jim has done a whole year now.

The graph above shows the activity for the month of November as provided by my SiteMeter. 555 posts on this blog, about 11,652 hits or clicks, and 208 posts on my other blogs kept my busy.

My goal of 12,000 clicks the first year was short by 348. I tried to fudge this by blogging about the Bachelor and Britney Spears and tagging appropriately.

That was exciting but I won't do it again for the numbers. In fact I'm trying to figure out how to cut down some on my blogging. I may not post every day? And definitely I need to be more faithful in my reading of friends' blogs.
. 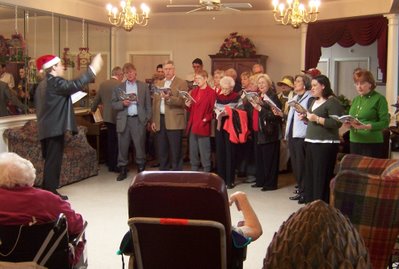 .
That, Four:
.
There is Christmas in the air! Above is the first group of Christmas carolers I have heard this year. I have a feeling a lot more will be coming right along. Christmas britney-spears Christmas Carols Life Blogging Photos

O Death, where is your sting? Preaching at a funeral

52 in a moment, in the twinkling of an eye, at the last trumpet. For the trumpet will sound, and the dead will be raised incorruptible, and we shall be changed.
53 For this corruptible must put on incorruption, and this mortal must put on immortality.
54 So when this corruptible has put on incorruption, and this mortal has put on immortality, then shall be brought to pass the saying that is written: “Death is swallowed up in victory.”
55 “ O Death, where is your sting? O Hades, where is your victory?”
[1 Corinthians 15:52-55] [more below, verses 50 through 58]

My friend, Sam L., read this verse and quite a few others today.

It was at the funeral of another friend, Jim Umbehr. After Sam's words and the stories about Jim brought out by his three children I decided that there was a lot of Jim's life that I had not known before.

I hope someone will tell about me at my funeral. There are things that should be shared but are only known by those pretty close.

I also hope that someone will preach a sermon at my funeral. A good old fashion revival sermon is my order, that some of my friends who are not Christians may know of Jesus Christ's love for them.

That love for them, just as he loves me, can save them from eternal damnation for their sin. All they need to do is repent and ask the Living Lord Jesus to save them.

That's why I think it would be nice to have Sam preach the Gospel of Jesus at my funeral.

JIM UMBEHR
.
Funeral services for JIM UMBEHR, 77, of Conroe will be held on Saturday, December 2, 2006 at 10 a.m. in Cashner Colonial Chapel with Rev. Sam Longbottom officiating. Entombment will follow in Garden Park Cemetery's Chapel in the Park Mausoleum.
Visitation is scheduled for Friday, December 1, 2006 from 5 to 8 p.m. in Cashner Funeral Home.
Mr. Umbehr was born on October 20, 1929 in Seymour, Texas and passed away on November 27 2006 in Conroe, Texas.
Jim was employed by Dresser Industries for over 30 years.
He is survived by his wife, Jean Umbehr of Conroe; Kihm Blount of Conroe, Keen and Eileen Umbehr of Alma, Kansas and Kevin and Falethesa Umbehr of The Woodlands; nine grandchildren; and 4 great grandchildren.
In lieu of flowers, donations may be made in his name to the First Baptist Church of Conroe, 600 N. Main, Conroe, TX 77301 or to Lighthouse Hospice, 200 River Pointe, Suite 300, Conroe, TX 77304.
You are invited to leave a written tribute for the family on ...
Published in the Houston Chronicle on 12/1/2006.
.
.
Preaching Preacher Preach Gospel Preaching the Gospel Life Religion Religion and Philosophy Friends Friend
.
1 Corinthians 15:50-58 (New King James Version) (NKJV) (link)
50 Now this I say, brethren, that flesh and blood cannot inherit the kingdom of God; nor does corruption inherit incorruption.
51 Behold, I tell you a mystery: We shall not all sleep, but we shall all be changed—
52 in a moment, in the twinkling of an eye, at the last trumpet. For the trumpet will sound, and the dead will be raised incorruptible, and we shall be changed. 53 For this corruptible must put on incorruption, and this mortal must put on immortality.
54 So when this corruptible has put on incorruption, and this mortal has put on immortality, then shall be brought to pass the saying that is written: “Death is swallowed up in victory.”
55 “ O Death, where is your sting? O Hades, where is your victory?”
56 The sting of death is sin, and the strength of sin is the law.
57 But thanks be to God, who gives us the victory through our Lord Jesus Christ.
58 Therefore, my beloved brethren, be steadfast, immovable, always abounding in the work of the Lord, knowing that your labor is not in vain in the Lord.