Busted and grounded, this ARF truck + A witches moon 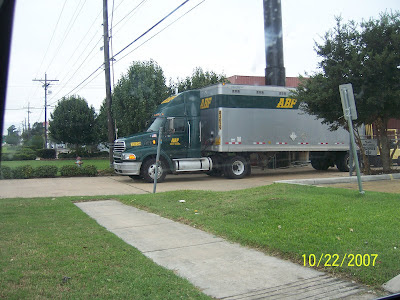 This ARF truck and its driver are in trouble. The DPS, Department of Public Safety, had their black and white over there going all over the poor ARF truck.

I saw it and the officers in the driveway next to where I get the oil changed in Mrs. Jim's car. When I came out, the truck was still in the driveway, headed out, but abandoned. I guess it will get towed away soon.

For the longest time I couldn't figure our what my sister was calling these ARF trucks.

Well, it turned out it was ABF, not ARF. She just couldn't read it correctly. These ARF trucks are all over the road here.

When my sister discovered her mistake she decided to still keep on calling them ARF trucks.

She did find a friendly driver who gave her a nice ARF ABF hat. 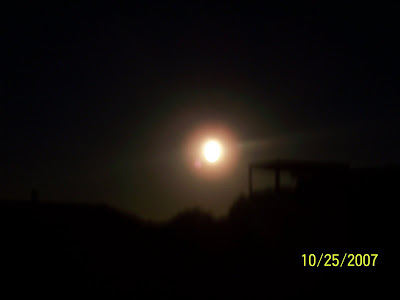 Full Texas harvest moon here is setting over the neighbor's home. We have five more days, I wonder how much of this moon will be left on the witches' big day to give ample light for them to fly around?

Witches mostly only fly around at Halloween time. They love to silhouette themselves on the face of the moon! 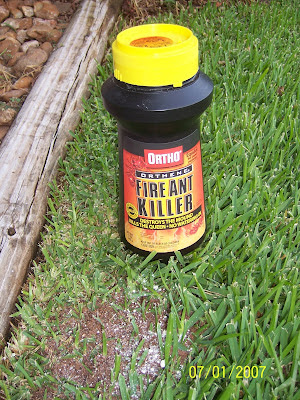 October Bug could not be found. I wonder where he went? 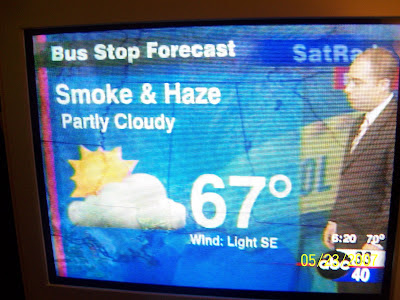 San Diego Fire Map link --Didya know? President Bush is going to put out the fires around San Diego so our Houston Texans can play football there in QUALCOMM Stadium this Sunday? (link) 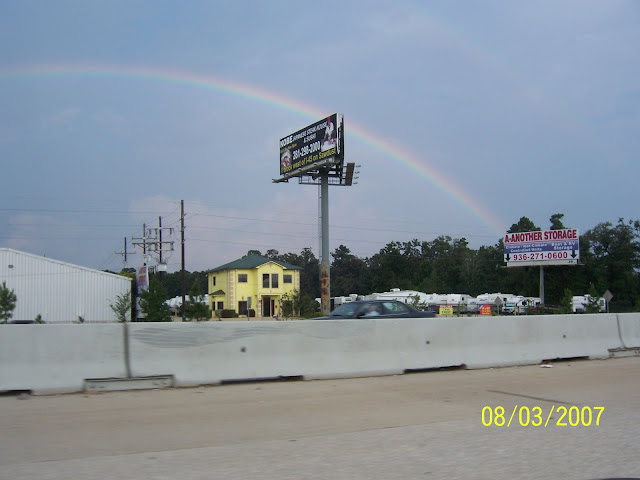 --Didya know? It's been "A Rainy Night in Georgia?" Those people have been waiting a long time for this rain. BTW, it has been discovered that "the end of the rainbow" is at the A-ANOTHER STORAGE facility. This picture proves it!

--the lagniappe: Wet Pants Story A nine-year-old was kid sitting at his desk when suddenly there is a puddle between his feet and the front of his pants are wet. He thinks his heart is going to stop because he cannot possibly imagine how this has happened. It's never happened before, and he knows that when the boys find out he will never hear the end of it. When the girls find out, they'll never speak to him again as long as he lives. The boy believes his heart is going to stop; he puts his head down and prays this prayer, "Dear God, this is an emergency! I need help now! Five minutes from now I'm dead meat" He looks up from his prayer and here comes the teacher with a look in her eyes that says he has been discovered. As the teacher is walking toward him, a classmate named Susie is carrying a goldfish bowl that is filled with water. Susie trips in front of the teacher and inexplicably dumps the bowl of water in the boy's lap. The boy pretends to be angry, but all the while is saying to himself, "Thank you, Lord! Thank you, Lord!" Now all of a sudden, instead of being the object of ridicule, the boy is the object of sympathy. The teacher rushes him downstairs and gives him some gym shorts to put on while his pants dry out. All the other children are on their hands and knees cleaning up around his desk. The sympathy is wonderful. But as life would have it, the ridicule that should have been his has been transferred to someone else - Susie. She tries to help, but they tell her to get out. "You've done enough, you klutz!" Finally, at the end of the day, as they are waiting for the bus, the boy walks over to Susie and whispers, "You did that on purpose, didn't you?" Susie whispers back, "I wet my pants once too." . [From Spiritual-Short-Stories.Com (link)] . Lagniappe defined: . NOUN: Chiefly Southern Louisiana & Mississippi 1. A small gift presented by a storeowner to a customer with the customer's purchase. 2. An extra or unexpected gift or benefit. [From The American Heritage® Dictionary of the English Language: Fourth Edition. 2000 (link) --Another lagniappe: For you, Mrs. Mac, the mail (link) is gone now too! 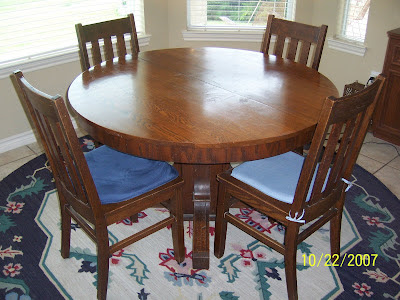 He had used drugs for many years. Now he has been clean for nineteen years.

This is his message: 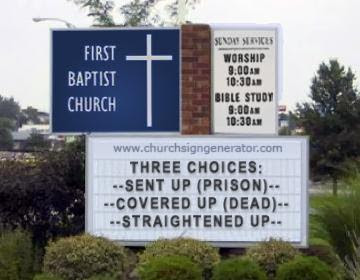 He said he could not have straightened up without God's help

And he said he knows he will always be an addict, just a straightened up addict now.