The Jim Bunch eats again! What is this meal? 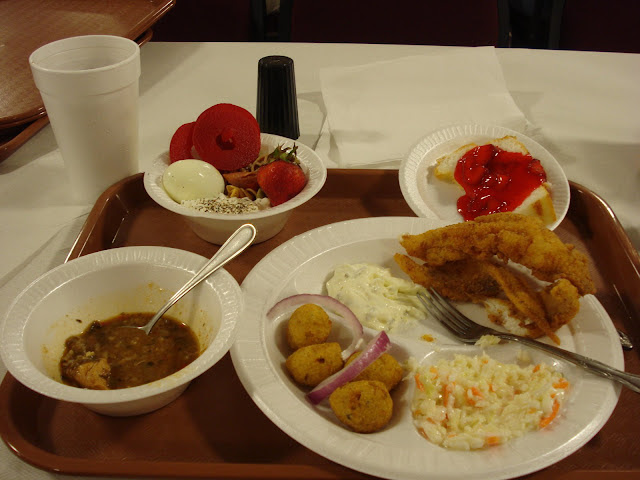 [click here for large picture] [super size it!]
.
Our church had a business meeting this week on Wednesday night. It is either tradition or subliminal coercion that on the business meeting nights we have fried catfish for the evening meal.

Our church has paid kitchen staff and cooks, so we have to pay for our meal to defray the church's expenses. The meal is $4.00 with no extra discount for senior citizens. Just so you know, more than half of us attending on Wednesday nights are seniors.

The drink: iced tea, mine is unsweetened with lemon slices
My salad: a mixture of pasta, pickled beets, egg, cottage cheese, and a strawberry
Dessert: strawberry shortcake using angel food cake
Entry: fried catfish strips, cole slaw, hush puppies, onion rings (I ate these before taking the picture), onion, and tarter sauce
Soup: chicken and seafood gumbo (my preference is leave out the chicken, put in some sausage) 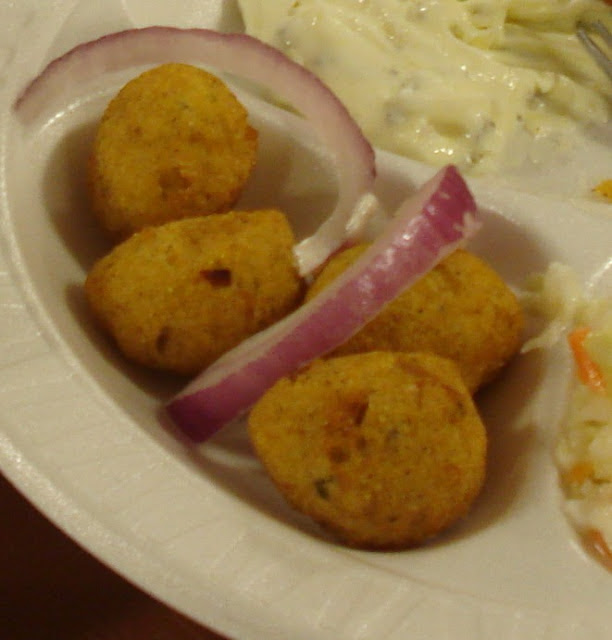 Hush puppies are pretty much Southern food served with fried fish. That is unless we are talking of shoe brands (link). The eating kind are basically corn bread rolled into a ball and deep fried (recipe link).

Why are they called 'hush puppies?'

Mrs. Jim said her grandmother would make them almost every day. The hound dogs--like Adi--would gather round and howl a little, they knew their turn was coming.

Then Grandma would call out, "Hush puppy! Hush puppy, hush!," as she would throw each dog in turn his or her hush puppy, hot from the pan. I have no idea how many hush puppies make a hound dog quiet down. We don't feed Adi hush puppies so I for sure don't know and Mrs. Jim can't remember how many it took her grandma to throw.

The Antique Rose Emporium has some wonderful landscaping. They specialize in antique roses. We took a lot of pictures, everyone did. I especially liked these. 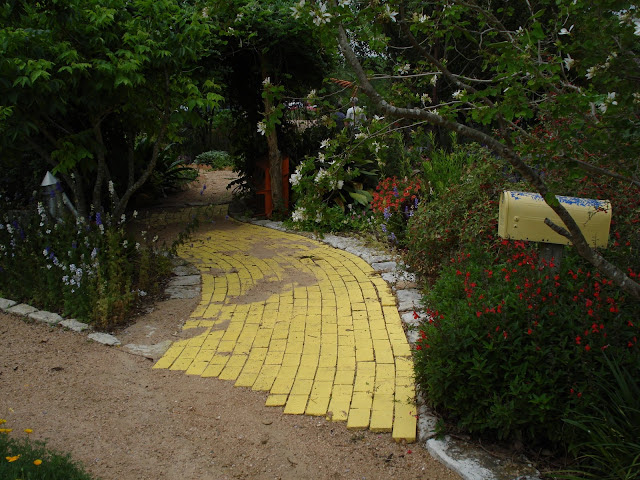 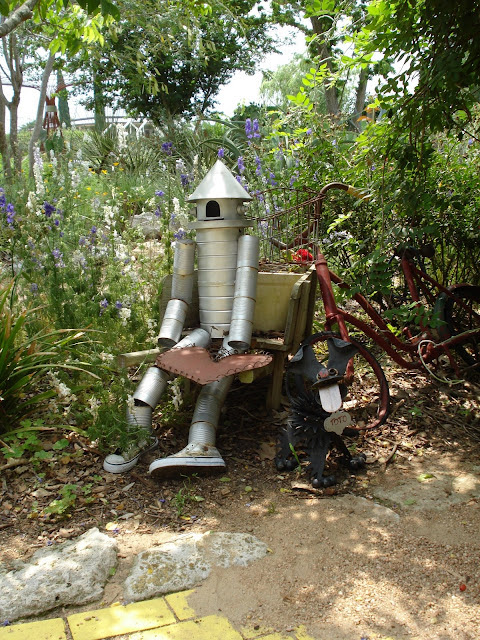 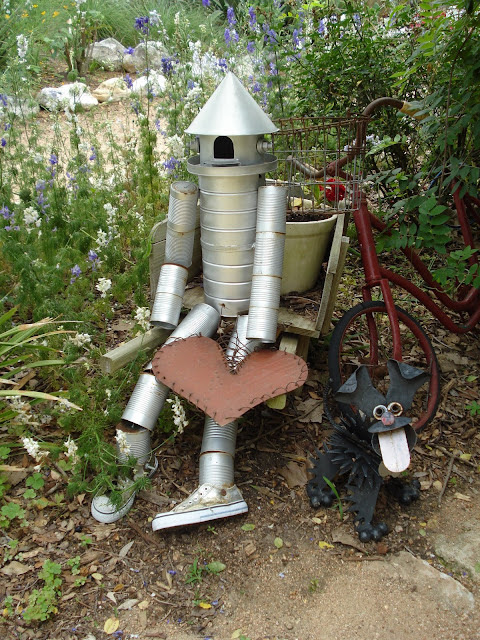 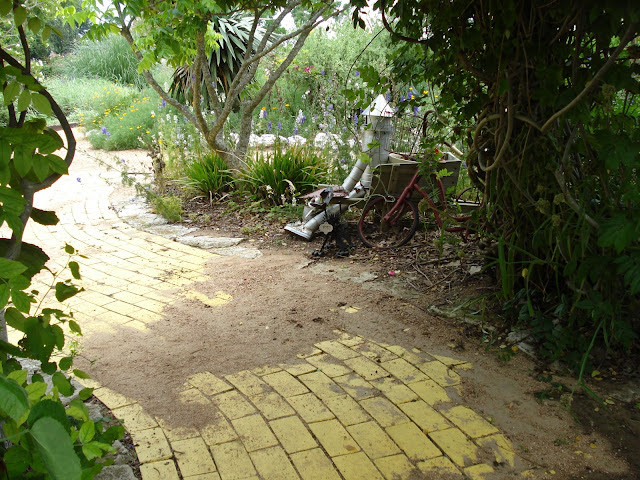 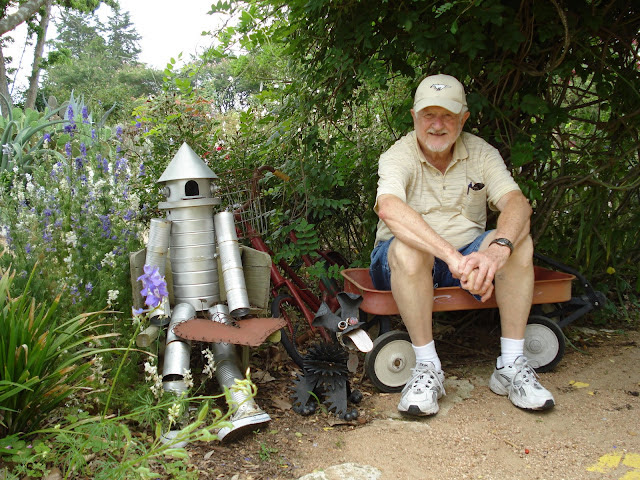 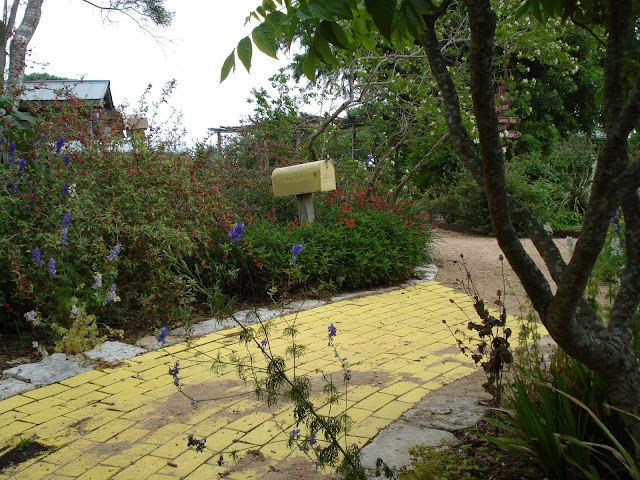 Don't complain about your hot dog, it could be a lot worse 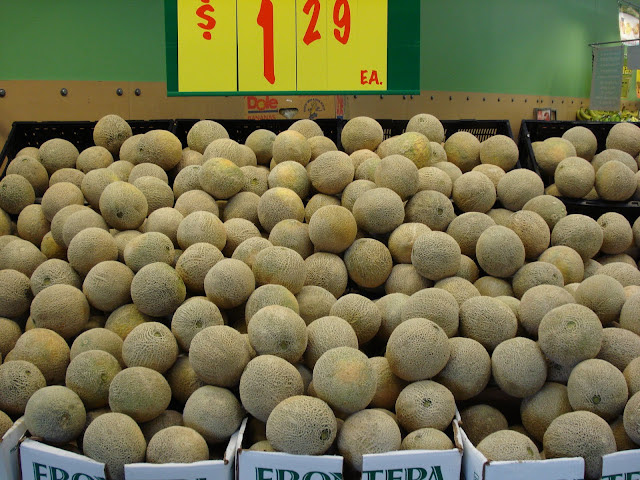 Food from the LORD:
4 The rabble with them began to crave other food, and again the Israelites started wailing and said, "If only we had meat to eat!
5 We remember the fish we ate in Egypt at no cost—also the cucumbers, melons, leeks, onions and garlic.
6 But now we have lost our appetite; we never see anything but this manna!"
Numbers 11:4-6 NIV 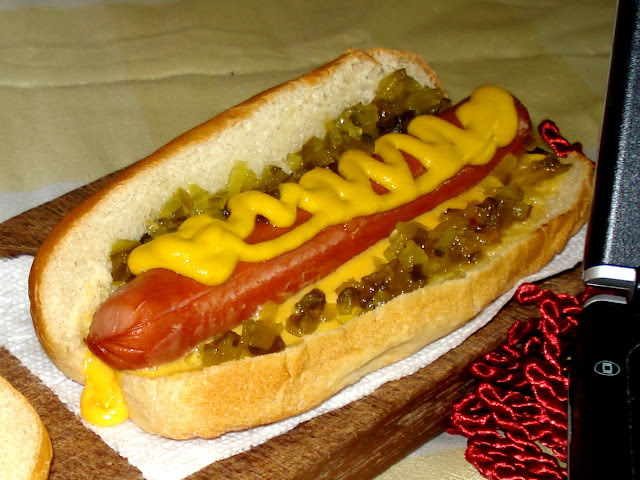 31 Now a wind went out from the LORD and drove quail in from the sea. It brought them down all around the camp to about three feet above the ground, as far as a day's walk in any direction.
32 All that day and night and all the next day the people went out and gathered quail. No one gathered less than ten homers. Then they spread them out all around the camp.
33 But while the meat was still between their teeth and before it could be consumed, the anger of the LORD burned against the people, and he struck them with a severe plague.
34 Therefore the place was named Kibroth Hattaavah, because there they buried the people who had craved other food.