Do you suffer suffer from friggatriskaidekaphobia. It's a 99-year-old word made up of a combination of the Norse and Greek roots words for "fear" and "Friday" and "13." Read more here
Today is also 'Left-hander's Day.' Read more about that there on the same page.

Flashback Friday # 9 ~ What do I remember about school?

All about our early schooling is what Linda wants from us this week. Linda asked several questions. Click her icon, right, if you want to read others or participate in this.
.

She has a neat meme this week. Neater than for the amount of time I have to write it. But I will jot a few notes in again in the format that I used for last week. I sure can't remember a lot of detail on some of what she asked.

Did your family have any back-to-school traditions when you were growing up?
I always got a new pair of bib overalls to wear to school. And for the early years Mom would make me a couple of new shirts from feed sacks.


(My own family I generally got a picture of, getting on the bus, dressed nicely, etc, until the kids got too big for doing that. I don't remember Dad doing that. Mom didn't take pictures.)

Were you generally eager or reluctant to start school?
Our school was grades 1-8 and I loved going. I soon learned to listen to the big kids as they would do their reading classes. I have had far more read to me than I have read myself.

Was buying school supplies a big deal or did you order them through the school? Were there any school supplies you particularly loved?
A Big Chief white page tablet and some new pencils were about all I got. I had to use the ruler I got in the first grade for eight years. I liked new crayons too but often times they would come at Christmas time and not in the fall. I may have gotten them both times if I really needed them.
.
Did you take your lunch or buy it at school? Brown bag or lunch box/thermos?
They didn't sell lunch in the grade school or the first two years of high school.


Until the folks got me a box with a Thermos my mom packed my lunch in a silver colored syrup can with a wire bail handle. Like a paint can is now.

Does the first day of school from any grade stand out?
Yes. One day in the first grade (link) was quite memorable.


Another day we had a big tornado in the neighborhood and we all (seven or eight) went down into the storm cellar. My Uncle Howard (link) came up to be with us. He and the teacher would let us come up to the door to see, one at a time. Afterwards I still remember finding a big hailstone with a clock gear part frozen inside.
Did you ride the bus, walk, or go by car to school?


Grades one to eight I walked or rode my bike to school which was a mile away, and yes, up hills and down hills, in the snow and in the rain. I had to share the bike (link) with my sister, Lois (link).


I remember a few blizzarding days when Dad had to take us with the horses and two wheel trailer. We were snuckered down under a tarppolion. School was never cancelled because the teacher always boarded with neighbors just down the road. She always walked.


Grades nine and ten I rode my bike or our horse, Minnie. It was a three mile ride to this country school so it was way too far to walk. That school had two rooms, one for grades one to six. The other room was grades seven through ten. Both years I went there for high school there were three students in our class.

The two years for town high school, 14 miles from home, I drove Dad's 1949 Ford pickup. He bought it new, partly for me to drive to school. Previously he had gotten me a low mileage 1937 Ford Tudor which had been owned by a little old lady. But he decided that it was not safe for a 14-year old to be driving every day. It did not stop good with the old mechanical brake system and so he traded it in for the pickup.

I had four driving accidents with Dad’s truck. Only two were my fault. Once, on the way home from school, a drunk driver came into my lane. I couldn't get into the ditch because there was gravel piled about 18 inches high all along my side of the road.


Do you remember how early or late school began/dismissed each day?
I really don't remember exactly. Most times I feel was around four in the afternoon.

Did you go to kindergarten? Half-day or whole day?
Our country school did not have kindergarten so I started in the first grade. My parents made me wait a year so I could have another child in my grade. She left for parochial school in our third grade. She was also the principle in the cellar incident (link).
I might brag a little here. When I went to high school in town, Tekamah, Nebraska, for grades 11 and 12 they would not accept my grades as I had earned them. They were all "A"s but the new school said that would be too high for students coming from a country school. They 'discounted' them some, I don't know how much, to equalize with the town students.

Then in the BIG high school in town I again made all "A"s. They did not discount them but I could not be valedictorian or salutatorian with those earlier discounted grades on my record. I was in the top ten percent of our class of forty-eight and was eligible to take the University of Nebraska Regent's Exam. That was good for a tuition scholarship for me. The valedictorian got the only other one.

Mom said she could never remember me bringing homework home. That is why I had trouble academically at the University of Nebraska. I had not learned to study.

Enough of the bragging, Linda did not ask us to do that.


Note: In the picture above I was the boy in the rear. My cousin, John, on the right front was the other boy. My sister, Lois, was on the front left and another cousin, Ione, was to her right. Lois was probably in the second grade as she started school when she was four. That would put me in the sixth grade. This is the only school picture I could find today. I do have a few others somewhere.

Falling down in an escalator that's going up — MidWeek Blues — 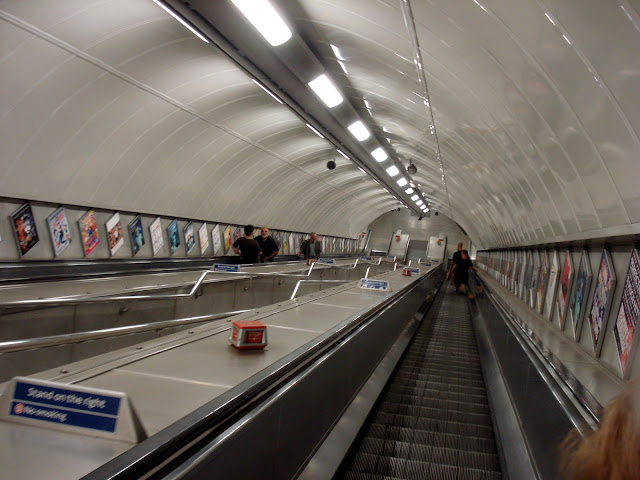 First off, that doesn't sound easy, does it? These are long escalators. Here we are looking at approximately the bottom half, perhaps a little more.

Second thing falling down an up escaltor means it's hard to hit bottom to stop falling. We were going up to get out of the London Metro near Karen's home. You can see the posters along the side advertising theatre productions. They are hard to read as a person goes by them pretty fast.

Third, older people should pay attention to what they are doing. The others, Karen, Billy, and Mrs. Jim, had me interested in one advertisement in particular, for a children's play that advertised "Room on the Broom." I could never see it as we would pass by quickly; almost we were past before they could even tell me.

Fourth, for sure don't be taking pictrures while riding. This time there was one across on the going down side. I couldn't find it as I had no idea of what I was looking for. Bright idea! I would take a picture then enlarge it when I got to Karen's. It was supposed to be a cute poster.

Fifth, it really isn't very hard to do. Since the going down side was on my left, I had to turn in that direction. I had my camera pointed over in that direction. That necessitated holding on lightly to the rubber rail with my left hand. Somehow I lost my balance and fell backwards.

Sixth, falling backwards going up an escalator doesn't get a person anywhere very fast. I sort of tumbled in place I was told. Everything I tried to grab hold of to help stand was always whisking along going backwards, down.

Finally I was able to grab and hold again the rubber rail which was moving in my direction, up. A lady who was following me up asked if I was alright when we got up. And Karen, Billy, and Mrs. Jim were concerned as well. 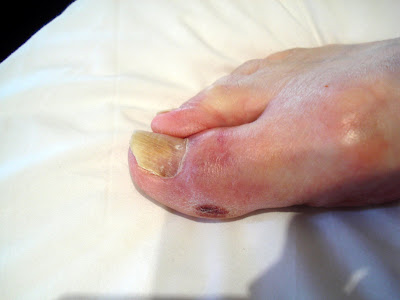 Here is a picture of what my foot looked like the next day. It was very sore and hurt whenever I leaned forward on it.

Most of the pain was centered around my big and next toe. It is still swollen a little now. I fell on July 17. 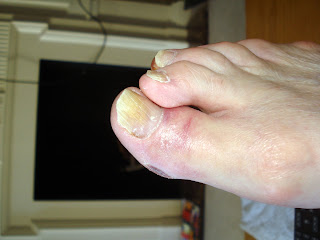 On the left you can see what it looked like about a week or so later.

No, the fall didn't weld my toes two and three together at the bottom. I am slightly web toed and was from birth.