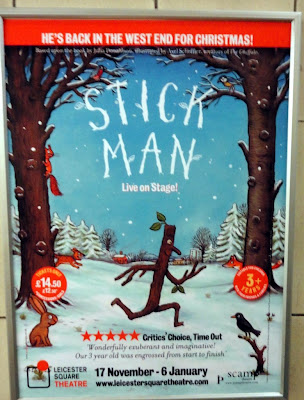 I read the book by Julia Donaldson at the St. John's Wood Library the other day.  It is a very good children's book.

Do you know the meaning of the word, Busker?  It was a new word for me that I found in another children's book by Donaldson, Tabby McTat. They didn't teach me this one in my American public school education.

Busker definition: a person who entertains in a public place for donations.

In the book, Tabby McTat was busker’s cat and followed him all over wherever the Busker man performed. But they became separated. There was surprise ending of sorts, you need to read it (a Tabby McTat review).

Back to Stick Man, the play is not only for children per what I am seeing from reviews (Google search link).   I would like to attend a performance but we have left London (U.K) and are now back in Texas.

Describe your life (or something) in a phrase using just six words for Six Word Saturday. Click the box at left to visit Cate's blog with Mr. Linky showing all the other blogs participating this week. Cate is the boss at Six Word Saturday. She would like for you to participate. 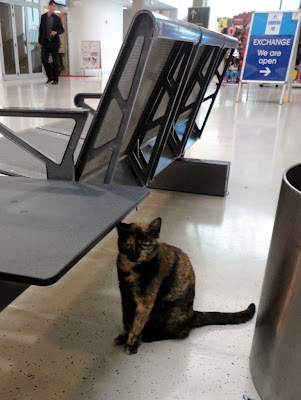 I found this cat waiting for me at the Dubrovnik, Croatia, airport.  She was very friendly and for sure was seeking me out. That could have been because I was finishing off my breakfast remains before going through security.

I won't say that she was particularly a pretty cat but her friendliness made up for that.

Cats must be a protected species in Croatia, we would see several every day (I'll post some more here sooner or later) for our old town Dubrovnik weekend stay.

Dubrovnik was a little respite from the busy London atmosphere that we were subjecting ourselves to for the last three weeks (October 16 through November 6).

For more Feline Friday cat pictures, you can to Sandee's blog here.
Or go to Steve at http://burntfooddude.us/ as he is the author of this meme.

— My Alphabe-Thursday, Yellow Cars I Have Known — "Y" — Two Questions — 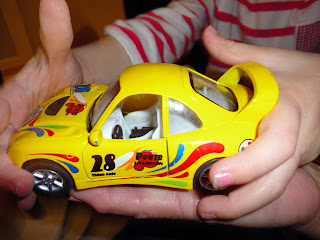 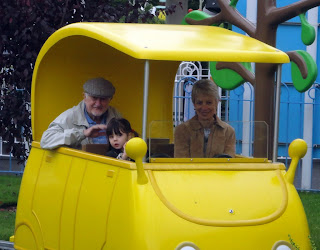 "Y" is for the Yellow Cars I have known.  Posted here are a few.  You can click on any of the pictures to see a larger size view.

Above left, is a toy car belonging to KP's friend who is three years old.  It is one of his favorites.  On the right, with Mrs. Jim 'driving', is a toy car at the Peppa Pigland Park near Southampton, U.K. where we visited while on a British holiday the last three weeks.  Did you note that the other two passengers, KP and me (JIM), are hanging on tightly? 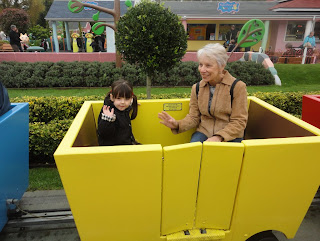 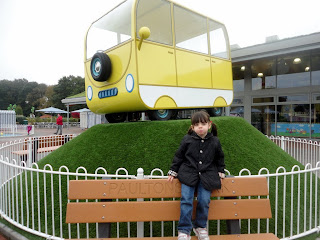 Now we see the railroad Yellow car, again transporting KP and Mrs. Jim.  Then there is the Peppa Pig Yellow Bus showing off at Peppa Pigland. 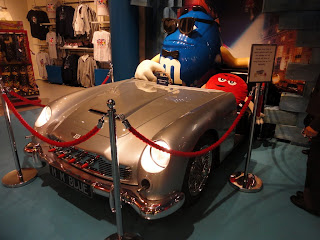 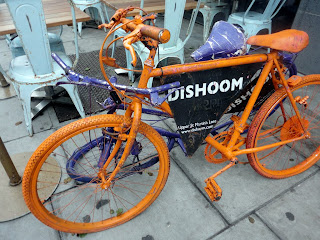 I know, this car is not a Yellow Car.  It is brown.  What makes interesting is that the car is the M&M car at the super interesting M&M Store in London, U.K.  We could only wish that one of these M&M characters would have been Yellow.  The bike, it is sort of Yellow but definitely not a car. 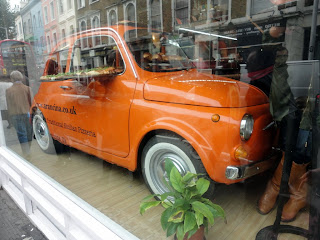 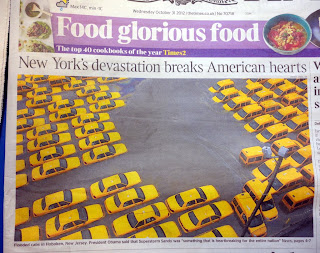 Again, a not so Yellow Car.  But it is a car.  And for those of you who like reflections, 'eat your heart out.'  The next picture you may have seen.  This one was in a London newspaper lamenting the flooding of all these Yellow Cars in Hurricane Sandy flooded New York. 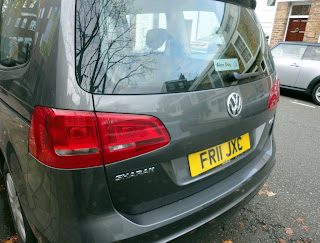 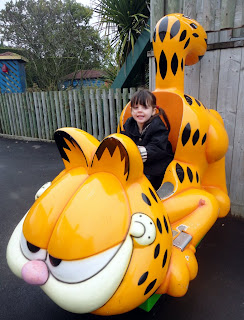 Just thought you'd like to see a Volkswagen Sharan car.  I had never seen one before here but this one is running around on the London streets.  Also it does have a Yellow license plate.  The spotted Yellow animal here is probably a giant Yellow Car Cat.  At any rate KP liked to ride in it even if nobody donated a coin to make it gyrate. 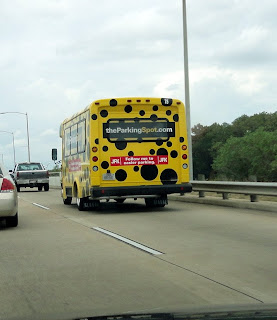 This vehicle is another Yellow Bus (Car) that shuttles people to and from the parking lot and airport terminals. This company has coupons to lower their rates to below the competitors. It also might be the one that has covered parking.

The vehicle below is a Yellow service Car for the railroad.  They used to be hand cars but this one is too large for that and has an engine.

I found it at one of the the Cinque Terre, a region composed of five villages on the Italian Riviera.   It appears to have been 'out of service' for quite a while. 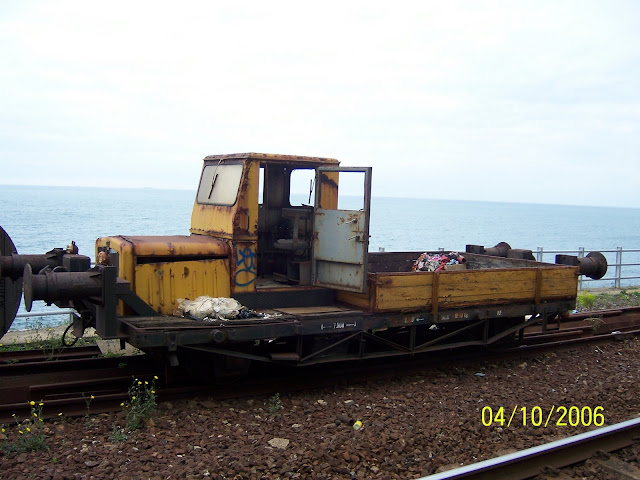 
My Two Questions for this week (you can answer just one if you wish):
..er
1. Do you have or have your ever had a Yellow Car?  If so, have your found an advantage to having it Yellow versus another color?
. aell
2. Do you think there is a stigma concerning having or driving or riding in a Yellow Car?.


Bonus Question: What is your favorite "Y" word?.

Oh Darling, I love you so. I will miss you so terribly much when I go.

Then let us get married.


°°Grandma of Succinctly Yours Week 85 gives these directions:
°°Use the photo as inspiration for a story of 140 characters OR 140 words or less.
°°Word of the Week, 'cynical ', was furnished by Grandma.  Implied here but word was not used.