My New Camera Finally Got Here!!! 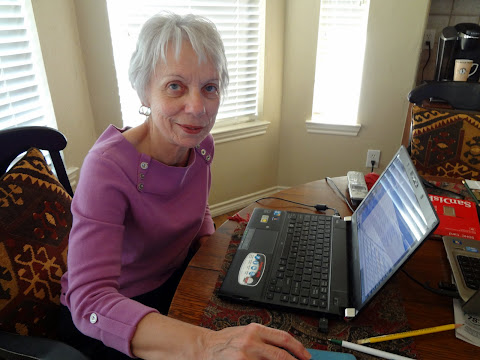 Here are some of the first couple of day's pictures with the camera.  Mrs. Jim has honors with the first picture taken, and now posted to my blog.  I missed having a camera while this one was coming but finally it came.  Remember (link scroll down to the Two Quetions part) that I washed my old one because I didn't check front pants pockets when I did my clothes washing.

The new camera is another Sony pocket camera, this time a Sony DSC-WX50, a 2012 model.  Being a 2012 model means reduced price.  It was listed at $199.99 but I doubt many were sold at that price.  My price was $107.95 from an Amazon.com associate supplier, Roberts LP.  Not being from Amazon itself eliminated $6.80. T e x a s . sales tax.
So far I am fairly satisfied with the camera's operation.  I don't like the 'in camera' battery charging set up but then we already have here two Sony external battery chargers from other cameras.  The packaging was the worst I have ever had come through the mail, there was NO INSIDE PACKING to stop the camera box from rattling around inside a larger box. And the twilight picture had a lot of round light spots, I don't know where they came from. 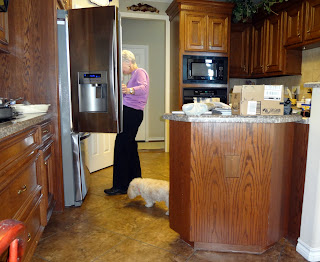 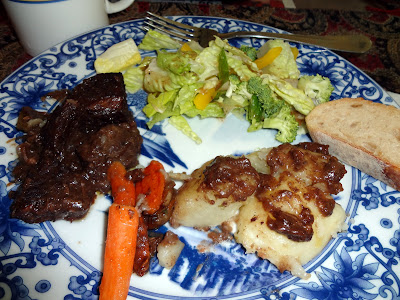 Mrs. Jim and Katrin here are scrounging in the refrigerator for us some leftovers for lunch.  Mrs. Jim did well with these left over from our Tuesday evening domino group dinner. 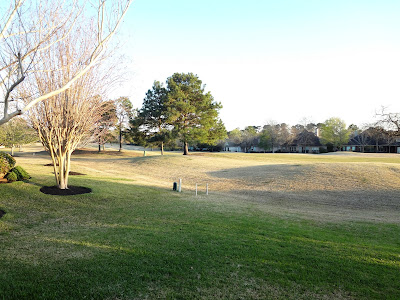 Next comes a back yard picture followed by two side yard pictures.  The golf course is dried grass mostly yet due to a late heavy frost.

You can click on any picture to make it larger.

The side yard pictures below are of the back porch and the greenery on the property line.  The right hand picture shows the red bud tree pretty good. 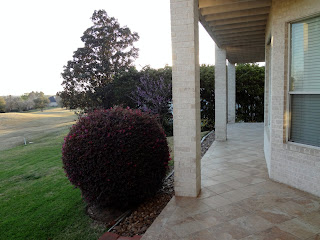 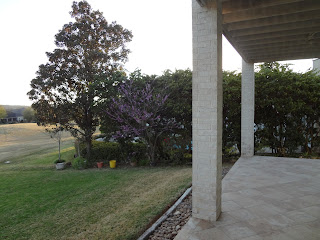 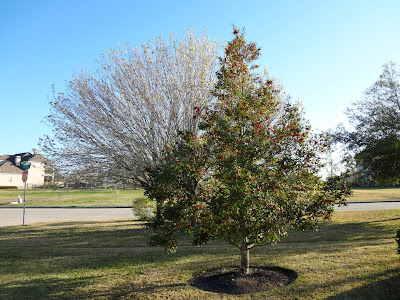 Here is a front yard picture.  The ornamental pear trees in front are starting to bloom.

The holly tree in front here has its berries starting to fade.  They soon will drop and the birds will pick them up for us.

Below is a before and after picture of Katrin.  She had a trip to the groomer today.  I can get three haircuts for the price of one for Katrin.  But then mine last three times longer so we come out about even. 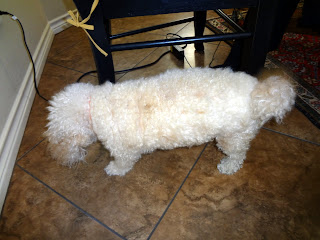 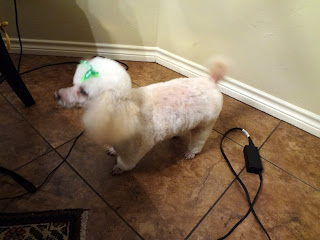 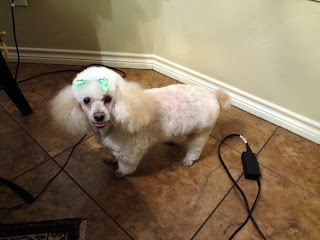 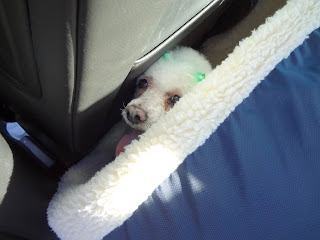 She gets pretty shaggy between her cuttings.  Mrs Jim will trim some in between times, especially around her eyes.  While Katrin was getting her cut Mrs. Jim and I played a round of golf.   Neither of us were up to our usual so so game as each of us for differing reasons had not played for a couple of weeks. 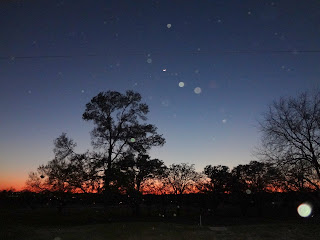 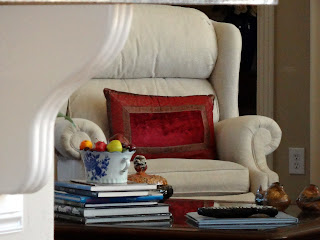 Here are a couple of trial pictures.  At left is my twilight shot of the moon.  The Moon is not any of the round items as it was a sliver moon.  It is the small dot, second from the top of the slanting upward four above and right of the tree.  My drowned camera would not take pictures of the moon.

At left is a trial of the zoom function.  I was sitting beside Mrs. Jim, top picture here, and the chair was thirty feet away in the living room.  I think it did pretty good.  This camera zooms five times with the lens and five more digitally after the lens is fully extended. 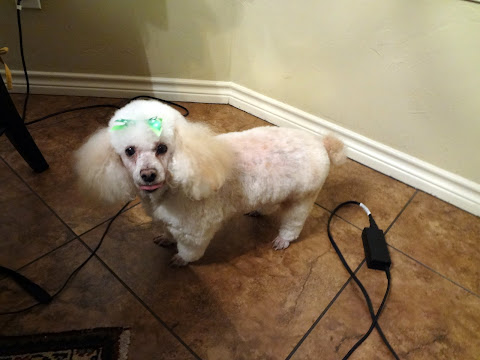 The green on Katrin's head is a St. Patrick's Day
ribbon that the groomers put on her.

Happy St. Patrick's Day to you!
(be sure to wear green tomorrow
so that you don't get pinched.) 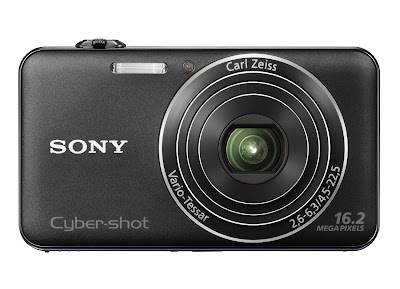 Feline Friday -- Cats are here and then they're gone 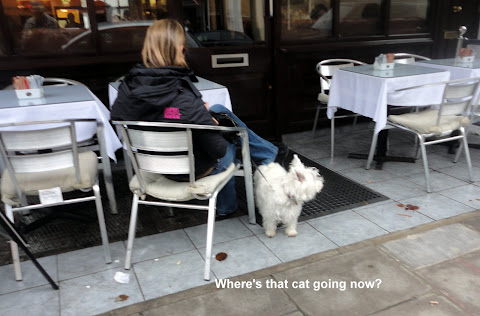 For more Feline Friday cat pictures, you can to Sandee's blog here to Actually SEE some of the ones with cats (and not missing cat pictures, just this one).  Next time I will find the missing cat, I promise.  Well, not this one, she lives in London and we are back home now (picture taken October 22, 2012).

Also, "March 15th celebrates Everything You Think Is Wrong Day, a day that we realize we are not always right. It is a day that maybe we want to avoid making decisions. Today is also a day that we do not want to start out our conversation with the words…. ” I think”.  Read more, here (you'll have to scroll down to the second article, it's another national day today also).

Yesterday was National Pi Day.  I had a little poem on my other blog (link to Jim's Little Photo and Poem Place) in commeration of 3.14 (March 14).

Pussycat, pussycat, where have you been?
. 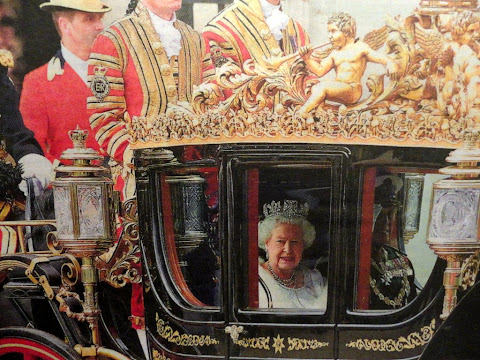 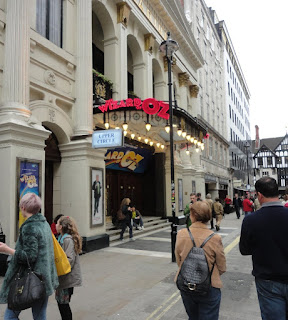 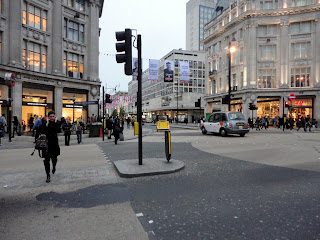 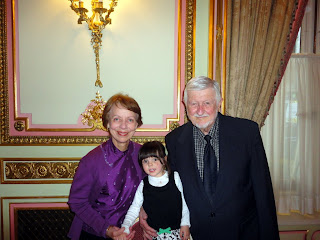 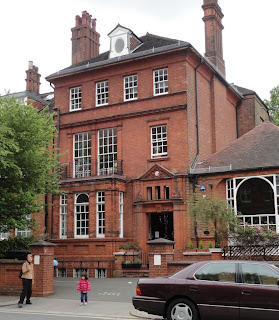 "Q" is for Queen ~~ Not very original and neither is this post.  It is a rework from one I did last Spring.  We were in London to visit our daughter, two granddaughters, and SIL, all of whom are living there as ex-Pats.  Karen was to run the Paris Marathon (she finished!) on April 15th so cheering her on was our excuse for going at that time.  I wish we could go this April but that is up for discussion right now.   .two
Above﻿ left are Mrs. Jim, KP, and myself, all dressed up for tea at the Ritz Hotel.  Karen (her account of the tea) was with us as she sprung for the tea as a Mother's Day and Father's Day present from their family.  Right is KP's school.  She is in the three-and-a-half-year-old class.  This is her 'fancy dress' in the hotel picture.   To school she wears a blue uniform with white shirt to class. 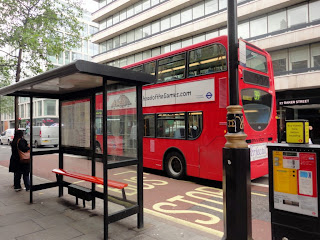 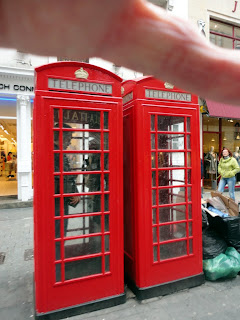 We didn't see the little mouse but we did see the Queen.  I tell people that she waved to me.  She was in her carriage, waving all her way to address Parliament on their opening day.  I had brought my camera but wouldn't you know on this particular day I left the battery at the flat in its charger.  .
So this picture I did not take but rather it is a press release photo which I photographed with my camera.  I read an editorial about whether or not the royalty is covering its expenses with admission fees to the palaces, etc.  There was another about doing away with royalty like most other countries have done.

[BTW, my new camera did come yesterday.  I've charged the battery but haven't read the book or turned it on yesterday.  The shipping was lousy (an Amazon dot Com supplier.  It rattled all the way from Lexington, KY, to our house in a box large enough to hold three cameras with NO PACKING paper or peanuts, etc.  We will see.  Amazon will hear.  I will give poor rating (or return it).]
Judging from the size of the crowd we saw there for her that day, a measure like that would never get enough votes.  I think royalty is here to stay for a long while in Britain.  They love their Queen..
The rest of these pictures are typical London tourist type pictures we took on other days.  On this particular day we went on to visit St. Paul's Cathedral.  Sorry, no pictures from their either.  Our English friends from Northampton accompanied us and were showing us the sites and had found a good place for all of us to stand to watch the Queen's carriage ride on her way to the ceremonies..
Our holiday lasted one month, from April 11 to May 11 (2012).  We flew directly from Houston to London and stayed with our daughter, Karen.  That Saturday we took the Eurostar RR through the Chunnel to Paris.  On Sunday we cheered her on as she ran the Paris Marathon.  We came back to London that evening.  On the following Saturday we began an 11 day Princess cruise from South Hampton to the Canary Islands, returning to London on May 3rd.

My last post last week was about an "P" word, Player.  It referred to my golfing handicap and about my playing golf.
.
My Two Questions for this week (you can answer just one if you wish):.

1. What royalty or governmental leaders have you been up close with and what were the happenings for you then?
I was fortunate to have shaken hands with President Johnson when when he visited the Control Center at the Johnson Space Center (NASA) in Houston.  I worked in the Control Center in my third career which lasted seventeen years.
Later in my 4th career, Business Professor at San Jacinto College, it almost happened again.  I did get to touch the 'hem of his gown' as President Clinton walked by after a presentation to some (a ticket affair, I had the luck of the draw) there with some of the students and faculty.

2. Tell if and why or why not you think that our country (U.S.A.) or yours needs a king or other royalty?
I think it would be nice and might give more prestige to our national leaders.  As of late our presidents have become the but of nasty criticism regardless of what party might be in power.  I think the worst probably started at the Viet Nam War period and has continued since.
If I were king I would hope to rule and not be a figure head.  Do you know that the Queen of England is the Commander-in-chief of the Britsh Armed Forces? .

1. What is your favorite "Q" word?
==> My Questions here are for Amanda at her Thursday Two Questions blog, Self Sagacity.  Please visit her there for here questions and links to other partakers of her fun blogging idea.

Jack was wondering why he was always on the bottom, never was he partaking of the party at the top.